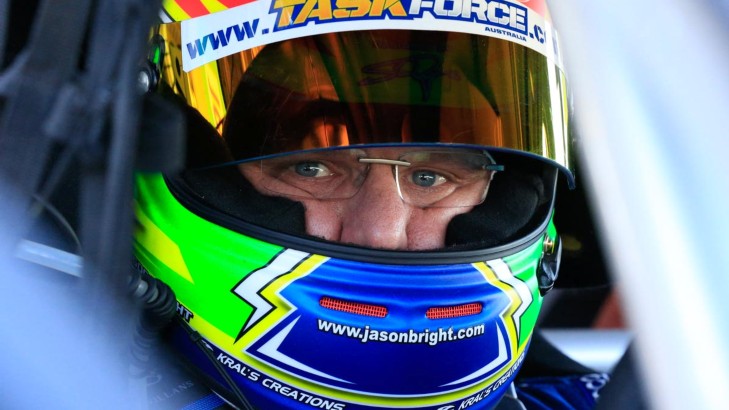 But it is Jason Bright -who elevated from ninth in qualifying to start from first on the grid with a stellar 1min13.1829 lap early in the session -who had to wait it out to see if he would be knocked off the top spot.

Shane van Gisbergen and Jamie Whincup came tantalisingly close, though both made minor errors to drop them in the order.

Craig Lowndes was last out for the one lap dash -and amazingly recorded a 1min13.0978.

However, a penalty from yesterday's Race 20 means he will not start from p1, losing two grid spots after contact with Race 21 winner Garth Tander.

"It's one of those things, you do all your hard work but you know you'll be relegated two spots," Lowndes said.

"The best thing we could do, was do the best we could. Through qualifying and then the Top 10 Shootout -the first time this year they've had that experience. It's obviously looking forward to the race.

"The car's feeling really good at the moment."

For Bright, it's his second pole for the year - he will be looking to get his Championship back on track, after dropping from the top 10 yesterday.

"To stand there and watch everyone get close was pretty difficult!"

Will Davison will also lose two grid positions -so he will fall out of the top 10, from ninth to 11, elevating Tim Slade to 10th, and meaning all four Walkinshaw Racing Commodores make the 10.

Just 0.9sec separated to V8 Supercars in the Shootout -the grid will be Bright on pole with Whincup alongside, Lowndes, Scott McLaughlin -who said he was "crapping" himself during the lap, yesterday's second race 1-2 finishers Garth Tander and James Courtney, Shane van Gisbergen, Nick Percat, Chaz Mostert and Slade.

06/07/2014
Stay In The Know
Sign up to the Virgin Australia Supercars Championship Newsletter
We use cookies to ensure that we give you the best experience on our website. If you continue to use this site we will assume that you are happy with it.Ok