Saturday winner van Gisbergen passed Reynolds early in the final stint and never looked back, while Garth Tander completed the podium for Garry Rogers Motorsport in another ZB Commodore.

Last year’s title protagonists, Jamie Whincup and Scott McLaughlin had tough days; Whincup failing to finish with a transmission failure while leading and McLaughlin 10th after being delayed by a puncture.

The 250km, 78-lap contest went without a Safety Car, with the winner completing the journey in just one hour and 48 minutes.

With the weekend’s results, Red Bull Holden Racing Team driver van Gisbergen leads the championship with a perfect 300 points over Reynolds on 258 and James Courtney on 240.

After their problems, McLaughlin and Whincup are fifth and 15th – on 207 and 102 points –respectively.

Whincup took the lead off the line with a slick getaway from second and looked well on his way to a first win on the season.

He made his first stop on lap 16 and emerged five seconds clear of van Gisbergen as the effective race leader.

That margin only grew over the next 15 laps and was out to more than 10 seconds by the time Whincup slowed with a transmission problem and crawled back to pitlane.

The retirement was Whincup’s first in 136 Supercars races, a run dating back to the Saturday Gold Coast race in 2013.

It made van Gisbergen the effective leader, even after making a longer second stop to account for pitting early for the first time, on lap nine.

Van Gisbergen made that second stop on lap 42, one lap after Tander - whose first stop came on lap 17 - and emerged just ahead of the GRM Commodore.

Reynolds stopped three laps later and rejoined right in front of the pair, and did well to keep them at bay into Turn 4.

That cold-tyre resistance only made it to Turn 9, though, where van Gisbergen went past down the inside.

Reynolds and Tander stayed in touch as the laps ticked past, the Penrite Commodore lurking within six tenths of van Gisbergen into the final 10 tours.

However Reynolds couldn’t mount a serious challenge, with van Gisbergen recording his fourth-consecutive race win around the streets of Adelaide. 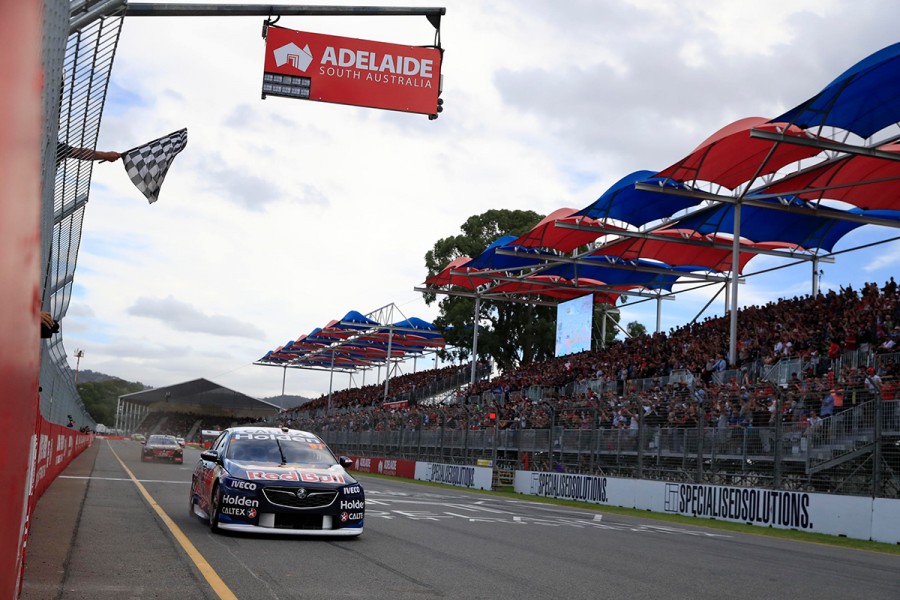 “I love Adelaide, that was just awesome,” van Gisbergen said.

“It’s such a shame for Jamie, he had the dominant car. We went the wrong way with our set-up and had to battle it out there.

“Davey was really quick and I expected him to battle me back.

“I can’t thank the team enough, it’s an awesome debut for the new Commodore.”

Having finished fourth on Saturday, second capped a strong season opener for Reynolds, even if he lamented not defending harder against van Gisbergen at Turn 9.

“I’m killing myself, but that guy is pretty good at this track,” he said.

“I didn’t expect myself to be that fast to be fair, I surprised myself.

“Al [McVean, engineer] did a brilliant job to tune it up. This is for his old man Andrew who passed away last week.

Tander worked his way into contention during a strong second stint, and ultimately finished 3.5 seconds behind in third.

“It’s pretty awesome,” Tander said. “I didn’t know what was going on then I saw Shane pop out just in front at the last pitstop and thought we must be close to the lead.

“When Dave popped out it was on for a couple of laps, but after that it was just managing it to the end, I didn’t have the speed.

“I think Shane was going just fast enough to stay in front of everyone, but third, we’ll take that.”

Mark Winterbottom was running in what was effectively fourth when he was handed a drive-through penalty for kerb strikes at Turn 2, with 21 laps to go. 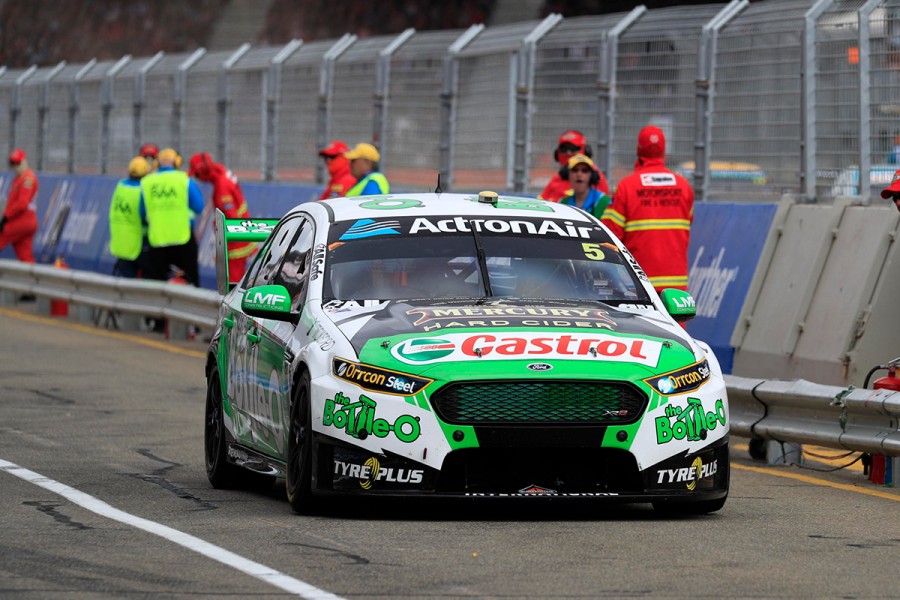 He rejoined 12th and ultimately finished 13th, elevating Chaz Mostert and Cameron Waters to fourth and fifth as the best of the Tickford Racing Falcons.

Courtney and Craig Lowndes made inroads over the course of the 78 laps to move from 14th and 17th on the grid to finish sixth and seventh.

Walkinshaw Andretti Autosport pitted Courtney at the end of the first lap to get him clean air, and he put that to good use before making a longer second stop.

Courtney and team-mate Scott Pye made minor contact just after the second stops, the latter finishing eighth, while Michael Caruso was the lead Nissan home in ninth.

McLaughlin was running right behind van Gisbergen during the middle stint of the race – before Whincup’s retirement – when he pitted with a deflating front-right tyre on lap 26.

Having noticed the issue, believed to be from debris, on the way to Turn 8, McLaughlin pitted but was not in range to make it home on fuel. 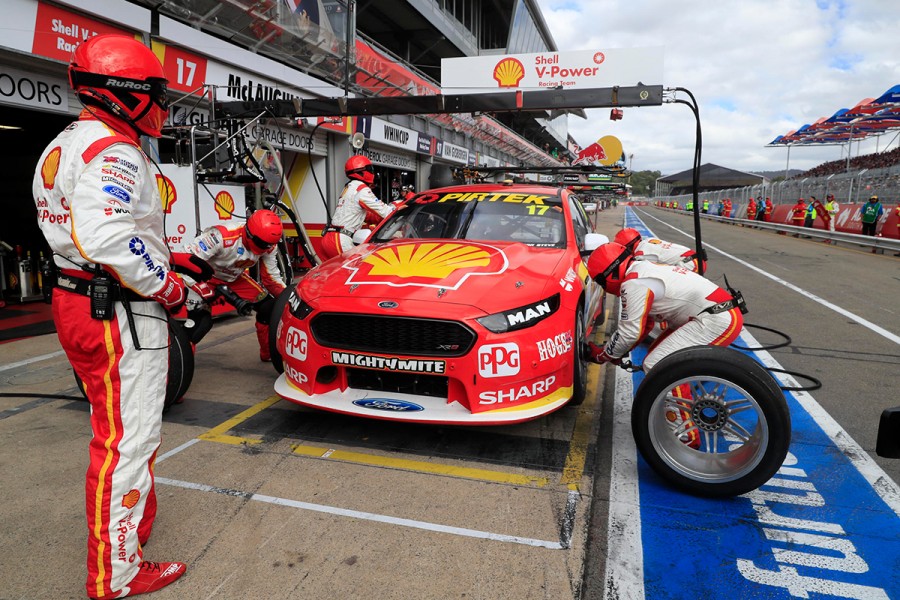 He stayed out before making an additional stop on lap 58, rejoined the race in 15th and picked his way through to 10th on the run home.

“It was going to be an awesome battle I think, we were really sizing them up there and unfortunately we popped a tyre,” he said.

“I think it was a bolt or something on the track that we unfortunately hit. It’s just one of those things.

“But we caught the leaders by 15-odd seconds, so we’re stoked.

“One day I’m going to get this Adelaide 500 right and get two days in a row, because at the moment I’m half job Harry.”

McLaughlin’s team-mate Fabian Coulthard was a largely-anonymous 16th, just ahead of the best of the rookies, Erebus Motorsport’s Anton De Pasquale.

Tim Blanchard, Lee Holdsworth and Andre Heimgartner were classified in 23rd, 24th and 25th, but lost considerable time due to mechanical problems.