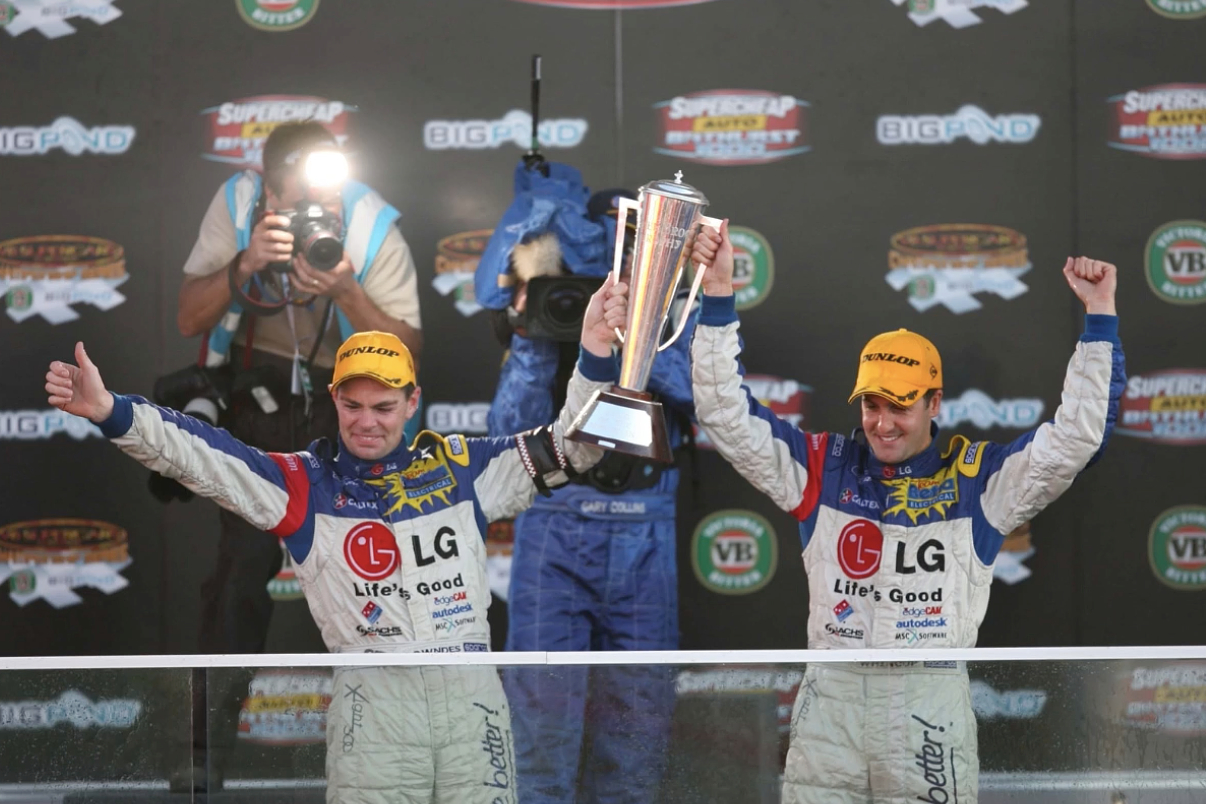 October 8, 2021 marks the 15th anniversary of the 2006 Bathurst 1000, which is arguably one of Mount Panorama's greatest - and surely most emotional - races.

In 2006, the biggest crowd in the event's history descended on the mountain to witness Craig Lowndes honour his late mentor Peter Brock in victorious style.

The mountain rose as one in shared mourning over the death of nine-time Bathurst winner Brock, who passed away just a month prior.

It was only fitting that his successor Lowndes won the first trophy awarded in Brock’s name.

Lowndes crossed the line just 0.586s ahead of Rick Kelly in what remains the fifth-closest win margin in Bathurst history, disregarding form finishes.

Race day began with Mark Skaife basking in the afterglow of a fine pole position.

The #2 Holden Racing Team Commodore was on rails from the moment it hit the track on the Thursday.

HRT had extra motivation to perform; the bonnets of both Holdens were black in Brock’s honour, and Garth Tander’s 2006 title chances lay with Skaife, having swapped with Todd Kelly for the enduros.

HRT’s chances turned to dust less than a quarter into the race; Skaife’s clutch slipped off the line, and was taken out by an unsuspecting Jack Perkins on Mountain Straight.

Jim Richards, in his 35th and final Bathurst start, crashed the #22 HRT entry understeering car on Lap 25 on the exit of the Dipper.

It was an emotional start to race day for Lowndes

The Lowndes/Whincup #888 Betta Electrical Falcon launched from sixth, with Lowndes working his way into an early lead.

It came after Ford Performance Racing’s Jason Bright surrendered the lead after he flat-spotted a tyre.

Lowndes cut an emotional figure before the race, steering Brock’s 1972 race-winning Torana in a parade lap before the start. 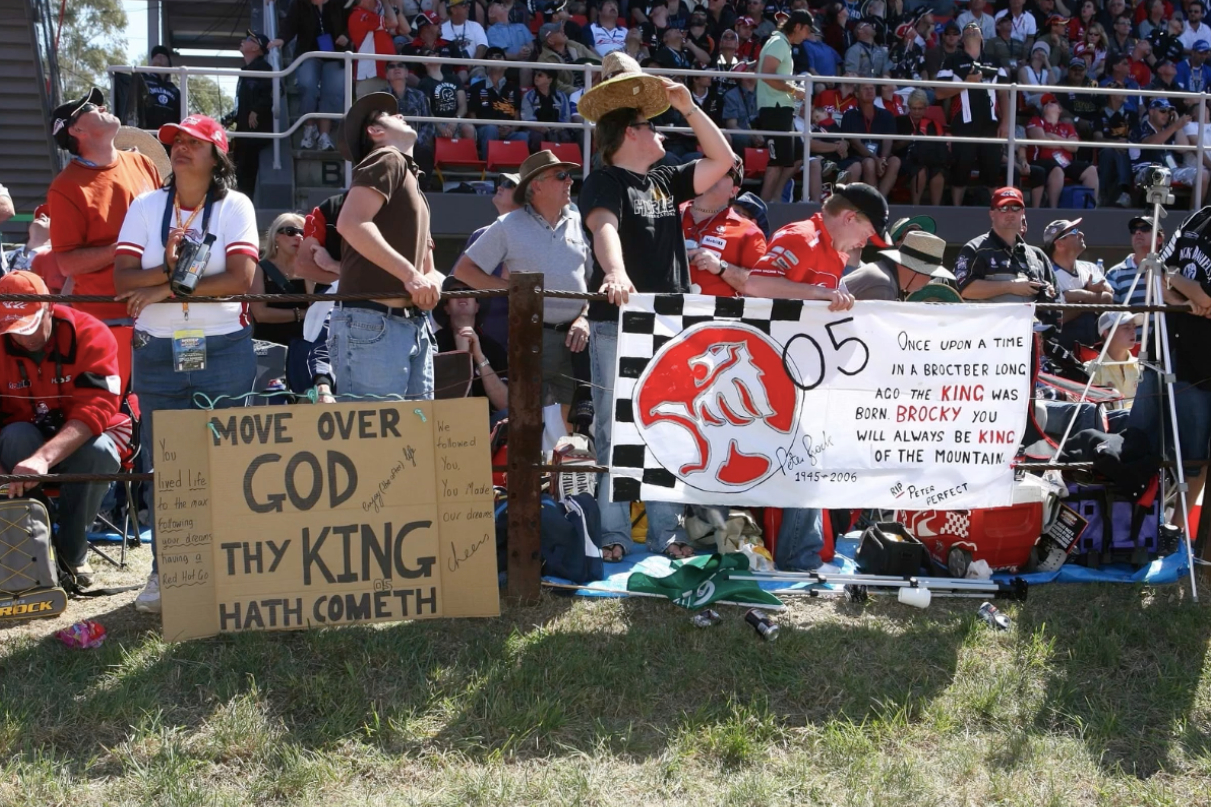 Brock was on everyone's minds on race day

He was a different beast in the race, however - so calm and resolute was Lowndes, that he even had time to crack gags to engineer Campbell Little in the opening stint.

One by one, the challengers fell away. Skaife and Bright didn’t reach half-distance, Steven Johnson crashed early on at Reid Park, and Cameron McConville found the wall across Skyline, ending Greg Murphy’s hopes.

Kelly and older brother Todd emerged as Holden’s brightest light amid a day of carnage.

The Kelly brothers had between them won the previous three races - Rick in 2003 and 2004, Todd in 2005 - and loomed to go one better from their second place at Sandown. 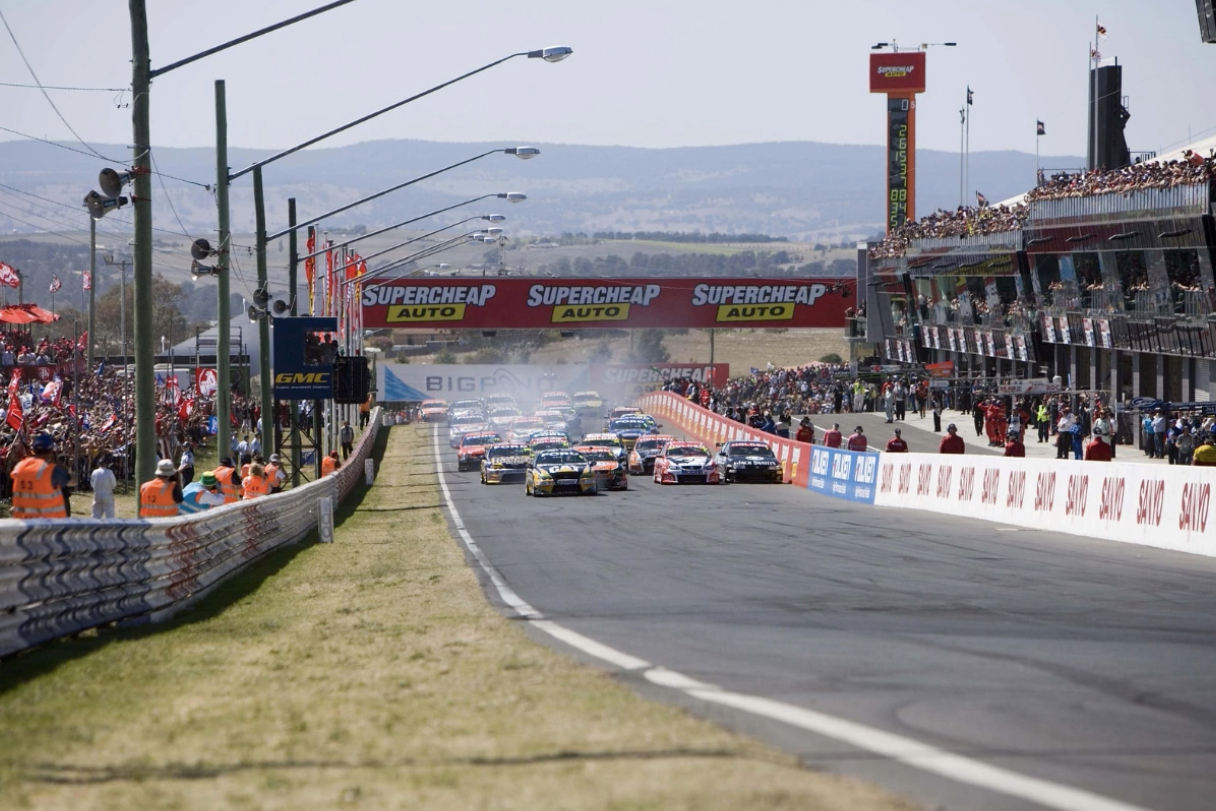 Skaife bogs down off the line

A critical moment came at a late restart when Whincup passed leader Todd at Hell Corner, before handing the car back to Lowndes in the effective lead.

Still, as Bathurst does, the script kept being re-written, Lowndes and Kelly having to contend with several different hurdles en route to the finish.

The 2006 race was one of the slowest Bathurst 1000s on record, and the slowest of the modern era not affected by rain or red flags.

A record 10 Safety Car periods saw 36 of the race’s 161 laps held under caution. 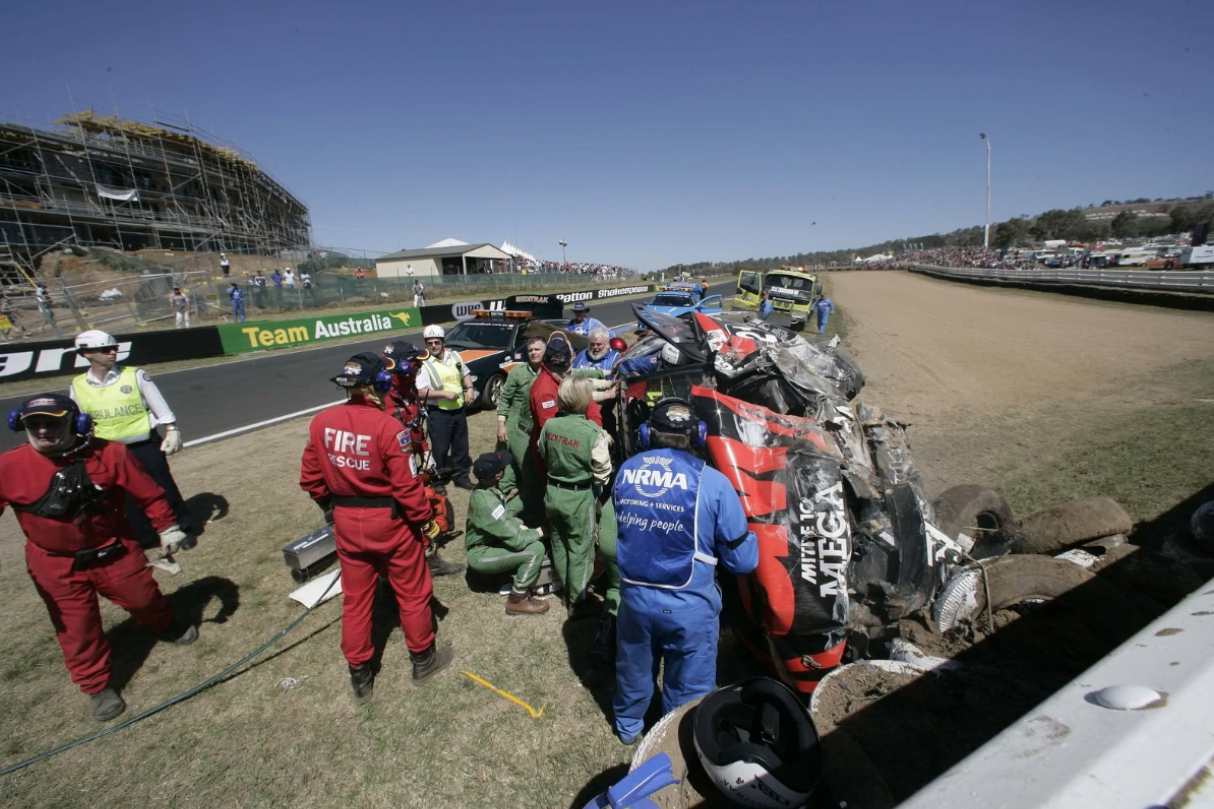 Radisich's accident had the race neutralised for half an hour

Notably, the race was neutralised between laps 74 and 84 following a scary crash for Paul Radisich on the exit of The Chase that left the Kiwi with serious injuries.

Jason Richards’ later off at The Chase set up a grandstand finish, and title combatants Lowndes and Rick Kelly drove away from the field.

The two cars were inseparable to the end, and Kelly’s efforts were made tougher when Richards triggered local yellows atop the mountain with a crash at McPhillamy Park. 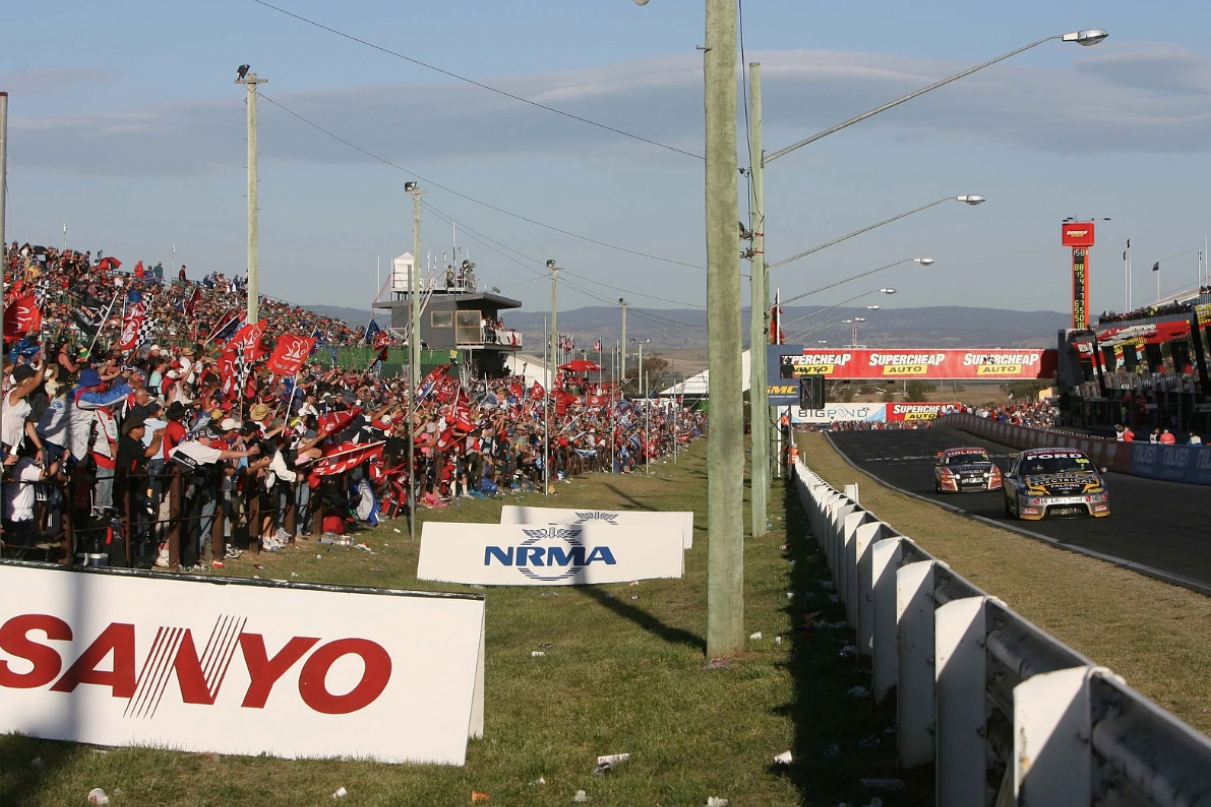 Third-placed man James Courtney crossed the line after seven hours had been clocked - but he narrowly beat Stone Brothers Racing teammate Russell Ingall to the podium by just 0.0056s.

However, the day belonged to Lowndes, who had honoured his fallen friend in the best way possible - winning the race Brock brought to the world.

"It is probably the most emotional race that I’ve had to do and it will always be the best victory that I’ll ever achieve,” Lowndes said a decade on from the race.

"There’s no doubt that for me, it’s a race I look back on and am really proud to get through that side of it. 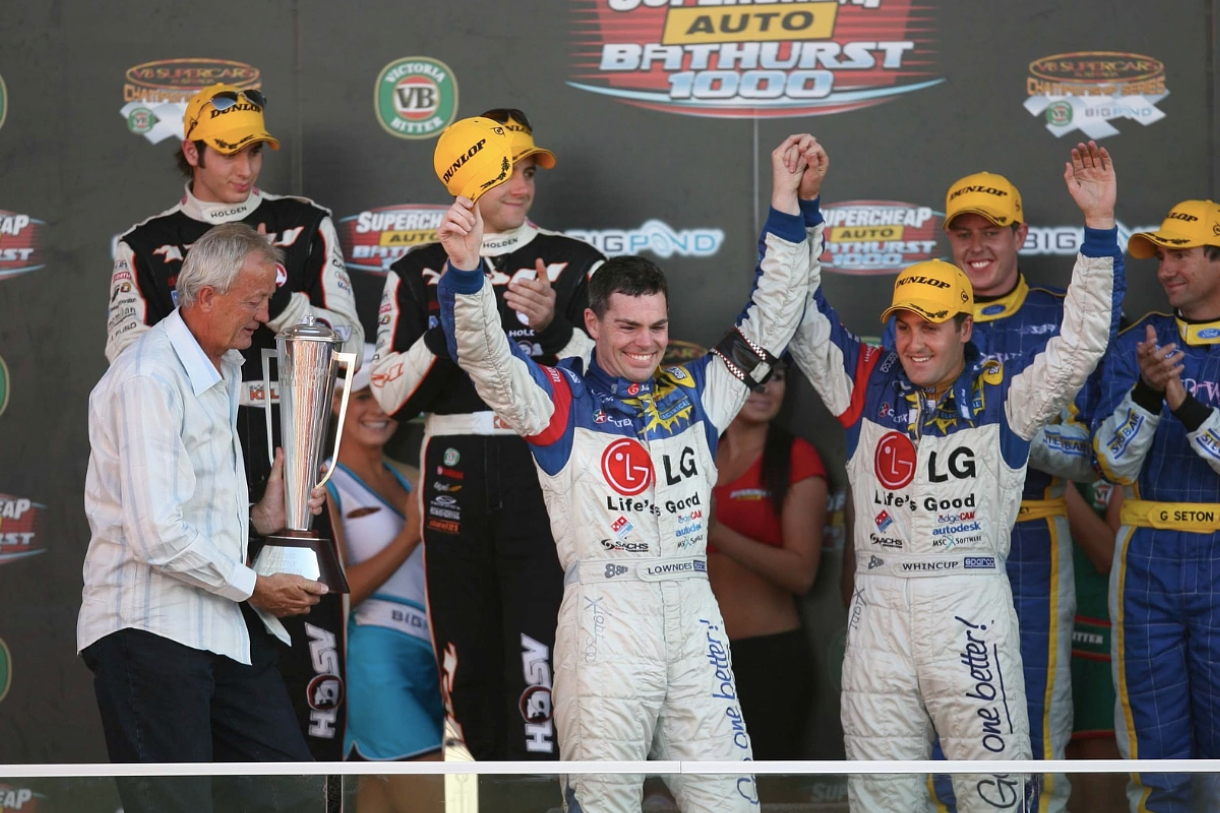 “We had a little bit of luck, which is something you need there over the course of the day at Bathurst.

"To have that battle with Rick Kelly at the end of the day was amazing.

"Having our name engraved on the Brock Trophy for the first time was quite special.”

Kelly beat Lowndes to the 2006 title at Phillip Island in controversial circumstances, but the latter’s Bathurst fire only grew stronger.

He heads to Bathurst in December looking for Great Race win No. 8 alongside Whincup, who is searching for his fifth and first since 2012.

The retiring Whincup will be hoping for a Lowndes-like repeat of 2018, with the latter winning in his final Bathurst start as a full-time driver.

'No way': Why retirement wasn't an option for Courtney

Trophy, cash prize up for grabs at Sydney quadruple-header