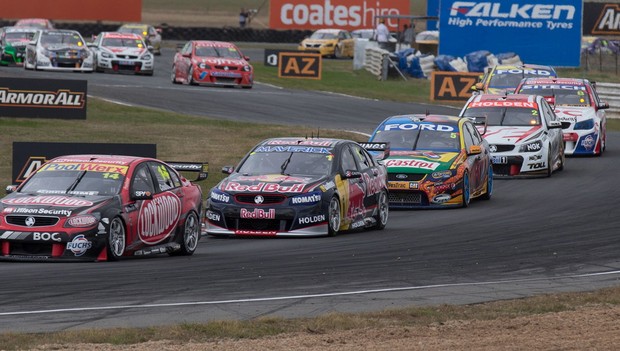 1. The return of the V8 Supercars Championship to Pukekohe Park Racewayin New Zealand marks the first time since 2007 the category has competedat the historic Kiwi circuit.

Thiswill be the eighth V8SC event at Pukekohe since the first in 2001 – which alsowas the first offshore event in championship history.

Thisyear will be the 13th time the V8SC has competed in New Zealand after Hamiltonhosted the country's V8 Supercar event for the last five years on a streetcircuit.

2. All drivers will be competing for the Jason Richards Memorial Trophyat Pukekohe named in honour of the V8 Supercar driver who lost his life to arare form of cancer in December 2011.

Aproud Kiwi, Richards was a three-time Bathurst 1000 runner-up who made 131ATCC/V8 Supercars Championship event starts between 2000 and 2010.

Hecompeted in every Pukekohe V8 Supercar event between 2001 and 2007 for TeamKiwi Racing, Team Dynamik and Tasman Motorsport.

Thisyear marks the 50th anniversary of the Pukekohe circuit, making it an extraspecial occasion for the creation of the Jason Richards Memorial Trophy andreturn of V8 Supercars to the venue.

Thenew trophy will be awarded to the driver that has the best combined resultsover the four races at Pukekohe.

3. It's a strange statistic, but after five races in the 2013championship, the top three drivers in the pointscore – Jamie Whincup, WillDavison and James Courtney – are all yet to win a race.

KiwiFabian Coulthard is the only one to have won multiple races, though he sitsseventh in the championship heading to his home event in New Zealand.

4. It's rare a statistic relating to Red Bull Racing Australia involvesdroughts and success eluding the Queensland-based team – but that is very muchthe case with its history at the Pukekohe circuit.

TheTriple Eight team is yet to score a race victory at the circuit, while itsdrivers Craig Lowndes and Jamie Whincup are also winless at the Kiwi venue.

Barringthe new Circuit of The Americas in Texas, the team has won at every other circuiton the 2013 V8 Supercars Championship calendar.

Bothhave been able to rack up second place race finishes before at Pukekohe(Lowndes in 2006 and Whincup in 2007), but no race wins.

5. There will be a strong local contingent of Kiwi drivers in the NewZealand event with four drivers out of 27 sure to attract plenty of homesupport.

OnlySymmons Plains winner Coulthard has raced a V8 Supercar at Pukekohe before,though the other three have all completed plenty of racing laps in othercategories at the circuit.

6. Pukekohe has traditionally been a circuit completely dominated byHolden in the V8 Supercars Championship.

Between2001 and 2007 there were 21 championship races held at the venue with 20 racewins to Holden and just one to Ford – taken by Marcos Ambrose in Race 1 of 2004for Stone Brothers Racing.

Holdendrivers have also dominated the pole positions in the past with five of theseven going to Commodore drivers.

7. More than half the field will be making their first V8 Supercarappearance at Pukekohe this weekend, though many of the drivers have competedat the venue in other categories.

Atotal of 15 of the 27 drivers have never raced a V8 Supercar at Pukekohe before:

8. Greg Murphy may not be racing full-time in V8 Supercars this year,but the ITM 400 Auckland event ambassador and Holden Racing Team endurancedriver is still undoubtedly the 'King of Pukekohe'.

Murphywon the event overall three years in a row from 2001 to 2003 for Kmart Racingand followed it up with another victory in 2005 for Supercheap Auto/PWR Racing.

Murphyalso won a non-championship V8 Supercar event at Pukekohe for the Holden RacingTeam in 1996, claiming a clean sweep of three race wins that weekend.

9. Ekol Racing's Scott Pye is in doubt for the weekend after his nastyaccident last weekend at Symmons Plains in Tasmania.

The2012 Dunlop Series runner-up crashed head-on into a wall and the damage to his#80 Commodore – coupled with the tight turn-around time before Pukekohe and thelack of an available spare car – has the team pushing it to get to NewZealand.

10. Just 12 drivers in the 2013 field were on the grid at Pukekohe thelast time the V8 Supercars Championship raced there in 2007.

Tanderhas the most Pukekohe race wins of active drivers with three while Bright hastwo with singles to Todd Kelly and brother Rick.

Ingall,meanwhile, has a 100% finishing record across all 21 races at Pukekohe and anunbroken streak of 11 top-10 race finishes at the circuit that he'll attempt tokeep rolling this year.

08/04/2013
Related Content
2013 ITM 400 Auckland  ›
Stay In The Know
Sign up to the Virgin Australia Supercars Championship Newsletter
We use cookies to ensure that we give you the best experience on our website. If you continue to use this site we will assume that you are happy with it.Ok