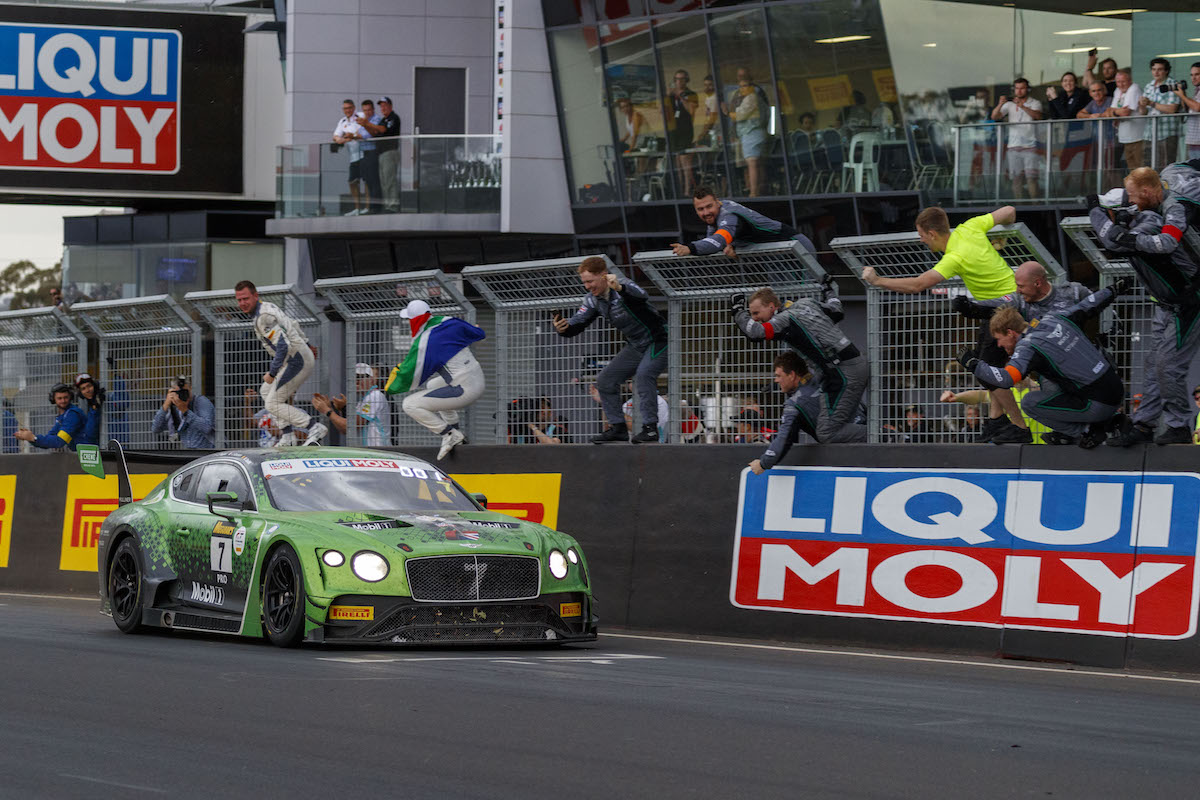 In its sixth year of trying, Bentley has scored a sensational breakthrough victory in the Liqui-Moly Bathurst 12 Hour.

The team’s #7 entry of Jules Gounon, Maxime Soulet and Jordan Pepper took the win after surviving a major scare when a tyre blew on Conrod Straight just over an hour from the finish.

Fortunately for Bentley, Gounon was able to pit immediately for his final stop, losing minimal time and escaping without bodywork damage.

When the final stops shook out 40 minutes from the end, Gounon held a comfortable lead from the #999 GruppeM Mercedes with Raffaelle Marciello at the wheel.

Weather appeared Bentley’s only real threat in the closing stages, as a forecast late storm loomed but ultimately failed to materialise until moments after the chequered flag.

"Every weekend our slogan is bring the thunder and I was like please, not now!" said Gounon.

"The car has been unreal all weekend, all race long, M-Sport has done a fantastic job.

"We had huge potential with this new car, this car is really, really good."

The chance of any pressure from behind was relieved with 10 minutes to go, when the Marciello/Maxi Buhk/Felipe Fraga Mercedes was forced to pitlane with a puncture.

Marciello returned to the track third behind the #60 59Racing McLaren, before a last-lap dive from the Mercedes driver reversed the positions once more.

However, the GruppeM car dropped from second to sixth in the final result thanks to a 30 second time penalty for failing to turn the engine off during its late unscheduled stop.

Van Gisbergen led into the final hour as the team held off on a final stop hoping for the rain to fall, before finally needing fuel.

The Kiwi spent the closing stages holding off Matt Campbell, whose pole-sitting #911 Absolute Racing Porsche eventually had to settle for what became fourth.

The #77 Craft Bamboo Black Falcon Mercedes was one of the hard luck stories, Maro Engel finishing fifth after pitting from third with a puncture 30 minutes from home.

It was a tough day for the bulk of the Supercars contingent, including Craig Lowndes, who co-drove the #1 Earl Bamber Motorsport Porsche with Bamber and Laurens Vanthoor.

The reigning winning team ended up ninth having lost two laps in the seventh hour when brake trouble forced the team to opt for a rotor change in the garage.

The #91 MARC II entry driven by Nick Percat, Broc Feeney and Aaron Cameron was 15th outright and the winner of the Invitational Class, after a fraught day for their rivals.

That included pitstop fires for the #95 MARC II entry early and late in the race, with Warren Luff onboard on both occasions.

The Silver Class Audi of Lee Holdsworth/Dean Fiore/Marc Cini was 17th after surviving a nudge from Whincup in the fourth hour that sent Cini spinning at Sulman Park.

There was little joy for David Reynolds, with the Pro-Am Class #75 SunEnergy1 Mercedes 20th after losing time with a variety of issues.

Chaz Mostert’s race was over just past half-distance; the #34 BMW’s engine having overheated as the result of an early collision with a kangaroo.

Co-driver Nicky Catsburg clipped the roo shortly after taking the wheel from Mostert in hour three, subsequently losing two laps while the bonnet was changed.

The biggest crash of the day belonged to Garth Tander, who emerged unscathed from a heavy impact with the McPhillamy Park tyre wall two and a half hours in.

Tander spun the #22 Audi as he tried to avoid contact with teammate Dries Vanthoor, who had run wide through the left-hander directly ahead of the Australian.

02/02/2020
Stay In The Know
Sign up to the Virgin Australia Supercars Championship Newsletter
We use cookies to ensure that we give you the best experience on our website. If you continue to use this site we will assume that you are happy with it.Ok