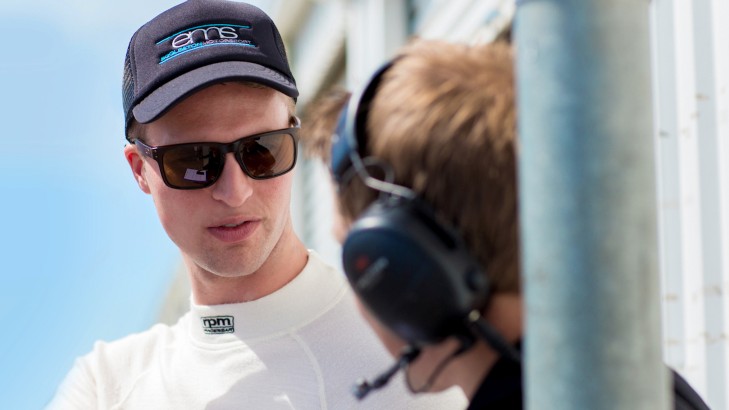 After recording a career best finish in the V8 Supercars Dunlop Series today, Eggleston Motorsport's Garry Jacobson has declared there's more to come from the 23-year-old.

The Shepparton-native defied all odds to take the chequered flag in second today, after jumping the start from third on the grid.

Despite redressing the mistake, Jacobson was dealt a five second penalty but managed to make the spot back up when Le Brocq surrendered the position after locking up at turn one in the opening laps.

His Egggleston Motorsport squad notified him of the impending penalty and from there Jacobson pushed hard to maximise his speed and spread a five second gap to third-placed Le Brocq and be unaffected by the penalty.

He credits his impressive form to the work he's been putting in behind the scenes with training, seat time in other categories and working with his Eggleston Motorsport squad to unlock some speed.

But now the benchmark has risen for Jacobson, and he is more than ready to rise to the challenge.

"I've been working hard and I'm feeling good about myself at the moment," Jacobson told v8supercars.com.au.

"I've been training hard and trying to stay as consistent as I can, and it's all helping me grow as a driver.

"Now it's just about executing more consistently so the benchmark will keep getting higher and higher for me and my team, and I think we can do it."

"I had used everything that the tyre had, I wasn't sure if they were going to hang on at the end of the race there," Jacobson said.

"But they certainly did, so I'm stoked we've been able to get the result.

"I've always had really good pace around Townsville and I love street circuits, so to come away with a personal best today I'm really happy.

"There's no reason why I shouldn't be expecting a good result tomorrow as well."

The personal best for Jacobson sees him move up to fifth in the series standings, 381 points behind leader Cameron Waters.

See if Jacobson can carry his momentum into tomorrow, with qualifying for race one at Reid Park kicking off at 9.15am.

Dumbrell eager to return to the top