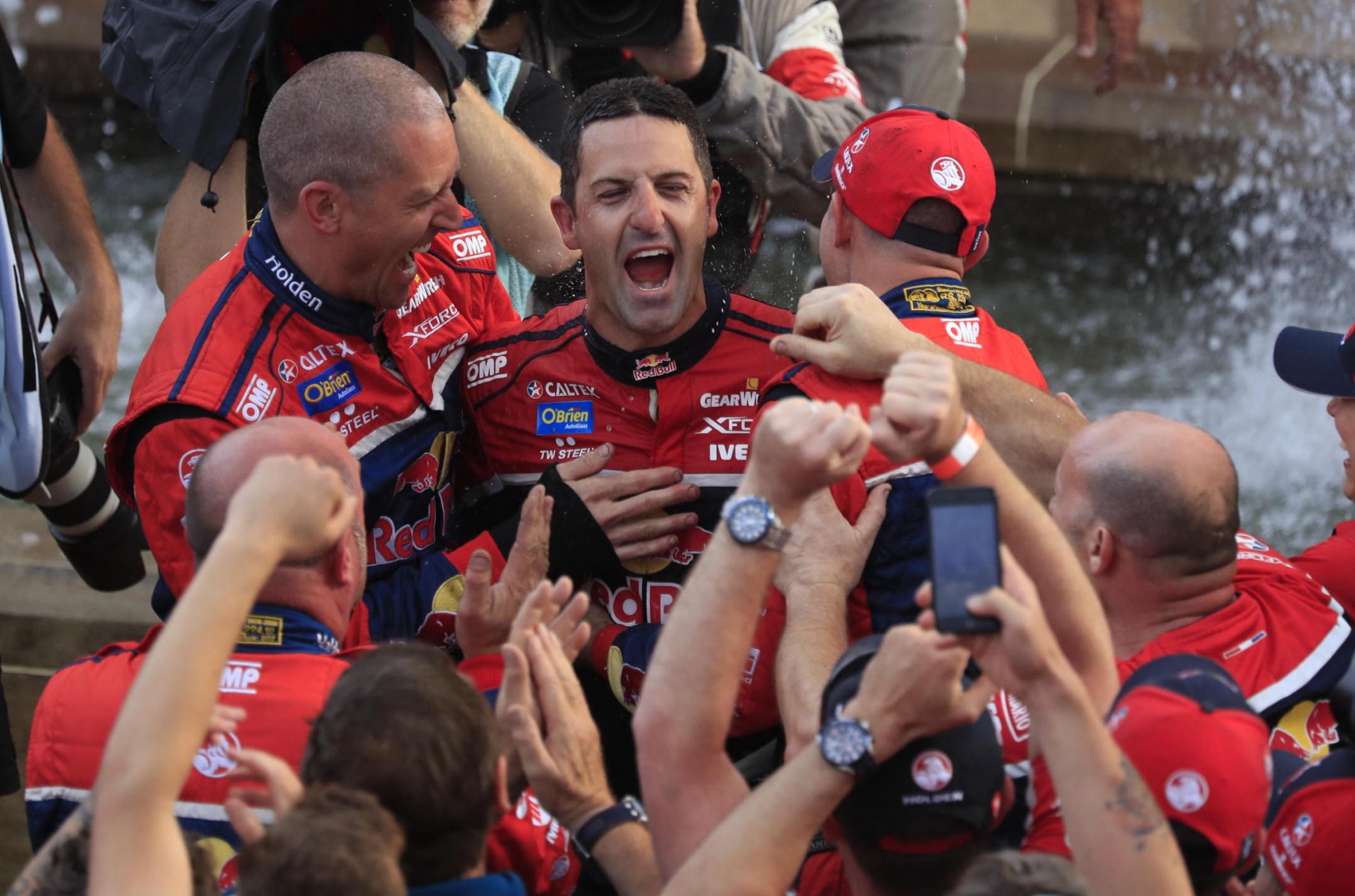 McLaughlin entered the day only needing an 11th-place finish to seal his maiden title and, having scored pole and won the start, he was in the box seat for success.

A trio of penalties throughout the contest, however, brought McLaughlin undone, the last of which was awarded on the very last lap.

McLaughlin had overtaken James Moffat for the key 11th on the penultimate lap before sliding wide as he went through Turn 1 for the penultimate time, allowing Craig Lowndes to gain ground.

The Shell Ford driver blocked but Lowndes was already drawing alongside and the subsequent contact pushed Lowndes into the wall, breaking his left-front suspension, spinning the Holden out of the race.

Deemed to have driven recklessly, McLaughlin was immediately given a 25 second penalty, to be added to his race time, dropping him to 18th in the final result.

With Whincup winning the race, the title went to the Red Bull driver by 21 points.

"I’m lost for words. I didn’t have a clue crossing the line, I assumed I came second and the crew goes ‘you’ve got number one'," said Whincup.

"What a rollercoaster, massive event, I’m just glad we were able to put on such a good show. We fought hard, didn’t have the quickest car all year, but it’s all about teamwork and sport’s all mental."

A clearly shattered McLaughlin said that he did not know Lowndes was alongside at the critical moment.

"I lost my left-hand mirror so early. I knew we were close, but I didn’t think we were that close, I just defended the line into Turn 2 and we got interlocked and I genuinely didn’t mean to push him into he wall," he said.

"To get pinged like that… I shouldn’t have even been there in the first place. That’s hard.

"To all our fans that stuck by us, our sponsors, I’m so sorry. I wish I could get it done for them but at least we got the teams’ championship. I’m 24 years old, I’ll have another crack yet."

McLaughlin had made the best of the starts from pole and led van Gisbergen throughout the first stint, with Mark Winterbottom, David Reynolds and Whincup behind.

The drama started when McLaughlin and van Gisbergen pitted together on lap 15.

While McLaughlin kept the place, a drive-through for speeding at the entry to pitlane soon followed.

McLaughlin dropped to 23rd with his penalty, which was served as Coulthard retired with driveline problems, while at the front Red Bull strengthened its hold on the race.

Van Gisbergen took the effective lead on lap 33 from Reynolds, who had jumped to the front with an early first stop, while Whincup also put pressure on the Penrite Holden.

McLaughlin methodically made his way forward and soon had the title equation in hand, before spinning Simona De Silvestro out of 11th on lap 46 drew a second penalty.

This time it was a 15-second time penalty that was served at McLaughlin’s second pitstop on lap 50, rejoining in 24th.

Reynolds again went first on the second stops on lap 49, but lost a place to Whincup when the Red Bull Holden made its stop two laps later.

McLaughlin rose again to 16th before a crash for Taz Douglas at Turn 7 on lap 54 triggered the Safety Car, compressing the field.

A pass on Chaz Mostert for 15th on the restart lap put McLaughlin back in the championship lead, before losing it again when van Gisbergen let Whincup through for the race lead.

Now needing to get to 11th, McLaughlin moved to 14th with a big dive on James Courtney on lap 65 and took 13th when Scott Pye let him through two laps later.

A second Safety Car was required for debris on lap 70 and the subsequent restart brought further drama.

Congestion into Turn 1 led to Jason Bright hitting the back of Pye, sending the Mobil 1 Holden spearing down the inside of McLaughlin.

McLaughlin suffered left-side hits from Pye and Bright, dropping him back to 14th and leaving his left-rear guard rubbing on the tyre.

He also had to contend, however, with Lowndes, who had joined Tim Slade and Chaz Mostert in pitting for fresh tyres under the lap 70 yellow and come charging back through.

Resisting Lowndes’ advances, McLaughlin finally made a dive on Tander on lap 90, bringing him within one place of the title.

McLaughlin made the move on James Moffat at Turn 12 on lap 93, again putting him in a championship winning position.

The mistake at Turn 1 and the contact with Lowndes then brought the third penalty, leaving surreal scenes as Whincup took the chequered flag and the championship.

Van Gisbergen ended up second ahead of Reynolds and the Nissans of Rick Kelly and Michael Caruso, while retiring Todd Kelly added to his team’s joy with a solid 10th.

As it happened: Coates Hire Newcastle 500