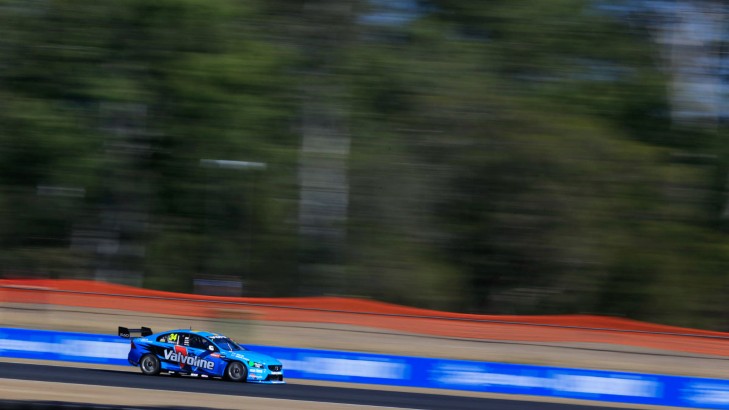 The likelihood of more Volvo S60s racing in the 2015 V8 Supercars Championship is climbing, but the chances of Swedish import Robert Dahlgren driving one of them appears to be diminishing.

Volvo's global motorsport boss Derek Crabb was at last weekend's Coates Hire Ipswich 400 and confirmed to v8supercars.com.au that car numbers and possible drivers to race them were at the top of his agenda in discussions with incumbent Volvo Polestar team owner Garry Rogers and other teams and sponsors interested in racing the S60 in 2015.

While unwilling to divulge just who he was meeting with during his visit, apart from Rogers, Volvo Car Australia boss Matt Braid and V8 Supercars management duo James Warburton and John Casey, Crabb made it clear his diary was busy and the prospects of at least doubling the number of S60s on the grid very real.

"That (the number of Volvos on the grid in 2015) is one of the things we are discussing," Crabb told v8supercars.com.au.

"That's why I am here now, to see what the market wants to do and what the home office wants to do.

The prospect of factory support being provided to run Volvos would no doubt be tempting to at least some of the teams contesting the championship which are currently not officially supported by a manufacturer.

Rogers is also understood to be open to the idea of expanding to run four cars out of his Dandenong facility.

"Obviously, I have talked to other teams," confirmed Crabb. "It is a whole range of conversations ... All sorts of options are being floated, some of which we are able to do and some of which we are not."On Dahlgren, who has struggled to move up from the back of the grid in a car Scott McLaughlin has starred in, Crabb was prepared to admit a change of driver lineup was possible.

"We are open, that is why I am here this weekend to talk to Garry about what he wants to do and what we want to do," he said.

"We are discussing a load of options, a part of which is drivers.

If 34-year old Dahlgren was to head back to Sweden, where his high public profile and talent as both a race and development driver are highly rated by Volvo and Polestar, it would create a vacancy in one of the most competitive drives in the 2015 championship.

Strongly credentialed drivers out of contract at the end of this year are known to include Erebus' Lee Holdsworth, Norton Hornet Michael Caruso - both of whom have raced for GRM when it was a privateer Holden outfit - and BJR's Jason Bright.

But Rogers, a renowned talent spotter, could also opt for more youth, a move which has paid off spectacularly well with McLaughlin. The driver salary expectations would also be lower for Rogers who is renowned tough negotiator.

Crabb supported the role Dahlgren had played in the establishment and development of Volvo Polestar Racing. He also acknowledged the toughness of the task the Swede had taken racing V8 Supercars.

"When the company's came together you had a Swedish base working with an Australian team and it was one way of exchanging staff," Crabb explained. "You have got Robert in there so we got direct feedback. Garry could ring me and Robert would say the same thing, so it linked us all together.

"He knew how Polestar worked and who the key contacts were so he could help Garry get stuff from us, so it worked at that level.

"Is it a big surprise that with new tracks and a new car someone is struggling to climb up?" he added. "Seven tenths of a second top to bottom (in qualifying) yesterday. No-one out there is slow. Yeah, I'd have liked for him to be in top five but it isn't going to happen if you are realistic."

Compared to the challenge of car numbers and driver opportunities, Crabb said finding sponsorship partners to come onboard with the Volvo program was proving less challenging.

"People have been impressed with how we have utilised Garry and his team and the Volvo brand and they think they could line up with that," he said.

Whincup: Winterbottom is still the man to beat

Frosty vows to keep on fighting