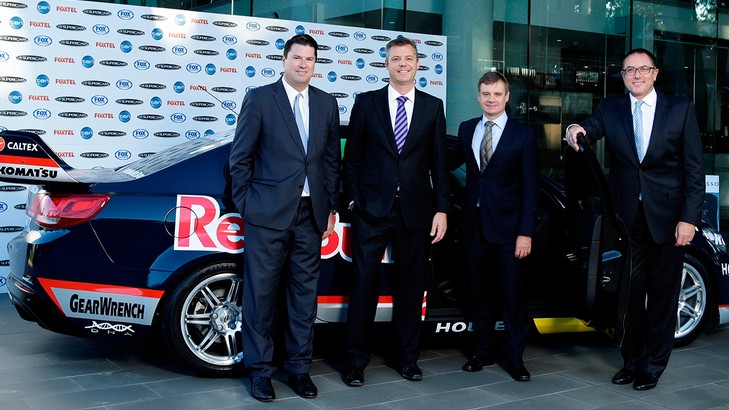 Today V8 Supercars announced a six-year, $241 million media deal with Foxtel, FOX SPORTS and Ten Network for all media rights including digital from 2015 to 2020, consisting of $196 million cash and $45 million of advertising.

It is the biggest deal ever inked for the sport and represents a significant increase on all previous deals.

V8 Supercars CEO James Warburton said: “This is a tremendous and significant deal for our sport. It is a great boost to our amazing race teams and fans and will lead to unprecedented coverage on multiple platforms for our sport, never before seen on such a scale.

“I would also like to thank Seven and their commitment to the sport since 2007 and of course their continued support for 2014, the final year of our partnership,” Mr Warburton said.

Foxtel CEO and Managing Director, Richard Freudenstein, said: “Foxtel is delighted to partner with V8 Supercars, Australia’s pre-eminent motorsport series. This relationship will significantly strengthen our sports offering and give yet another reason to subscribe to Foxtel.

“Hundreds of thousands of Australians love motorsports and I know that dedicated fans will be delighted that Foxtel and FOX SPORTS will be able to deliver a breadth and depth of coverage of the V8 Supercars Series that they’ve never seen before.

“Not only will the series be available in amazing High Definition on the Foxtel cable and satellite service, fans will also be able to enjoy all the action on the move with Foxtel Go or with the convenience of Foxtel Play.”

FOX SPORTS CEO, Patrick Delany, said: “V8 Supercars have a proud history of innovation. We relish the opportunity to work with talented V8 Supercars race teams and the team at V8 Supercars TV to give the sport the FOX SPORTS treatment – every minute of practice, qualifying, support categories and the Championship races – all LIVE and in stunning HD.

“We will be there for the fans and we will make no compromises in delivering them the finest coverage. We will focus on innovating coverage to take fans closer to the action, the heroes, the stars and the insights. There will be weekly entertainment shows to complement the LIVE race coverage and a massive promotional platform via not only our seven FOX SPORTS channels but the entire Foxtel platform,” he said.

Ten Network Chief Executive Officer and Managing Director, Hamish McLennan, said: “We are delighted to welcome V8 Supercars back home to Ten in 2015.

“V8 Supercars is an iconic Australian sport, reaching into every part of the country, and James Warburton and his team have big plans to make it even stronger and better.

“Ten is now truly the home of motorsport. Formula One, MotoGP and V8 Supercars will make a powerful, exciting combination for all our viewers and advertisers. Today’s announcement is in line with our strategy of investing in premium live sport and adding more Event TV to Ten.

“I'm personally looking forward to seeing the Supercheap Auto Bathurst 1000 and other great V8 Supercars events on Ten,” he said.

V8 Supercars has just completed its most competitive season which heralded the highly successful introduction of the new generation car and 17 different race winners.

Nissan Motorsport and Erebus Motorsport V8 joined the grid with strong success alongside traditional rivals Ford and Holden, while Polestar Volvo Racing will take on the field next year in two Volvo S60 Supercars.

The sport also announced new three-year deals with the Queensland and New South Wales Governments. This ensures the future of four marquee events on the Gold Coast, Townsville, Sydney and Ipswich, and adds an additional Championship event in Sydney at Sydney Motorsport Park in 2014.

The 2014 V8 Supercars season kicks off with the sydney.com pre-season test day at Sydney Motorsport Park (Feb 15) followed by the Clipsal 500 Adelaide from Feb 27-March 2.

- Joint deal with Foxtel, FOX SPORTS and Ten Network, including all digital rights

- V8 Supercars to be broadcast in high definition on Foxtel

Burgess Free to go to HRT