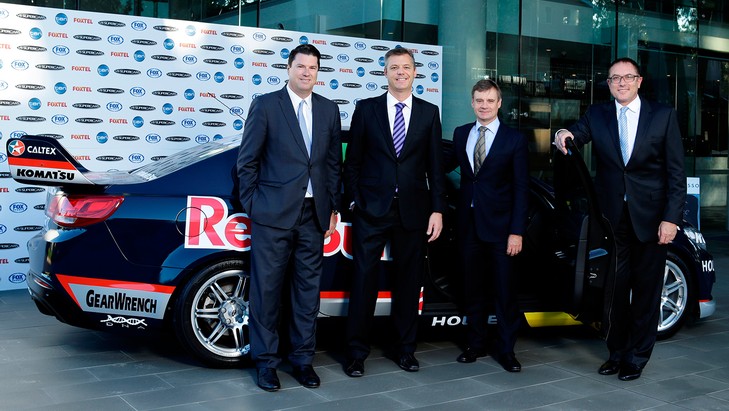 - Return of the highly popular motorsport panel show RPM on TEN; plus magazine shows V8Xtra and Motorsport 360 on FOX SPORTS.

- Daily highlights of every race on www.tenplay.com.au, plus special features and unique content.

V8 Supercars fans will enjoy more than three times the overall content after further details of the 2015-2020 media rights were revealed.

The record $241 million deal, the largest in the history of the sport, delivers sustainability to the teams that drive the sport and also provides unparalleled access for fans domestically and internationally.

It was revealed today that there would be 1140 hours of broadcast television across FOX SPORTS and Ten Network from next year.

That represents a 360 per cent increase in high octane TV, meaning more V8 Supercars more often and in more places.

Six major events – the Clipsal 500 Adelaide, Townsville 500, Wilson Security Sandown 500, Supercheap Auto Bathurst 1000, the Gold Coast 600 and the Sydney 500 – will be broadcast live and in full on TEN and simulcast ad-break free (with the exception of Bathurst) in HD on FOX SPORTS. All remaining events will be aired live and exclusive on FOX SPORTS, ad-break free and in HD.

FOX SPORTS race coverage will offer fans unprecedented access to the teams and drivers with optional camera angles, audio, and real-time statistics accessible to viewers via the red button functionality. All practice, ARMOR ALL qualifying and ARMOR ALL Top Ten Shootouts will also be LIVE and ad-break free on FOX SPORTS.

V8 Supercars CEO James Warburton said: “This deal provides the foundation for the sport in the future. It was a pivotal plank to get right. We have joined other mainstream sports by having a subscription television offering as well as a Free to Air offering.

“Importantly we have ensured that all of our races are available for free in one hour packages and guarantees our fans have more content than ever.

“In addition we have future-proofed our sport with the Foxtel digital platform and look forward to Foxtel and FOX SPORTS launching their V8 Supercar packages later this year.”

Similar to programs like Match of the Day in the UK, Ten Network will televise feature highlights packages of the FOX SPORTS-only events in prime time, delivering shorter, more action-packed viewing to larger audiences at peak times.

“Viewing habits have changed and will continue to evolve. This partnership offers the best of both worlds, enabling people to tailor their viewing as it suits them and their lifestyle,” said Warburton.

TEN will bring back the highly popular RPM. FOX SPORTS will broadcast preview and review shows before and after each event, as well as two dedicated motorsport panel shows each week.

Foxtel CEO and Managing Director Richard Freudenstein said: “Foxtel is delighted be working with V8 Supercars to bring the best of motor sports to the many fans who subscribe or soon will to Foxtel. Such an exhilarating sport deserves the special treatment that only Foxtel and FOX SPORTS can give - comprehensive coverage and with wonderful high definition pictures.

"We look forward to working with James Warburton and the team, delighting and exciting motor sports fans as they never have been before.”

FOX SPORTS CEO Patrick Delany said: “V8 Supercars fans are going to feel the difference in 2015 as we give our coverage the full FOX SPORTS treatment. Each round of the season will have LIVE race coverage on all days, including all practice, qualifying and Championship races, all ad-break free during the action and in High Definition. We’ll fire up the red button to take them closer to the sport than they could ever imagine.”

Ten Network Chief Executive Officer and Managing Director Hamish McLennan said: “We are looking forward to welcoming V8 Supercars back to their natural home – on TEN and ONE – in 2015.

“TEN will bring viewers and advertisers the six best races – live and free – plus compelling highlights packages of all the other races. We have worked closely with V8 Supercars to ensure free-to-air television viewers receive comprehensive and engaging coverage on both TEN and ONE.

“Our viewers will get all the live action, thrills, drama and excitement of the Clipsal 500 Adelaide, Townsville 500, Wilson Security Sandown 500, Supercheap Auto Bathurst 1000, the Gold Coast 600 and the Sydney 500, plus the best of the rest. It will be a compelling offer and we cannot wait to get it on air,” Mr McLennan said.

“With the addition of V8 Supercars to our popular coverage of Formula One and MotoGP, TEN is clearly the home of motorsport in Australia.

“The success of the KFC T20 Big Bash League on TEN and the XXII Olympic Winter Games on TEN and ONE have highlighted the value of premium live sport – and we are excited to add to that with V8 Supercars.”

Initial projections show that on conservative estimates and with prime time promotion on TEN, ONE and FOX SPORTS, V8 Supercars will grow its audience significantly, further adding to the long term strength and well-being of the sport.

“We have a responsibility to the fans to grow our audience which in turn keeps our teams healthy. Without healthy race teams we do not have a sport to deliver or for fans to watch,” said Warburton.

“This model allows passionate fans to watch substantially more V8 Supercars across multiple platforms as they choose while casual viewers have choice in how they watch and when they watch.

“Fans and viewers will also know when races are on with consistent timeslots.”

Foxtel will carry V8 Superview on Foxtel Go on Foxtel Plus 4 with races available as they happen.

Foxtel Go viewers can watch up to 60 live channels plus catch up on a range of shows they may have missed including sport, entertainment, documentary and drama channels and movie channels.

“This is another way for our fans to engage with our great sport whether it be at the beach, in the car or at the backyard barbecue - wherever they happen to be,” Warburton said.

Broadcast quality is optimised to suit compatible devices on 3G, 4G and WiFi, offering the best quality picture available to that service.

This weekend V8 Supercars builds on its successes of 2013 with the most competitive Championship on record, more race winners (17) than ever and a title that went to the wire last December.

The 2014 season commenced with the flagship Clipsal 500 Adelaide where more than 280,000 people were expected to flood Victoria Parklands in Adelaide to start the year and welcome Volvo back to the sport.

McLaughlin: We Can Win!

Wheels in Motion for #55