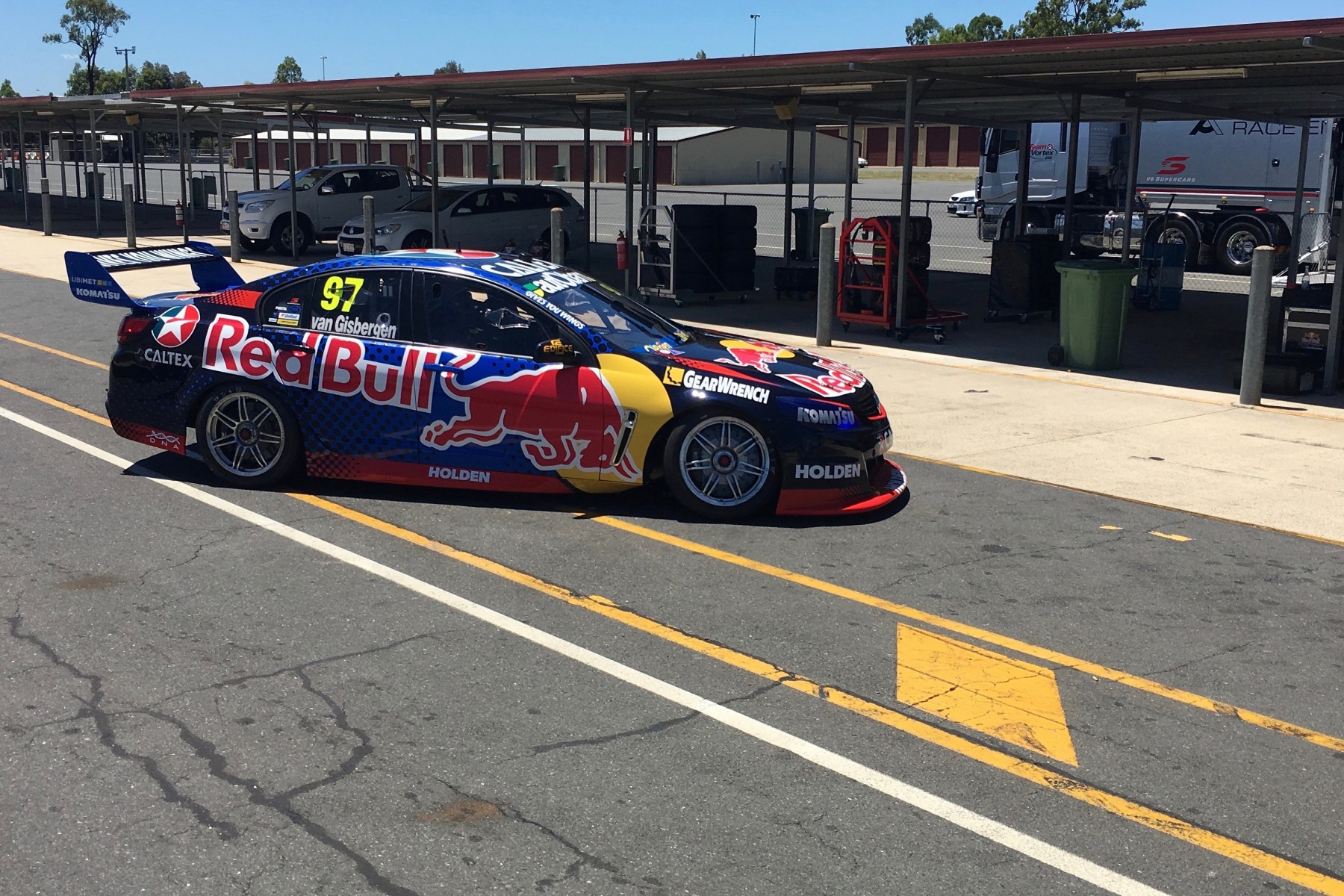 It was a welcome return to V8 Supercars for Shane van Gisbergen this morning, who completed his first laps in a Red Bull Racing Australia Commodore at Queensland Raceway.

The Triple Eight new recruit and recent Bathurst 12 Hour winner suited up for a 60km shakedown at his local test track this morning, with Jamie Whincup steering the TeamVortex Holden Commodore alongside, subbing for the injured Craig Lowndes in his new chassis.

Van Gisbergen has barely stopped driving over the off-season, having raced in the Dayton 24-Hour before the 12 Hour, but was pleased to kick off his Supercars season with his new group and get back in to the car he loves driving.

“It was good to get back into the V8 again – I’ve been driving a lot, but not V8s so it was good to drive a proper race car again! I really enjoyed it,” van Gisbergen told v8supercars.com.au this afternoon.

There were no issues with either new chassis, the aim of the day to ensure each car was running properly and ready for a full day out the gate on Thursday for the team’s official pre-season test.

The result was a relief for Triple Eight, which experienced a frustrating vibration with Whincup’s chassis when it debuted last year.

“Today was just a systems check, the car ran faultlessly which was great, the guys have put in some long hours to get it going so to have two new cars run faultlessly and shakedown perfectly is pretty awesome – so credit to the guys for getting that done so well,” van Gisbergen said.

“It [was about] just getting comfortable, so it felt nice, just getting the ergonomics good and Thursday we’ll really test and get a feel for the car.”

Van Gisbergen has spent plenty of time with the team at the Banyo workshop, but today was the first time working with his new crew at a race track.

“It was good to see all my guys who will be on the car out there at the track and see how they work, so it was really cool.

“We’ve got a full day on Thursday, so in the next couple of days we’ll get prepared for that. But pretty excited to get into some changes and see what the car can really do.”

Van Gisbergen is a previous winner at the Adelaide event and last year was involved in a spectacular exchange with James Courtney at the front of the field.

The 26-year old Kiwi emphasised just how important Thursday would be, with plenty on the checklist for the newly expanded three-car team.

“We’ve only got one test day before the start of the season, so the three of us will be running through some pretty big programs to get used to driving the V8s again and then prepare a good base package for Adelaide and the rest of the season,” he said.

Van Gisbergen finished second to fellow Holden driver Courtney last year, but this time has started his season in the best possible way, achieving one of his ultimate goals, winning a race at Mount Panorama.

Team boss Roland Dane labelled van Gisbergen’s efforts outstanding – and both have their eyes set on the Supercheap Auto Bathurst 1000 later this year.

“It’s something I’ve been working my whole life towards, winning a race at Bathurst, so to win the 12 Hour is pretty awesome and up there,” he said.

“So hopefully come October I’ve got a good opportunity to do it again – I’m looking forward to that.”

Back on the grid