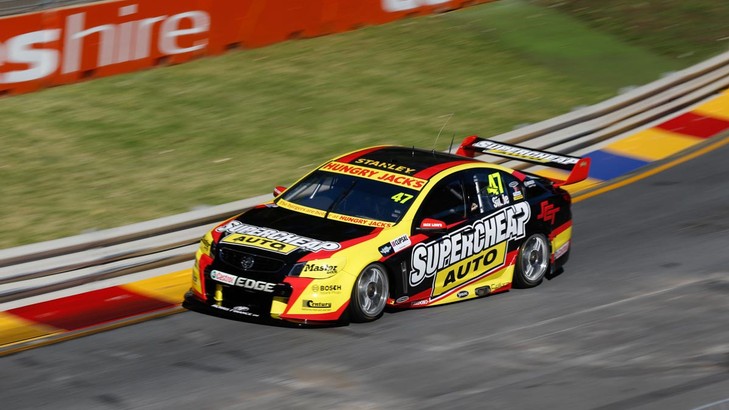 Tim Slade has gone quickest in the second practice session of the day, as the Supercheap Auto Racing team focused on its qualifying set-up.

The Clipsal 500 Adelaide has two back-to-back 15-minute qualifying sessions this afternoon at 3pm local time, with another practice run in the morning for teams to finalise race set-up.

“Today for us is all about qualifying,” Slade told v8supercars.com.au.

“It’s awesome to get out on track and everything seems to be fairly good so far.

“If we can be somewhere near there in qualifying we’ll be pretty happy.”

Slade was 10th in the first session, but confirmed the team ran old tyres then, and threw some “better stuff” on for the second.

He recalled 2012 as his best result at the Adelaide Parklands circuit, featuring in the top 10, but the South Australian is yet to stand on the podium in front of his home crowd.

The Volvos were at the back of the pack after Scott McLaughlin’s starring run in the first session.

Will Davison was the first Erebus AMG in 21st.

One practices session remains before qualifying this afternoon.

No Favouritism at HRT

Action Begins on the Streets of Adelaide

Thursday is Ladies Day at the Clipsal 500

Tim Slade  ›
15' Supercheap Auto Racing  ›
2014 Clipsal 500 Adelaide  ›
Stay In The Know
Sign up to the Repco Supercars Championship Newsletter
We use cookies to ensure we give you the best experience on our website. If you continue to use this site, you agree to the terms and conditions identified in our privacy policyOKPrivacy policy