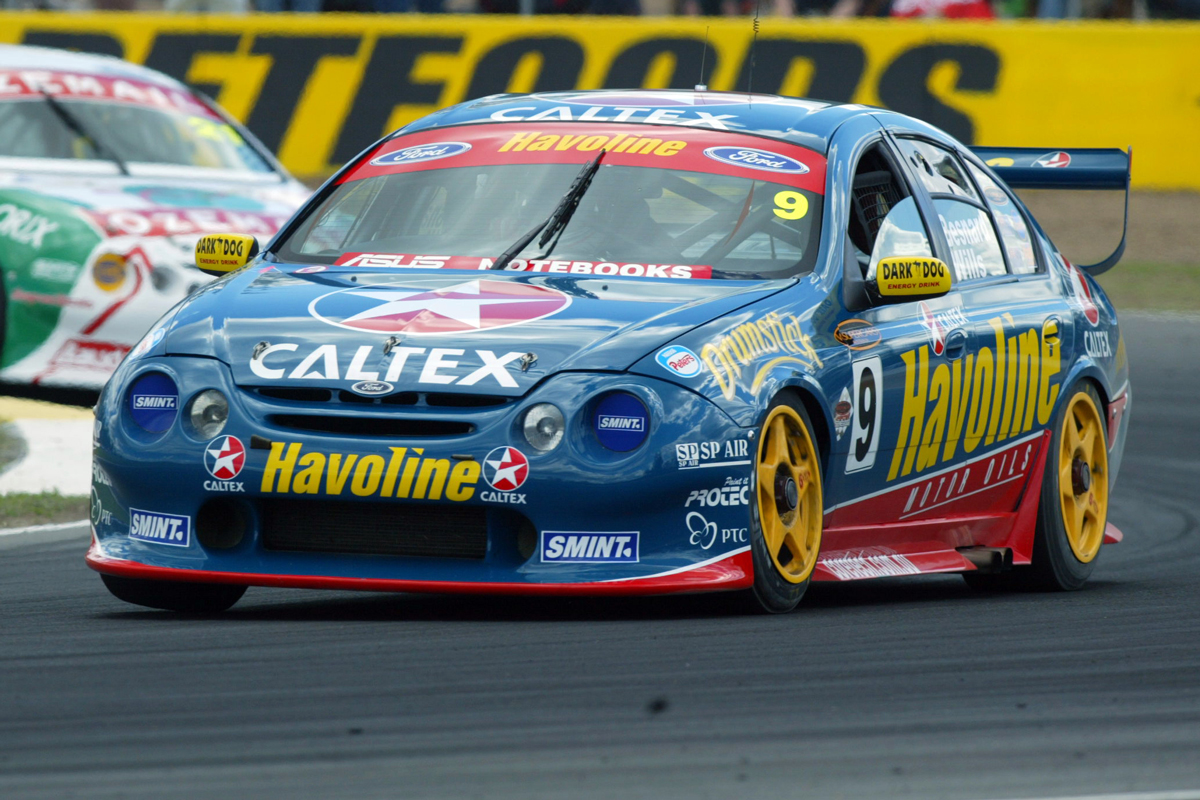 A champion in both Formula Holden open-wheelers and what is now Dunlop Super2, Kiwi Simon Wills enjoyed a career in Supercars spanning a range of teams.

The 41-year-old’s moment of Supercars glory remains victory in the 2002 Queensland 500 alongside David Besnard with Stone Brothers Racing; the win his first and, as it turned out, only across 65 rounds and 133 races.

Wills’ resume includes time with Gibson Motor Sport and John Faulkner Racing in the endurance events in the late 1990s that helped open the door to being crowned Konica Series champion in 2001.

Full-time opportunities in the main championship followed with Briggs Motorsport, Team Dynamik and a surprise call-up to replace the retiring Brad Jones in 2007.

He made his last appearance in a Supercar in a one-off start in an ex-Team Dynamik Commodore for Eggleston Motorsport in the Super2 Series round at Bathurst in 2008 and has since remained focus on family and business, though still retaining a connection to the sport. 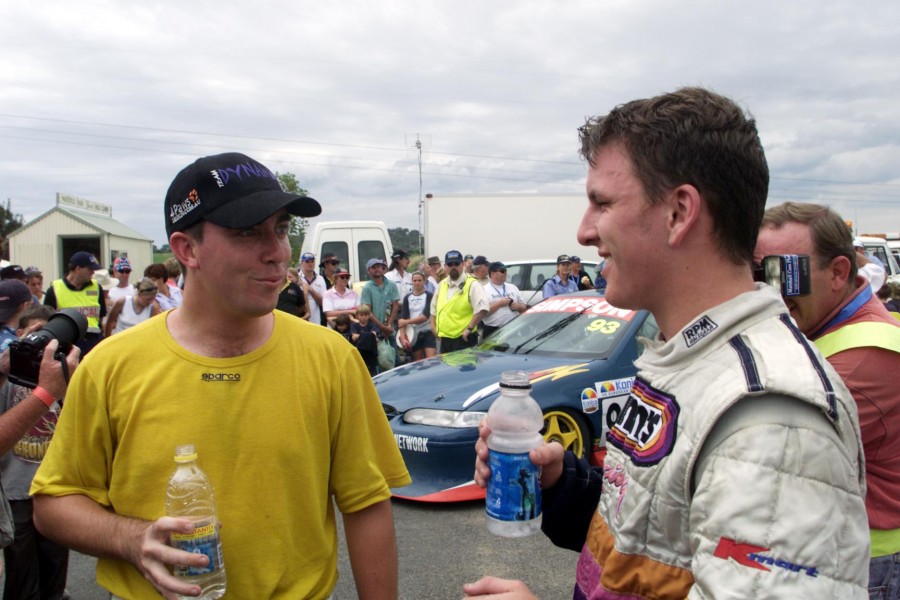 What are you doing now business wise and motor racing wise?

I’m still in Adelaide, where I’ve lived since the Team Dynamik days. I found myself a partner in crime - by that I mean my wife! - and settled down and got married and we have a son Harrison, who is seven and absolutely motor racing mad.

I’m working on the graphic design and sign industry now. I dabbled in it while I was driving at Team Dynamik and had a bit of time on my hands between races. I decided the sign writer was costing us too much money so I got myself a little cutter and away I went stickering the cars. Now it’s grown into the business employing five people.

I’ve been helping Adam Marjoram out with a bit of driver coaching. I helped him out in Utes a few years ago via Erebus and got to know him when I was helping Stephen White. So we became pals. I think he seemed to have stagnated so I have jumped back in this year and give him a bit of a hand, so that keeps my connection with the sport.

I work with my best mate Asher [Johnston], he races an Excel that we built together. We went to Bathurst at Easter and ran him up there against 55 cars. We have a lot of fun doing grass roots racing, back to what the sport was like when I first got into it.

Tell us how your first opportunity in a Supercar came to be with Gibson Motor Sport in the 1998 endurance races?

I had been doing Formula Holden and struggling until it all clicked together and I won a race in front of Scott Dixon at Mallala. The next thing I know I had a phone call from the team and I tested at Calder and away I went to share the car with David ‘Skippy’ Parsons.

We finished 10th at Sandown and then at Bathurst I had a really large crash. I broke my ribs, cracked my sternum and had a collapsed lung from when I hit the steering wheel. It wasn’t an ideal Bathurst debut.

There was a car blocking the track and I had just passed Alan Jones and was trying to hold him off. The next thing I know the track is blocked and bang!

The sad thing was they’d done a deal that morning to sell that car to an Englishman, but the crash pushed the diff through the fuel tank, so that car was toast and he bought the sister Wynn’s car instead. 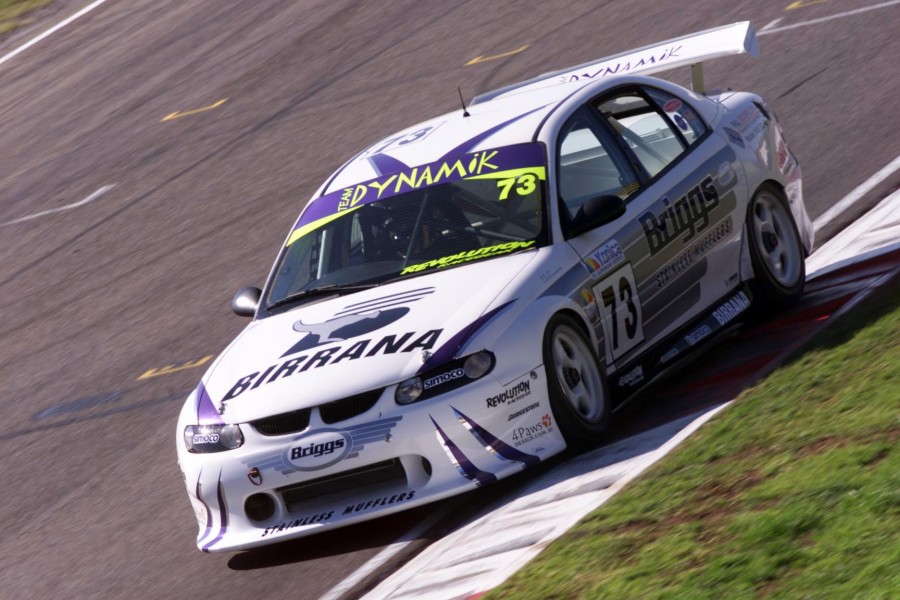 How much did winning the then-Konica Series in ’01 give your career a push along?

It helped me out a lot. We bought a car from Gibsons and originally had a deal to have some Level 1 team support from them but they ran their own program with Paul Dumbrell and Truckie Parsons so I ended up doing it with my old Formula Holden [Birrana Racing] blokes with no sedan experience.

We really didn’t have anything at our disposal but we decided to give it a crack; it was quite rewarding beating GMS and also GRM [Garry Rogers Motorsport, running Leanne Ferrier] and the other guys out there. 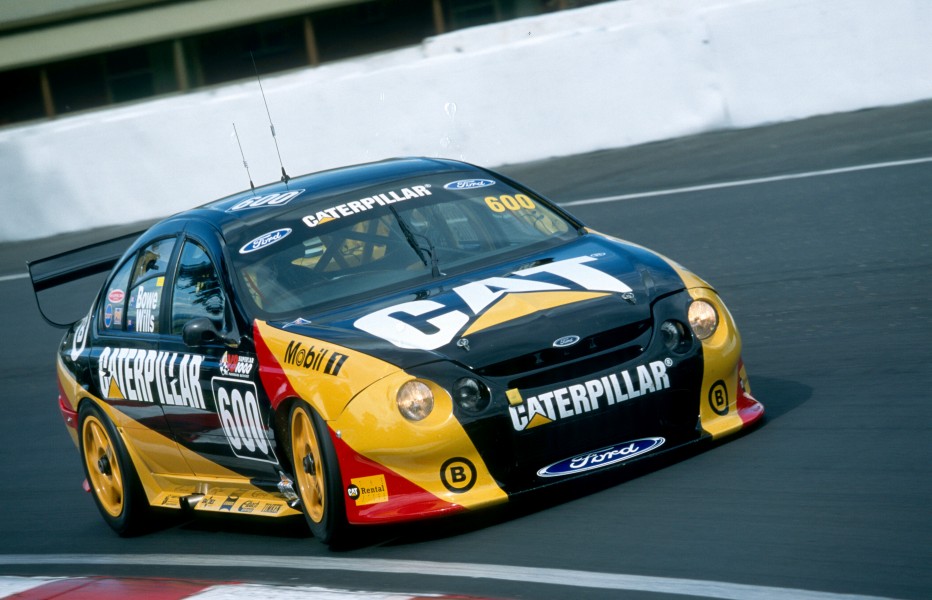 You got your main game chance with Briggs Motorsport in late ’01 but it was all over less than 12 months later. What happened there?

I had jumped in with John Bowe for the endurance races and the car was a rocket at Bathurst. Something happened with he and John Briggs in the aftermath and they parted company so I was left with the drive for the rest of the year.

In 2002 there was a fair bit of internal politics with Betta Electrical, Tony Longhurst and Max Wilson and there was an agenda running with those two cars the preferred option. I don’t think CAT was looking at staying in the sport so the guys on my car were left to their own devices that year.

A few of the people high up the hierarchy started pinning the poor results on me, they told CAT I was the problem, so I got up and left. If they thought I was the problem I said that they could see if they could find out someone that could do any better... 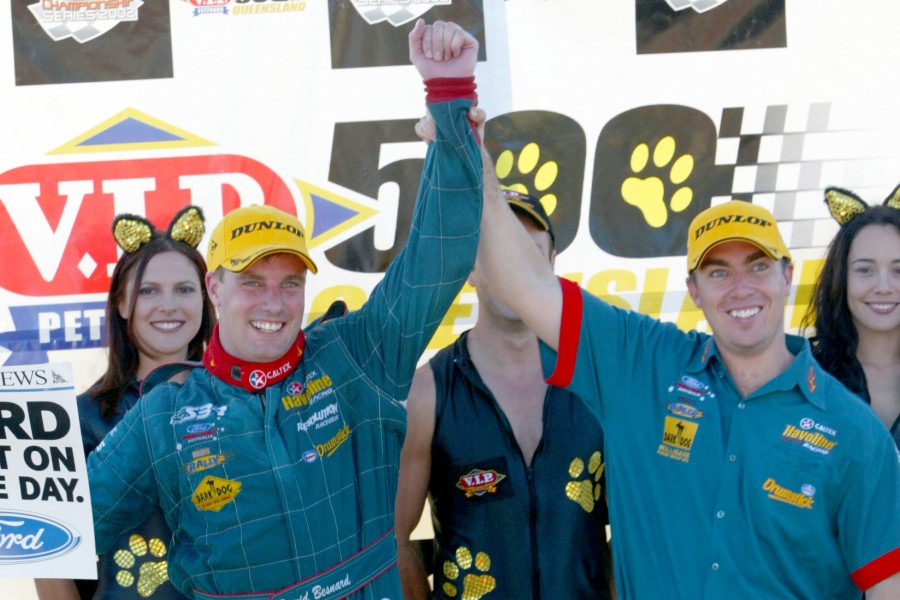 So the win at Queensland Raceway with Besnard and Stone Brothers Racing not long after would have been very satisfying?

It was very satisfying. I jumped in and led my whole stint and once we won the race it was quite neat to see the Briggs guys that I got along with well come out and clap on the wall for me.

It was a one-off driver because Wayne Gardner wasn’t available and could only do Bathurst.

I think everyone thought Marcos [Ambrose] would be the one that year to break the Holden winning streak [Commodore drivers had won the first eight rounds in a row that year] but we were pretty happy it was the green [Caltex Havoline] team and not the blue [Pirtek] one! 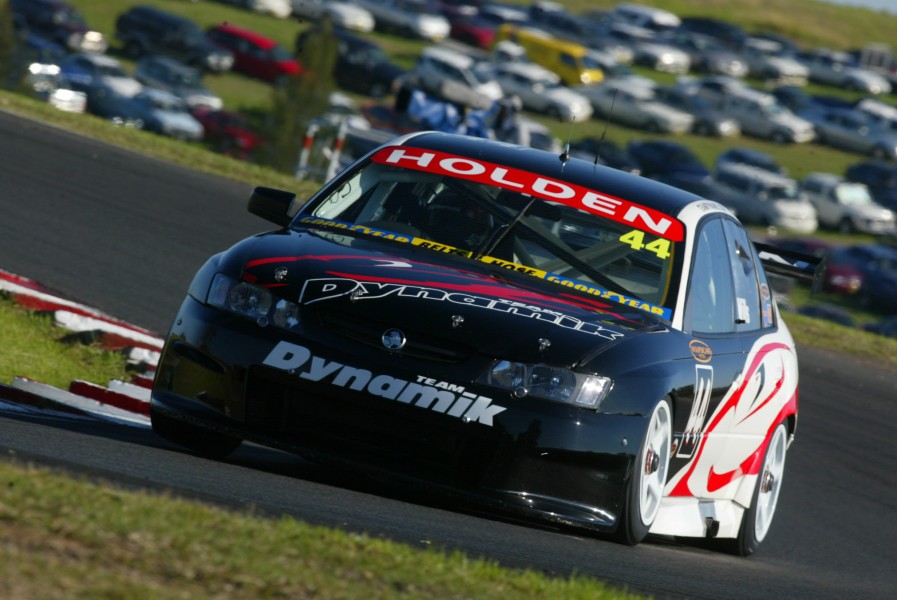 You spent three years with Team Dynamik and came very close to winning the 2003 Sandown 500 with the late Jason Richards. But the thing that stands out from that era to many is the infamous Woomera scandal in 2004 where one of the team cars was run at the airfield and deemed to have broken the category’s testing rules. What do you remember about that?

I didn’t have much to do with it. I was with sponsors going to the Mallala Konica Series round and I got a phone call saying I needed to come and drive the car. I didn’t know what was going on and I got to Woomera and jumped in and did a quick blast up and down the runway.

I was never told what the story was. There were a whole bunch of people there I didn’t know. People said we got gains from it but the car only ran for a few runs backwards and forwards. I don’t know what they were doing; I think they were preparing for something. The car was a funny colour, I don’t know though. I was young and naïve.

I was assured the chassis was not a V8 Supercar, hadn’t been registered as one and so forth, I just went with what I was told to do. There was a bunch of people there I didn’t know. We pulled up stumps, called it a day and came back the next day and a Supercars official was there.

He confiscated the MoTec ECU so we stopped running. Penalties were handed out that were pretty substantial, there was some negotiating behind the scenes and we were given a bunch of penalties, but I feel it was lessened. I was looking at starting from pitlane and a lap down for three rounds but I only did it for the first two races in Adelaide.

It was at the time when there was a lot going on technically. Cars were being found with extra wires, there were wiring loom issues and all sorts. Enough was enough and we were found as being the final straw in among a whole bunch of things. 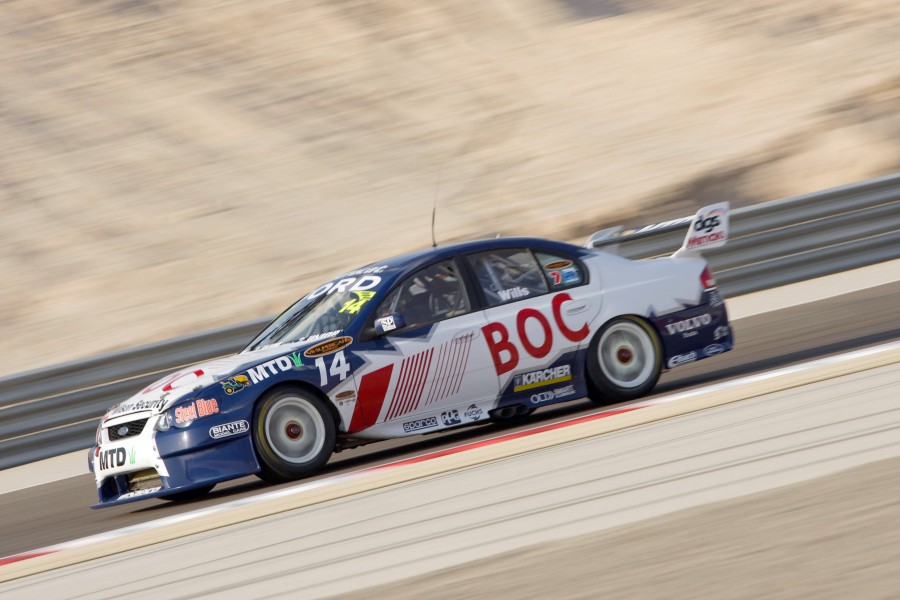 You sat on the sidelines in 2006 but got a call up to replace the retiring Brad Jones in early ’07 - was that a surprise?

That final year of 2005 with Team Dynamik I was more running the sign shop at that point; my interest in the sport had been affected by the politics. I couldn’t be bothered with it. Once the year finished and the saga had happened with franchises and court battles, I’d had enough.

Brad rang me up in early ’07 and said he was retiring and they wanted a fresh set of eyes to come and test their cars. David Besnard and I went and had a run, I was just happy to help out. The next thing you know I had a deal for the rest of the year.

I told them I didn’t want anything out of it, just for them to give me a fair go. At the time it wasn’t about anything other than helping them out. I was busy working with the business and was overweight but I felt good about it. They were a great bunch of guys and it was a nice and easy finish to my Supercar career.

The Debrief: A flying Ford, factory ZBs at sea

Supercars trio named for Dare to be Different