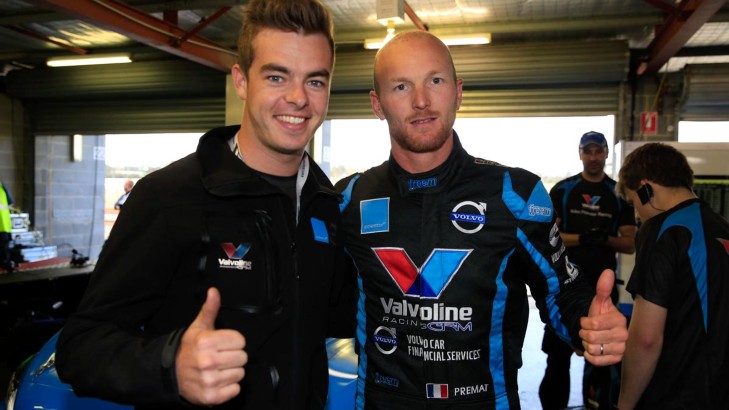 Popular Frenchman Alex Premat will join Scott McLaughlin and Volvo Polestar Racing for another crack at the Pirtek Enduro Cup in 2015.

However, the decision on who will share with David Wall in the #34 Wilson Security-backed S60 is yet to be made, with current incumbent Greg Ritter one of a number of potential starters.

Premat, 32, drove full-time for the Garry Rogers Motorsport team in 2012-13 in a privateer VF Holden Commodores. He earned a reputation as fast but crash-prone and was replaced for the 2014 transition to a factory Volvo squad by Swedish Polestar favourite Robert Dahlgren.

Premat, who was a factory Audi sports car and DTM racer before his stint in Australia, drove GT cars in 2014.

McLaughlin and Premat's 2014 Pirtek Enduro Cup was highlighted by a second-place finish in the second race at the Castrol EDGE Gold Coast 600.

But they were also in contention in the Supercheap Auto Bathurst 1000 until McLaughlin clashed with fellow Kiwi Shane van Gisbergen's Tekno Commodore and bounced into the concrete at The Cutting.

At the Wilson Security Sandown 500 the duo also lost a strong shot at a podium when Premat was blocked in by queuing cars during a pit stop. Memorably, commentator Mark Skaife urged Premat to push the other car out of the way so he could get back into the action.

Premat's performance will be crucial if McLaughlin is to step up from the fifth he earned in the driver's championship in 2014, and fight for the title this year.

"I have a done deal with Premat, he is in with Scott and that won't change," confirmed Wilson Security Racing GRM team owner Garry Rogers.

"When he was first here he crashed and burned and wrecked and whatever, but the fact was he was always very fast.

"The boys were always fixing his car but they never sooked about it because they knew he was quick enough and when they are quick enough people respond."

On the situation with #34, Rogers said: "We are still looking at what our options are.

"Greg (Ritter) is one of the options. Several people are options.

So far publicly confirmed for 2015 are:

- Steven Richards also to continue in a Red Bull Commodore with Craig Lowndes.

A handful of co-drivers hopped back in their 2014 cars at the pre-season test -Jonathon Webb in the TEKNO Autosports Commodore, Alex Davison in the Erebus Mercedes, and Taz Douglas and Dean Fiore in the Nissan Altimas -though they are not officially confirmed for 2015.

Macauley Jones spent some time in Dale Wood's BJR Commodore, but team boss Brad Jones told v8supercars.com.au it was not yet decided whether his son would contest the Pirtek Enduro Cup.

Battle of the rattle guns