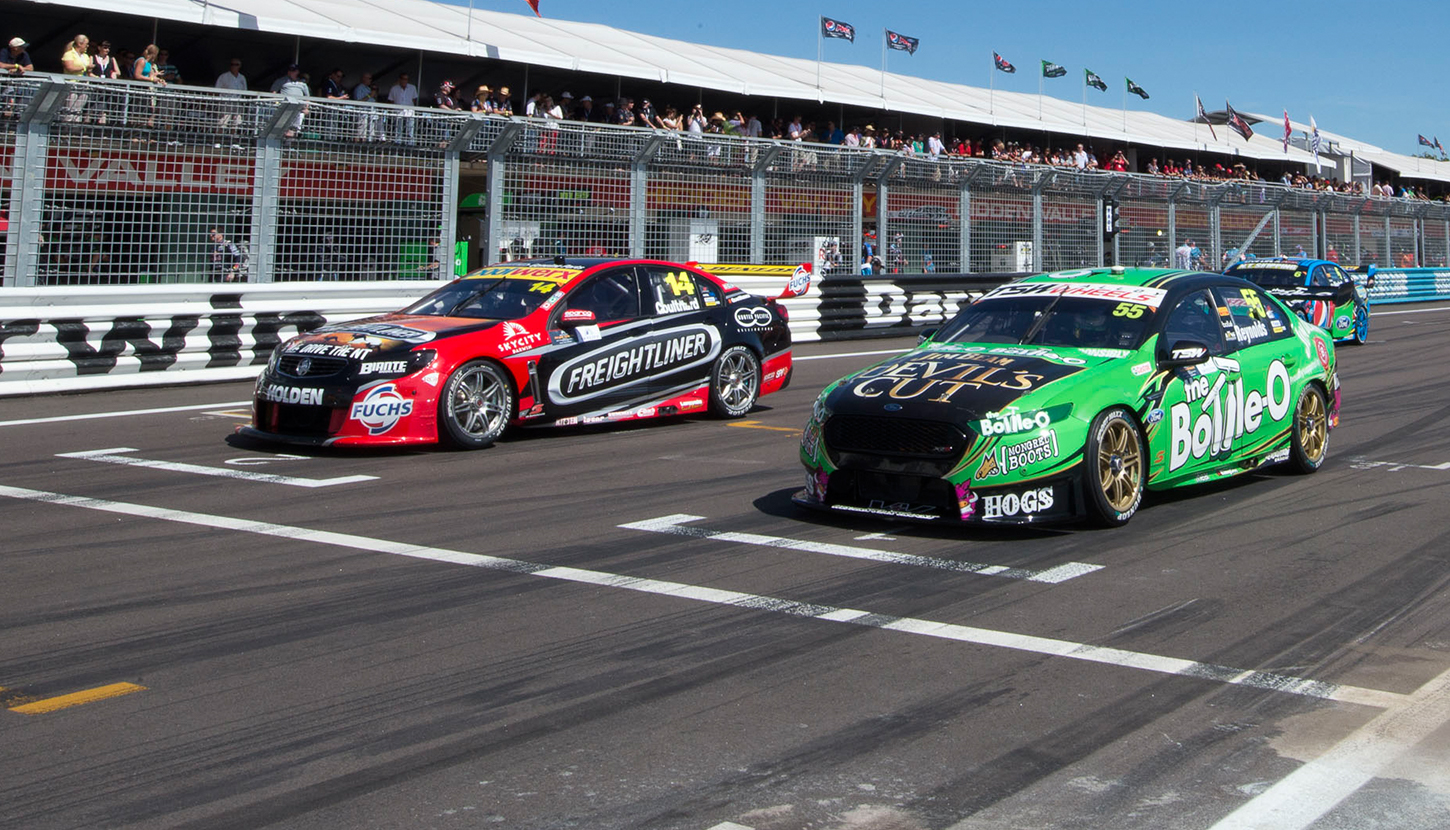 Shortcuts such as the one David Reynolds performed on his way to winning last year at Hidden Valley will be penalised at this weekend’s CrownBet Darwin Triple Crown.

Reynolds was leading the Sunday 200km mini-marathon in 2015 when he was baulked on lap 46 of the 70 lap race while attempting to lap Michael Caruso’s Nissan Altima at turn five.

Reynolds, then at the wheel of The Bottle-O Ford Falcon FG X, drove off the track at turn five and rejoined at turn seven behind Caruso, missing the run to and from the turn six hairpin.

Reynolds completed the lap about four seconds off the pace to ensure he didn’t stretch his advantage over his pursuers Chaz Mostert and Fabian Coulthard and went on to claim the win.

But Virgin Australia Supercars Championship driving standards officer Jason Bargwanna has made it clear that shortcutting in the same way will not go unpenalised in 2016.

If the same situation is repeated this year Reynolds – who now drives the Penrite Holden Commodore VF for Erebus Motorsport – or any competitor who shortcuts the course will be ordered to the back of the lead lap.

“What we have done during 2016 is consciously look at each circuit and address where we could have a shortcutting problem,” Bargwanna told supercars.com.

“We have explained that in some detail to the drivers and emphasised to them we are going to be quite firm on the penalties.”

Bargwanna said drivers must imagine there is a virtual wall or sand trap in front of them when they run off and accept they have to return to the track as close as practicable to where they exited and cop the positions they lose.

He accepted there was a fair chance a penalty could be imposed at Hidden Valley this weekend considering how many offs there are at turn five.

The decision to not penalise Reynolds for shortcutting he circuit last year was not accepted easily by everyone, with third placed Fabian Coulthard expressing his disappointment at the time.

That was especially the case because the BJR Freightliner Commodore driver had dropped off the circuit at turn five dealing with traffic earlier in the race and in the process of rejoining given up positions to Reynolds and Chaz Mostert, who eventually finished second.

The Kiwi DJR Team Penske driver has welcomed the crackdown, even through his team-mate Scott Pye was the first victim of the tougher stance, copping a 40 second penalty when he ran off at Barbagallo Raceway on the last lap of the Saturday race.

“I redressed correctly as you should and unfortunately Dave didn’t,” Coulthard recalled of the 2015 incident. “We finished on the podium but it could have been so much better.

“But to Bargs’ credit I feel like we have stepped up discussions in drivers’ briefings right throughout this year and have certainly put out some guidelines in key areas that have certainly improved that side of the sport.

“So I feel like that is moving in the right direction in terms of shortcutting and the penalties that do apply when you do shortcut.”

Also in 2015 Jason Bright shortcut during a wet race at Sydney Motorsport Park while battling Shane van Gisbergen for third place in a wet race. Bright was spun by van Gisbergen and short-cut to rejoin in front of his fellow Commodore driver.

He successfully held the Kiwi off for third and post-race defended his shortcut citing the Reynolds ‘precedent’ from Hidden Valley. There was no penalty in that case either.

Bargwanna said the Reynolds and Bright incidents had been a strong motivators for addressing shortcutting for 2016.

“The policy we had in the past was if there was no advantage to be gained we would accept that, but I think it got to the point for us where we all agreed, from an officialing point of view, from Supercars’ point of view and the drivers’ that we needed to be a bit firmer.

“The thing is the safer we make circuits the easier it is to actually cut from one section to another without any damage or abuse,” Bargwanna said. “Of course we want to make the tracks as safe as possible but at the end of the day we have a racetrack we want to race on.”