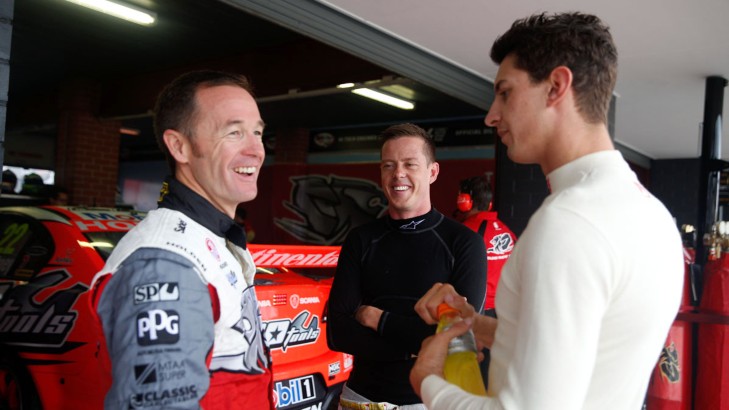 Shunted and punted during a "horrific" 2013 Pirtek Enduro Cup, Greg Murphy is confident of better results when he lines up in the 2014 endurance classics alongside James Courtney in the Holden Racing Team Commodore VF.

The Kiwi legend has been boosted by last week's Winton test session with Walkinshaw Racing, where he sampled the #22 Commodore V8 Supercar for the first time since the wet sydney.com pre-season test and found it greatly improved from the car he raced last year.

"They have made some really good gains in how driver-friendly the car is compared to what it was previously," the four-time Bathurst 1000 winner told v8supercars.com.au. "To feel how much more predictable and how consistent the car was to drive comparatively was really good.

"Last year when I first drove the car I said 'I hope they make this better before we go racing' and it was on the improve. But we certainly didn't get it where we wanted to.

"But at the Winton test last week I was excited every time I got in it because I felt so comfortable. You don't have to put that physical and mental effort into it as much as you did last year... That's a huge achievement and a huge improvement."

Challenged all day by a difficult car, the New Zealander crashed heavily in last year's Supercheap Auto Bathurst 1000. He took full responsibility for the wreck and admits to "beating myself up over it ever since".

Adding to his misery, he was tipped into the concrete at the Armor All Gold Coast 600 a few weeks later in the freshly rebuilt factory Commodore.

By contrast, running last on two separate occasions, going a lap down, having brake issues and finishing fifth in the 2013 Wilson Security Sandown 500 was a walk in the park!

"It was a horrific three races for lots of different reasons," Murphy said. "But we definitely feel we are in a better place moving forward."

As chronicled last week in our Winton test wrap, Walkinshaw Racing has now implemented 120 changes to its squadron of Commodores in the five months since Adrian Burgess commenced as managing director.

Those changes run the full gamut of hardware, software, setup and team structure.

"It's Formula One territory isn't it? And that's how hard these guys are being pushed," Murphy said. "You have got to think about the amount of resource that is required to do that. More money equals less time. It's a massive undertaking.

"The complexity of a V8 Supercar is far beyond what most people think it is," he added. "The size of some of these operations and what they are trying to achieve in very tight timeframes to find that minute little thing is incredible. It's massive, it really is massive.

"It never ends and the pressure just continues to grow."

Murphy said a combination of "many" changes had improved the handling, braking and engine power delivery of #22. He admitted he didn't know what all the changes were and nor did he think he needed to.

"It's not important I know everything that is going on because James and I have a very similar style in that car and the feedback is exactly the same from all the meetings we have had. Whatever he is doing, and all the work he is doing with (engineers) Al (McVean) and Rob (Starr) and the team and everyone else, is working for him and working for me. So there's a host of things going on and a lot of them are making good gains.

"You just have to look and see what James is doing," said Murphy. "He has been very consistent. He is very happy with the consistency of the car, because once he is up there he stays there.

Courtney won the 250km Race Three at the Clipsal 500 and followed up with a series of podiums. However, a puncture in Race 16 at the Perth 400 ended that run and dropped him to fifth in the Championship.

This is Murphy's second consecutive season out of the full-time V8 Supercars Championship and the first that co-driver testing has been cut back. But he is confident that he will be able to do his part.

"The miles we are not getting as co-drivers these days is certainly tough. But I know all these tracks, I know them well and I enjoy racing on them all."

Winterbottom: We just want to race!

Ingall stirs the pot ahead of live chat

Mostert makes his own way