Chaz Mostert has claimed a second win of the season in a chaotic Merlin Darwin Triple Crown opener.

Eighth-starting Mostert was one of the beneficiaries of the lap 1, Turn 1 chaos which wiped out pole-sitter Anton De Pasquale.

It marked the second win in Walkinshaw Andretti United colours for Mostert following his Race 8 win in Tasmania.

Starting third, van Gisbergen shadowed De Pasquale on the run to Turn 1, and forced the pole-sitter to defend.

In response to another move from van Gisbergen, De Pasquale left the door ajar, and the series leader made his move.

Hung out wide, De Pasquale was turned by fourth-starting Scott Pye, with the #11 Shell Ford hit by Mark Winterbottom.

The contact flung De Pasquale into the path of the pack, with Todd Hazelwood worst affected following heavy front to front contact.

The BP Ultimate Safety Car was deployed, with the race neutralised for six laps to aid the lengthy clean-up.

Jamie Whincup, who started sixth, had been forced wide to avoid the drama, and was 19th when the race restarted.

Pye was hit with a drive-through penalty for his role in the incident, only after he was forced into the lane for repairs.

Van Gisbergen began to stretch his legs in the lead, with Mostert keeping the pressure on Percat for second.

On lap 11, Mostert made his move, and set off after van Gisbergen. 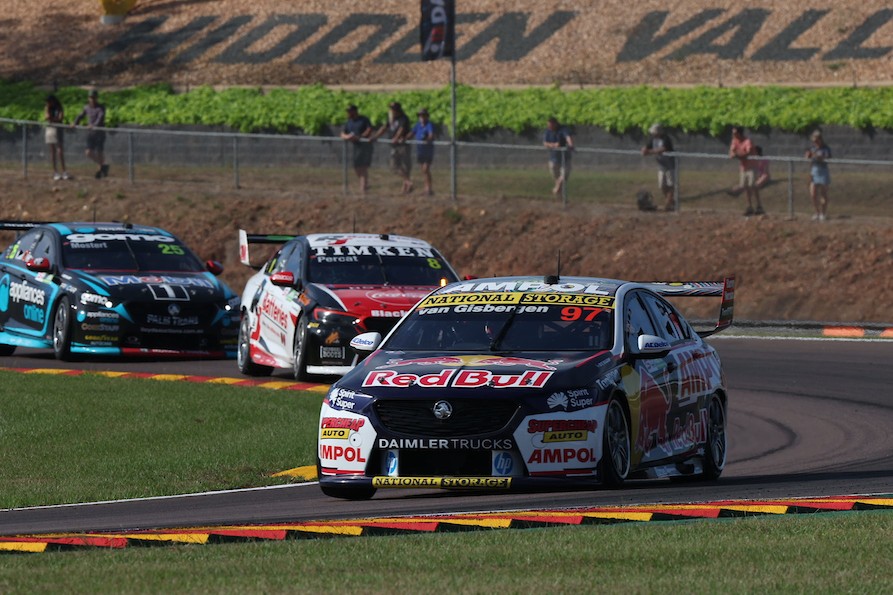 By lap 18, van Gisbergen’s lead over Mostert hovered around three seconds, before WAU dragged its man into the lane on lap 20.

Van Gisbergen enjoyed a healthy buffer by the time he stopped on lap 22, only for the left-rear tyre changer struggling to get the gun onto the nut.

What should have been a routine stop turned into a 30-second nightmare, with van Gisbergen rejoining the race at the back of the pack.

All the while, Mostert found a groove and eased away from Percat, who was under investigation over minimum tyre pressures.

Percat, having stopped first of the lead pack, fell into the clutches of Cameron Waters, who had started seventh alongside Mostert.

Waters made his move stick on Percat at Turn 5 on lap 31, but the margin to Mostert proved far too great.

The end margin between Mostert and Waters was 12.39s, with Percat nearly three seconds behind the Mostert Energy Mustang.

James Courtney crossed the line fourth, but only after lap 35 contact saw Brodie Kostecki tagged into a spin at Turn 5.

Kostecki himself was pinged with a five-second penalty for shortcutting the circuit infield, and crossed the line ninth.

Will Brown crossed the line fifth, having seen a pit-lane penalty for a breach of Safety Car restart procedure rescinded.

Kostecki brothers Jake and Kurt, the latter a WAU wildcard, finished sixth and seventh ahead of Tim Slade, with Thomas Randle 10th.

Van Gisbergen extended his series lead over Whincup to 193 points courtesy of his fastest lap, with Mostert closing to 195 points of the championship leader. 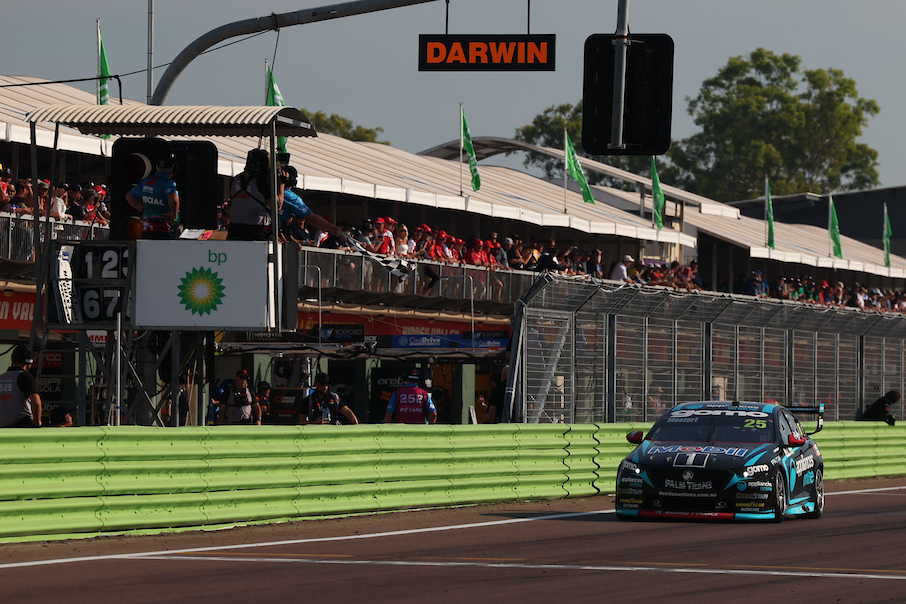 "Starting eighth, I was just hoping I'd get through Turn 1," said Mostert, who wiped 56 points off the deficit to van Gisbergen.

"I lucked into coming out of Turn 1 in third. I thought it was a good result, and hopefully the car was okay.

"I was pretty quick at the start... you get a bit worried that the degradation is going to come.

"We'll take 'em when you can get 'em, I've been on the other side plenty of times."

The field will return for ARMOR ALL Qualifying for Race 13 at 9:45am on Sunday.

'I don't know what to say': Winterbottom's 'cruel' moment