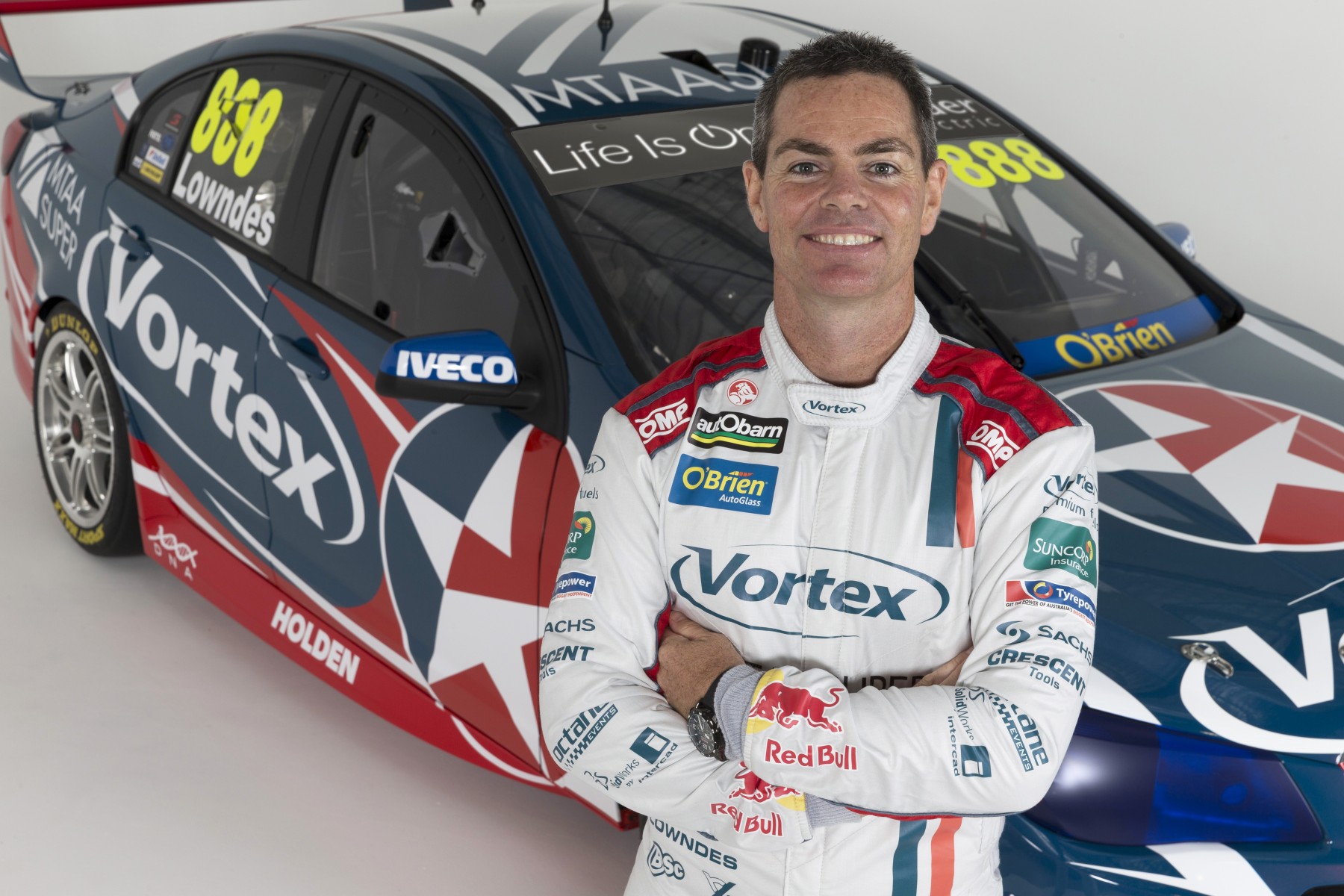 Craig Lowndes has admitted his broken collarbone has been a setback in his preparation for this year’s V8 Supercars Championship, but is confident he will be ready to go for the physically challenging Clipsal 500 next month.

Forced to withdraw from this weekend’s Liqui-Moly Bathurst 12 Hour, the fan favourite will have his first laps in his new TeamVortex Holden Commodore in a fortnight when the team runs a shakedown and subsequent test day ahead of season start.

The TeamVortex paint scheme was revealed today in Darling Harbour in Sydney, with Lowndes speaking for the first time since he broke his collarbone dirt bike riding over summer.

Team boss Roland Dane revealed Red Bull co-driver Paul Dumbrell would be on hand at the test day in case Lowndes was hampered by his injury but both Dane and Lowndes believe the #888 driver will be more than ready come the March 3 season start.

“I’m not too bad – to be honest I’m disappointed we miss out on Bathurst this year … I was excited to get back up there,” Lowndes said.

“It has been a bit of a setback to be honest – pre-season training has not been what we want it to be. But in saying that, we’ve still got four weeks to get right for Clipsal. I’m reasonably healthy, I’ve got no pain, so it’s good.”

Shakedowns are exclusively for brand new V8 Supercars and with only 60km permitted, the run at Queensland Raceway shouldn’t be a hard day for Lowndes. Testing, on the other hand, is crucial for teams ahead of the season with only three test days allocated per year.

“The test will probably also be a test for me too – so that will sort of take care of itself, I’ll get in the car and drive around,” Lowndes said.

“QR is not the most high loading circuit. It’s more focus on Clipsal, make sure we’re right – because we know the Clipsal street circuit is quite a demanding circuit on the body as well as the mind.

“So that’s more the focus at the moment, just getting ready for Clipsal.”

The team was looking at ways of improving Lowndes’ comfort in the car, as his belts and HANS (head and neck support) device could irritate his collarbone. He has undergone surgery since the accident to help speed up the recovery.

“We don’t have to hang off a motorbike like MotoGP rider, but definitely the seatbelts … the team have been very good, they’re looking at other ways we can maybe pad underneath the HANS device – not necessarily pressurise or put pressure on the collarbone.

“We have another meeting in a week’s time with the doctor to see the progression of the collarbone, we’ll put it under load and see where it’s at and what it’s like and then of course, the test day is the ultimate test for us.”

Lowndes’ Bathurst-winning co-driver Steven Richards is not available for the test at Queensland Raceway, but Dumbrell will be on hand to step into the #888 Commodore if required.

The team doesn’t have a back-up plan for Clipsal, confident the 2015 championship runner-up will be behind the wheel.

“We’ll make sure we don’t place anymore load on him literally and metaphorically in the next couple of weeks than we need to, or that he’s comfortable with, to be honest,” Dane said.

“We’ll have Paul Dumbrell available to help him if he wants to take it easy at any stage of testing leading up to Clipsal in our pre-season test, but we’ll play it by ear. As you see, he looks good at the moment.”

Dane joked to media he had gotten rid of Lowndes’ bike, though the 2015 Bathurst winner said this wouldn’t prevent him from riding in the future.

“At the end of the day, I still use dirt bikes for training, it is a great fitness regime,” Lowndes said.

“Every time I ride a dirt bike I’m always mindful of all the problems that occur if I have an accident. The accident I had was just a really a nothing accident, it was a nothing jump, but unfortunately just the way I landed was enough to impact the collarbone.

“If I hadn’t had that basically I’d walk away dust myself off and start riding again, but that’s just the way it goes.”

Lowndes suffered from a motorbike accident early in his career in 1996.

“I fell of a motorbike and earned myself a nice head knock,” he said.

“Bad habits – two wheels have never been a forte of mine.”