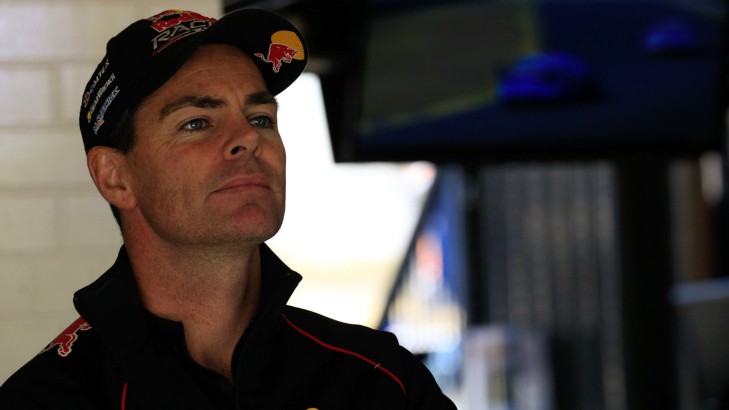 Craig Lowndes has accused Mark Winterbottom of making a "mountain out of a molehill" over their contact during last Sunday's 200km race at the Sydney Motorsport Park SuperSprint.

The Red Bull Holden Commodore VF driver has also described Winterbottom's tweet post-race about the incident, which happened in wet conditions at turn two, as "just stirring the pot".

The Pepsi Max Ford Falcon FG X driver tweeted "I'm assuming that wasn't on (sic) intentional? @craiglowndes888". He finished 16th in the race with bent steering while Lowndes went on to finish 10th.

Prodrive Racing Australia's has launched a protest over the incident after it was dismissed by driving standards observer Jason Bargwanna.

The factory Ford team's protest will be heard by stewards at the Wilson Security Sandown 500 in September.

But Lowndes said of Winterbottom: "He is just trying to make a mountain out of a molehill.

"It's obviously got a lot of interest because there have been a lot of retweets and other people getting involved in it all.

"I haven't spoken to him and he hasn't spoken to me but if he wants to go on with it on social media that is his call.

"No it wasn't intentional. I don't go around hitting people off-track.

"We have all been there and sometimes you have to accept decisions that you don't like regardless of whether you think they are right or wrong.

If Lowndes is found guilty he will likely suffer some form of points penalty. PRA's $4000 protest fee is returned if the protest is upheld.

Lowndes is currently third in the championship chase, 255 points behind Winterbottom and 81 points behind his Pepsi Max team-mate Chaz Mostert. Another PRA driver David Reynolds, in the Bottle-O Falcon FG X is fourth on the title chase 27 points behind Lowndes.

"Dave Reynolds is up there and there is no doubt those guys want to finish with a 1-2-3 (in the championship). I know at the end of the year that is what their plan will be," said Lowndes.

Rather than protest him, Lowndes also suggested Winterbottom should be concentrating more on his team Mostert, who narrowed the gap to his team-mate by more than 100 points in Sydney.

"There is all the hoo-hah about Frosty and I, but at the moment Frosty should be paying attention to Chaz.

"Chaz has come out earlier in the weekend and said he has the green light to race, which is great."

Lowndes said he remembered the incident with Winterbottom clearly. He also saw vision of it during Bargwanna's investigation.

"It all started in turn one. I passed (Andre) Heimgartner through turn one and there is contact in the back of my car which put me off rack into the dirt and as I wiggled back on the track Frosty got a good run on both of us.

"The vision I have seen is Frosty comes in front of us, brakes and I have tried to pull up and there is contact in the back and he has run wide. Bargs has said Heimgartner has hit Frosty again. Then we got going, we had the enquiry and the last thing I heard is it must have been ruled a racing incident because I hadn't heard anything more."