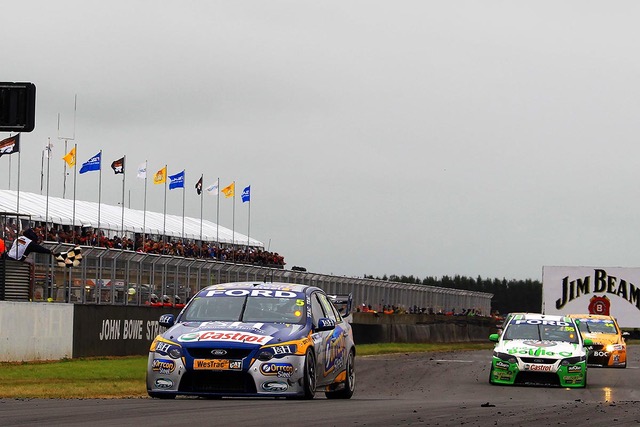 While he wouldn’t go on to win the championship in 2010, Mark Winterbottom signalled his title aspirations with a superb Symmons Plains victory.

To 2021, Winterbottom has only claimed one race win at the Launceston-based circuit, which will host the next round of the ongoing season next month.

However, of his 38 career race wins, Winterbottom’s Tasmania victory on the Sunday in 2010 is perhaps one of his most underrated successes.

James Courtney arrived at the Launceston venue clinging onto his championship lead from Jamie Whincup, with Winterbottom an outside chance.

After a torrid Bathurst 1000 campaign, where he finished ninth following an accident for co-driver Luke Youlden, Winterbottom had all but written off his title chances.

Craig Lowndes, who won the Phillip Island and Bathurst enduros, vaulted to victory on the Saturday, with Winterbottom fifth.

Whincup was sixth, cutting the gap to 41 points with Courtney 11th.

With the Triple Eight duo and Courtney the primary title hopefuls, Winterbottom needed one of his best performances to drag himself back into the discussion.

Come the Sunday, and he delivered, scoring a pole and win on a chaotic day, with the heavens opening.

Winterbottom’s march to a 14th race win began with a feisty first-lap stoush with Jason Bright, who led into Turn 1.

The Orrcon-backed #5 Falcon muscled down the inside at the penultimate corner, and the two drivers nearly came to grief.

From there, Winterbottom drove an assured race to clinch victory ahead of Ford Performance Racing stablemate Paul Dumbrell, who claimed a maiden podium.

Dumbrell would go on to win his first race at the next event at Sandown, which hosted the second round of the season last weekend. 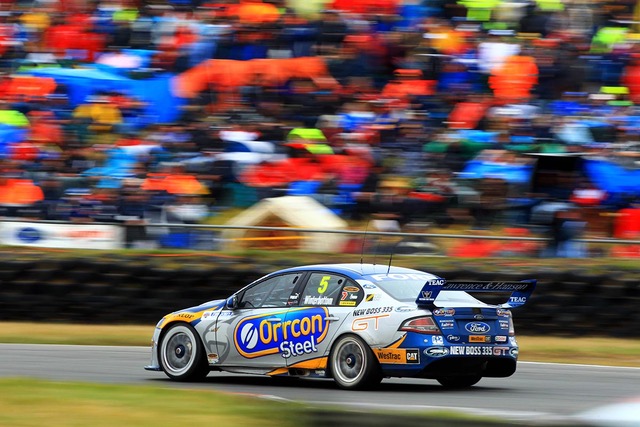 The #5 Falcon was the one to beat

Several drivers fell by the wayside in the 84-lap classic; Andrew Thompson was sent spinning into the wet grass rounding the Turn 5 sweeper, before Dean Fiore and Tony Ricciardello came to blows at the back of the circuit. Both incidents triggered the Safety Car.

Will Davison also struck drama on lap 32, with his Holden Racing Team Commodore hemorrhaging oil and causing many in the trailing pack to slip up.

With a championship at stake, title hopefuls look fondly on the races they win when their closest rivals falter.

For Winterbottom, he stood taller than ever on a day all three of his championship rivals hit trouble.

Courtney was penalised for contact with Lee Holdsworth, and was consigned to a second finish outside the top 10 in as many days.

Whincup loomed to clinch a top five finish, only to be forced in for a late fuel stop. The reigning champion finished 15th, and on a day he was meant to close the deficit widened to 50 points to Courtney.

Lowndes, though, suffered the most of the quartet, after challenging for the lead early on, the #888 Commodore slumped to the rear with a gearbox issue. He would fail to finish the race, and the deficit to Courtney blew out to 257 points. 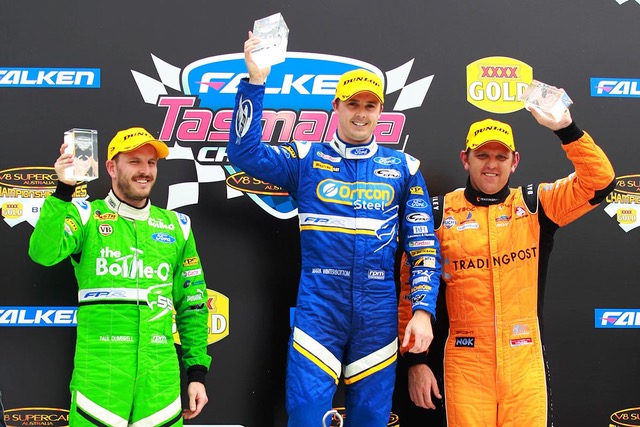 "That was a very satisfying and hard-fought win today,” Winterbottom said.

"The car was very good in the wet, so I blazed early. However, when it dried I had a bit of understeer and it turned into a hard-fought win.

"Both Jason Bright and then Paul Dumbrell really did push me all the way today, plus we went to the dry tyres maybe a lap or two early because of the Safety Car.

“Then the drizzle was still about and a HRT car dumped oil, so we had plenty going on.

"Although the car had a lot of understeer going into the hairpin especially, it actually gave me good exit speed and that was important in holding the others off down the long straight.”

Winterbottom, now with Team 18, will return to Symmons Plains for the Beaurepaires Tasmania SuperSprint across April 10-11. Tickets are on sale now.

On this day: The 'awkward' teammate controversy

Behind the scenes of Tickford's 2020 journey

Quiz: Test your knowledge of the Penrite Oil Sandown SuperSprint

On this day: An all-time great winning journey begins