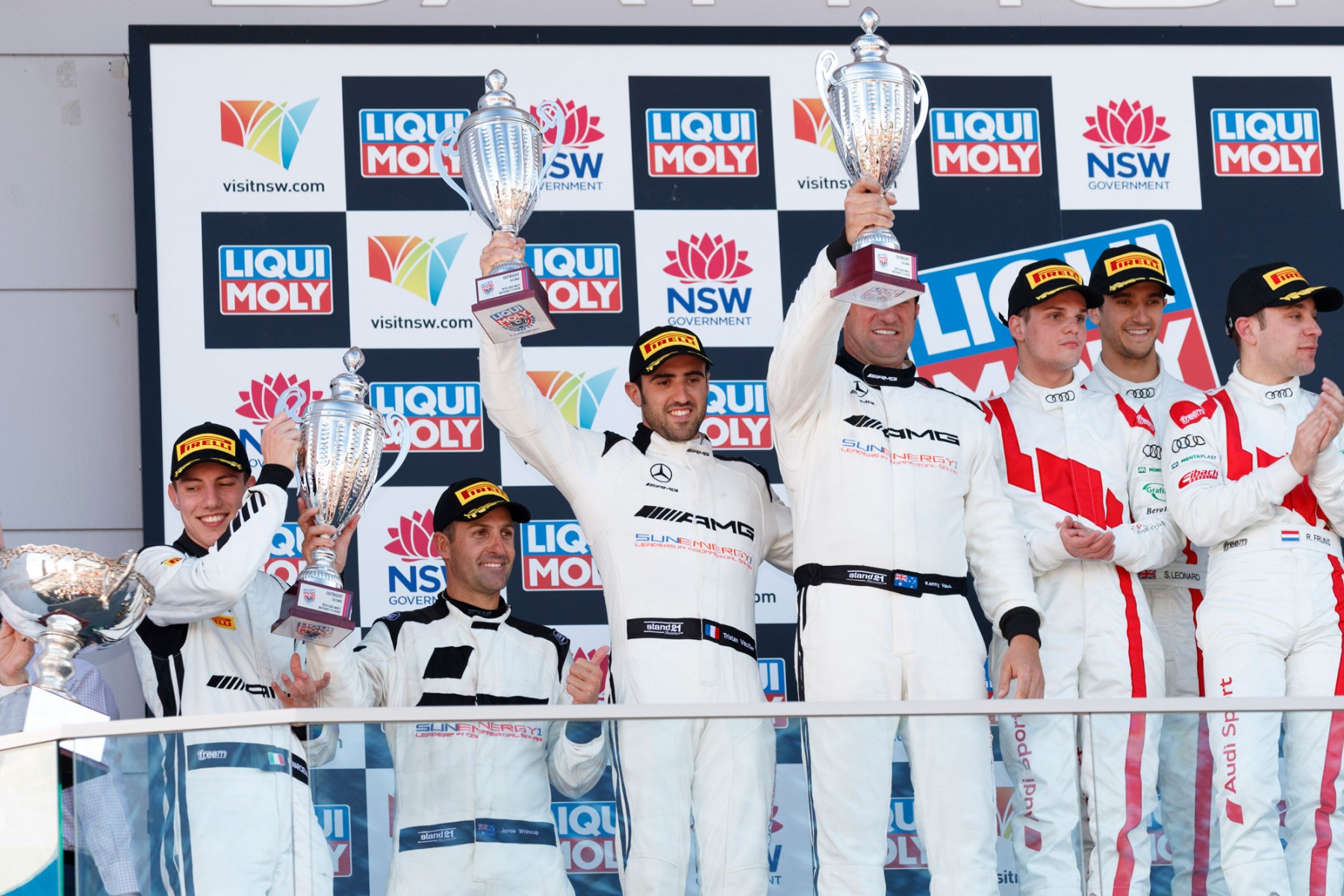 Racing a Mercedes, Whincup led the contingent of 11 Supercars drivers and finished second to the factory WRT effort of Robin Frijns, Stuart Leonard and Dries Vanthoor.

The earlier challenges of Chaz Mostert and Garth Tander for BMW and Audi respectively ended with damage, both entries having led parts of the race.

The race effectively ended with a multi-car accident on the run to McPhillamy Park with 20 minutes remaining.

Ash Walsh got caught up with Bryce Fullwood’s MARC Focus, with his Audi left strewn across the circuit and then collected by John Martin in the Mercedes he shared with David Reynolds.

All three drivers got out of their vehicles - Walsh taken to Orange Hospital for further checks - with a brief safety car period followed by a race suspension and ultimately declaration with four minutes to go.

When the race was neutralised, Whincup had been closing on Frijns, as the top four cars all looked to save fuel to make it home without stopping.

Frijns' lead had hovered around four seconds in the final hour, and was chipped away at by Whincup down to three and then two.

It means Audi won the race for the third time and first since 2012, while Whincup had to settle for second to go with the victory he claimed in a Ferrari 12 months ago.

The Scott Taylor Motorsport-run Mercedes only started the day in 15th, and Whincup then jumped in the car for the first time after owner Kenny Habul's stint in the fourth hour in 16th place.

He carved his way up to second during his stint, then hopped back in for the run home, after Vautier and Marciello stayed at the sharp end of the order.

"We couldn’t be happier," Whincup said. "We certainly maximised.

"I’m a big believer of the team that does the best job should win. These boys (WRT) did a fantastic job, so they deserve to win.

"We were tight on fuel as well, but what’s Bathurst without a fuel race, we were hanging in there. We got lucky.

"Thanks to Kenny and the guys from STM, what a great weekend."

Porsches filled the next four places, led by the #540 of Marc Lieb, Jeroen Bleekemolen, Luca Stolz and Tim Pappas that won the Pro-Am class

Earlier in the day, Mostert and Tander's entries looked set to challenge for significant silverware.

Mostert led the first quarter in the Schnitzer Motorsport BMW he qualified on pole.

After getting as much as 40 seconds clear during Mostert’s commanding opening stint, the car lost track position with a drive-through penalty incurred at a restart by Marco Wittmann.

Higher ambient temperatures also hurt its straightline speed, but Mostert had cut his way from 10th through to fifth across the ninth and 10th hours.

Its efforts ended when Mostert got tangled up with the #17 Bentley and #991 Porsche that he was trying to pass, and a lapped Porsche at Forrest’s Elbow with just over two-and-a-half hours left.

“I'm 100 percent gutted to have crashed the car when we were in such a good position,” Mostert said.

“It's one of those things that's hard to take. We had a fast car all weekend. I thought if I could clear a couple of cars I'd be on my way, but it didn't work.

“I took a risky option, I tried to take advantage of some lapped cars, and there just wasn't enough room for three cars.

“It was an aggressive approach, and it didn't stick.”

The Audi featuring Tander had been second for a big chunk of the race, including at the halfway mark, but its challenge came to an end approaching the eight-hour mark.

Kelvin van der Linde was running right with team-mate Markus Winkelhock, but tried to go around the outside of a MARC car exiting the Esses, drifted wide and tagged the wall.

The South African limped the car back to pitlane, but what he admitted was 'Bathurst inexperience' required repairs that cost the car 29 laps, and meant it finished 30th.

“We were looking really strong, the car was flawless the whole day, van der Linde said.

“Through Skyline there was some traffic ahead, I went offline to try to overtake him and there was no grip.

Winkelhok’s Audi later crawled to a halt at the Cutting with a left-rear driveshaft failure while leading Frijns with 100 minutes to go.

Waters led during the sixth and seventh hours and then David Fumanelli in the 10th, with Lewis Williamson bringing it home.

The entry lost two laps early through radio communication issues during Watson’s first stint, which they were ultimately unable to recover from.

It did, though, fare better than the Pro entry of Shane van Gisbergen, Craig Lowndes and Come Ledogar, which succumbed to overheating issues approaching the halfway point of the race.

The Objective McLaren of Tim Slade, Warren Luff, Jaxon Evans and Tony Walls started the day 24th, but raced well and even led in the morning.

It essentially remained in the top 10 thereafter, with Luff running on the lead lap and in seventh before a failed starter motor accounted for the car at a pitstop with 40 minutes to go.

Class I was won by the Mustang-bodied MARC II led by Dunlop Super2 Series driver Will Brown, in 18th in the overall order.

Before Martin’s crash, the AMG GT3 he shared with Reynolds, car owner Mark Griffith and Liam Talbot had been relatively quiet, running in 15th place.

Rebuilt overnight after a qualifying crash, Lee Holdsworth’s Audi was one of the first out of the race, Mark Cini fed into the wall at Reid Park as he slowed for an accident ahead on lap 42.

Mostert crashes out of 12 Hour contention