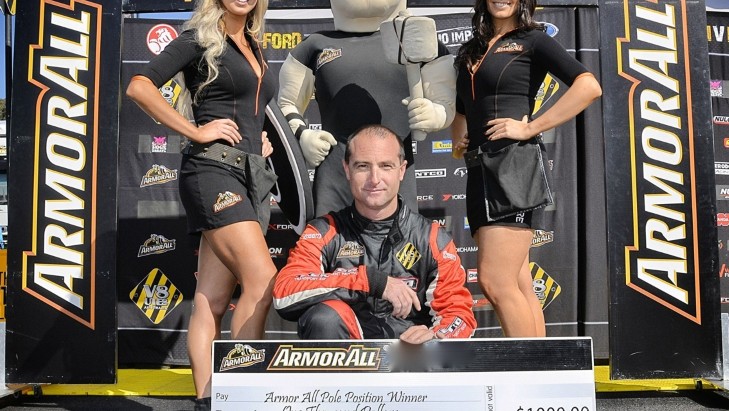 Walton broke the lap record early in the session in a time of 1:21.3626 and is ecstatic to add another win to his memoir and increase his Series lead.

The top 15 drivers all broke the record and were only within 0.8second of Walton.

Ryal Harris came in second fastest, but not before he was caught up in a red flag incident with Rookie Scott Nicholas.

Harris locked up coming into turn 9 at Dandenong Road, tapping Nicholas' Carpentaria Fuels Holden and spearing them both off into the sand-trap.

Harris managed to recover his All Purpose Pest Control Ford and put his fastest time in, in the last minutes of the session.

"Yeah coming on to Dandenog, I was about 5 lengths behind Scott Nicholas and I thought it would have been fine, but he slowed right up into Dandenong and I had no-where to go, and had to lock the tyres up and unfortunately hit the rear of him. For us to do the quickest time on the 9th lap show's we've got a good car, it's just a shame I couldn't put it together at the start of the session," said Harris.

Stratco Racing's Rhys McNally was third fastest ahead of Multispares Ryan Hansford in 4th Nathan Pretty in 5th and Jesse Dixon in 6th.

Sieders, now losing valuable championship points, was disappointed with his result - usually posting in the top 3.

"We missed out on early laps with traffic and it really cost us in the end, once the tyres were gone, we couldn't pick up any more time than we did, P9 is a little unusual, but hey, it's Ute Racing, people have won rounds from back there," said Sieders.

Wakeup Racing's George Miedecke claimed 10th fastest ahead of Adam Marjoram, Kim "The Assassin" Jane, Macmahon Mining's Gerard McLeod, Elliot Barbour and Rookie Phillip Woodbury who rounded out the top 15 and was the last driver to go under the record.

He finished the session in the tyre barrier at Turn 4 after he hit a tyre bundle.