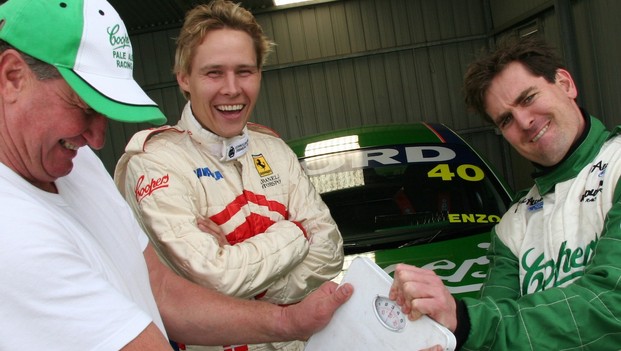 All 32 cars from the 2013 Auto One V8 Ute Racing Series – protected by ARMOR ALL – will display a tribute sticker in memory of former V8 Ute driver Allan Simonsen, who passed away at last weekend’s Le Mans 24 Hour Race.  The tribute will take place during the next V8 Ute Series Round at the Sucrogen Townsville 400, from July 5-7.

MacAlister was also the team owner and has many fond memories of the 34 year old.

“He was an excellent driver, he’s a great guy and we developed a great relationship, I’ve stayed in touch and followed his career with great enthusiasm. I was very sad to hear the news.

“Glenn Cooper (Chairman of Coopers Brewery) seconded him over to us (2005) and it was quite a challenge some times,” he said with a grin. “He gave everything 110 percent, was fast and furious, he came in the full Danish-man, and we sent him away half an Aussie bloke. We always had a lot of fun!”

Elsegood was saddened by the news and also remembers some great times with his former teammate.

“He bought some really good fun to the team, a lot of professionalism as well," Elsegood said. "You could say he had a fair amount to do with the development of the Ute, he was quite clever and experienced knowing what worked and what didn’t. He was always super quick and at that stage in my career he helped to develop my driving. He also introduced me to a European Race team in 2006, and we raced against each other that year at Spa.

“We stayed in touch over the years, I used to see him every year, talk over Facebook, the occasional beer after an event when he was out here, I’ll definitely miss him."

Simonsen also raced alongside 2006 V8 Ute Champion Marcus Zukanovic (pictured below right with Simonsen, left) in a Shelby Mustang GT 500 in the 2010 Bathurst 12 Hour race. Zukanovic became great friends with the Dane over the years and was devastated to hear the news.

“I met him in the Utes and after two or three years battling against each other, we became really good mates, and is why we raced together in the Mustang in the 2010 12 hour. We spent some great times together. It’s an absolute tragedy; I was devastated to hear the news. He was a great mate and a talented driver, he lived for the sport,” said Zukanovic.

Jon Hart, Simonsen’s PR Manager designed the stickers in his honour, the two met each other when Hart was the PR Manager for Coopers Racing and have been friends ever since. Hart unfortunately won’t be in Townsville, as he is flying to Denmark this week.

ENZED Drivers Championship Leader Ryal Harris will also honour Simonsen this weekend doning the Red and White colours of the Danish flag on a new race-suit, which he will then auction off at the end of the weekend for a charity of the Simonsen’s  family’s choice.

“I spoke to Jon (Hart) the day it happened and we thought this would be a great idea, we just wanted to do something. We (Simonsen and Harris) banged doors together for ages in the Utes and we’d always catch up for a drink when he’d come to the Gold Coast. He was a great guy and I’ll miss seeing him around,” said Harris.

The V8 Utes will kick off their Townsville campaign on Simonsen’s birthday, Friday July 5, with two practice sessions.

13/06/2013
Related Content
2013 Sucrogen Townsville 400  ›
Stay In The Know
Sign up to the Virgin Australia Supercars Championship Newsletter
We use cookies to ensure that we give you the best experience on our website. If you continue to use this site we will assume that you are happy with it.Ok