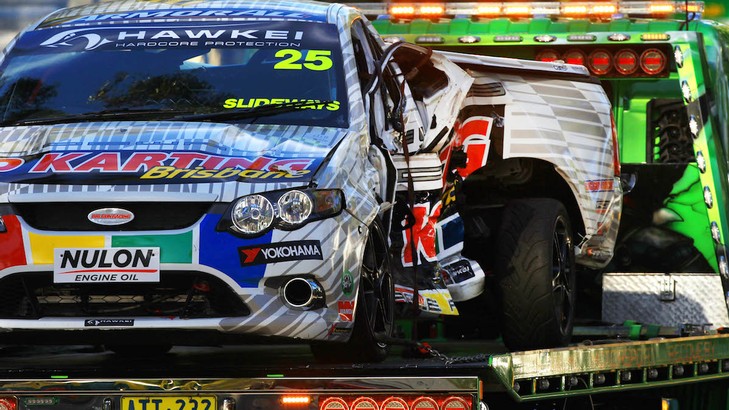 Cam Wilson, Jordan Skinner and Gerard McLeod have been racing the clock to rebuild their V8 Utes before the second round of the Australian V8 Ute Racing Series at the Perth 400, which begins May 16.

Wilson and Skinner had a coming together at the season opening Clipsal 500 and walked away with immense damage following a major incident in the final two minutes of the qualifying session. The rear-end of Skinner's car was a throw-away and team manager Wayne Williams has been hard at work to have it back on track in-time for Perth.

“The car was pretty bad after the incident but with the long break, it wasn’t as hard of a rebuild as we’ve had with some cars in the past. We just need to get the car tested now and it will be good to go for Perth,” said Williams.

Skinner was in doubt of returning to the series after the incident at Clipsal, but is looking forward to taking to the track again.

“We’ll be at Perth, our aim is to go out and see if we can do a little bit better and at least make it to the grid and try and get a full weekend out of it," he said. "Wayne did a great job getting the Ute back together and ready to go we just need to do a shakeup before we hit the track in Perth."

This is the second rebuild Wilson has had in six months, an innocent bystander in an incident on the Gold Coast last year. It seems luck isn’t on the Queensland Indoor Go Kart Centre owner’s side, with a major setback occurring in the rebuild when the roof of his brand new shell was damaged as the Ute was coming off the truck.

“It doesn’t look like we’ll make it to Perth at this rate – we’re completely behind the eight ball after it was damaged in transit," Wilson said.

"It will be a race against time to even get it ready for Darwin. I’m determined to make sure this new car is built as good as the last car, we’ve set a high standard for ourselves now, to have it come off the truck with a crushed roof was just devastating."

Big Gun Racing’s Team Manager Joe Devries is under immense pressure. With only a week remaining until his truck leaves for the western state, he still has three cars to rebuild including Wilson’s, Peter Burnitt (who had a major incident in the final race at the Clipsal 500) and reigning Champion Ryal Harris, who is also having a new car built.

“We basically have six working days until the truck leaves, Pete’s (Burnitt) should be done in the next day or so but Ryal’s is a bare chassis with seats in it. We haven’t even started Cam’s yet, it’s just been crazy, we will be working around the clock to get it all done,” explained Devries.

McLeod is rebuilding for other reasons – he is currently in the process of buying the Jake McNally Holden VE and thought it was time the car had a makeover.

“I had an opportunity in the off-season to rebuild the car to improve performances so we thought we’d take advantage of it. Essentially it’s a swap over, we’re simply giving it a new shell and moving all of the parts, engine etc, over into it. It was built six years ago so we thought it was time to give it a fresh look and feel,” said McLeod.

This will be McLeod’s third outing in a V8 Ute at Barbagallo Raceway and with some dramatic races there in the past, he’s hoping to walk away with a clean ute at the end of the weekend.

“We were having a really good run there last year before another competitor ended our run in the reverse grid race; it’s a big weekend for our home sponsor Macmahon Mining who will have a massive presence at the track. I’m hoping the new Ute will help my performance, it’s always better with a new car to race, it’s a fresher car and we’re confident to run in the top ten over the weekend,” said McLeod.

Two other drivers who are excited to hit the track are Kris Walton and Jeremy Gray who both competed in the New Zealand V8 Ute Series last weekend in Pukekohe. Gray had an interesting first time outing and finished just outside the top 10 for the weekend whilst Walton claimed his third New Zealand round in a row and continues to lead the series over there by over 100 points.

All drivers will take to the circuit for Round Two of the Australian V8 Ute Racing Series in Perth for two practice sessions, a qualifying session and three races.

The V8 Utes are just one of the many support categories on the line-up for the Perth 400, with the Dunlop Series, Aussie Racing Cars, Super GT, and Historic Touring Cars on the bill. Tickets are available for the event at Barbagallo Raceway now.