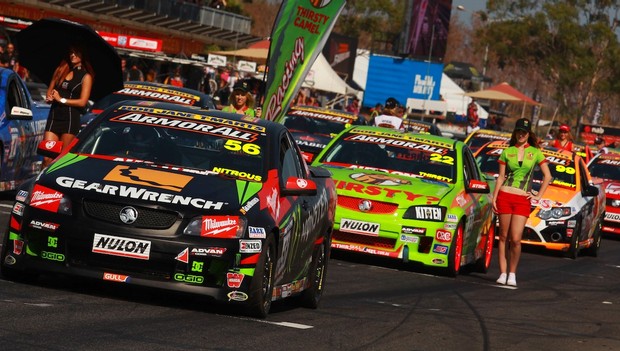 Overthose years, the Utes have not had one wet race in Darwin.

Overthe past seven years, the V8 Ute Series has completed a total of 279 laps and879.43km around Hidden Valley Raceway.

GrantJohnson beat it two races later and held onto the record until 2009, whenBaxter reclaimed the record.

Siedersbroke Johnson’s record set in Race One 2010 with a time of 1:22.88. AlthoughJohnson still broke his lap record that year, by almost two hundredths of asecond, he was out-qualified by both Sieders and 2011 champion Chris Pither.

3.Race Three in 2007 was the closest ever V8 Ute race finish with Jack Elsegoodpassing Grant Johnson in a photo finish by one one-hundredth of a second toclaim the round, putting Elsegood into the Series lead. He held onto the leaduntil the final round at Phillip Island where he had mechanical failure andJohnson took the Series title.

HiddenValley boasts three out of the four closest ever V8 Ute finishes. The other twowere in 2006 – Kim Jane pipped Damien White by only 0.0544s, and in 2009 LaytonCrambrook almost stole the podium from Grant Johnson when he beat him to thechequered flag by a mere 0.0570s to claim Race Three.

4. 2011Series frontrunners Chris Pither, Grant Johnson and David Sieders all had acoming together at turn five Race Two in 2010; Cameron McConville was alsocaught up in the incident breaking his front strut forcing him into the pits.Pither was lucky to get the Ice Break Holden over the line, ending the race withouthis front bar and finishing in 22nd overall.

5.Five of the 32 V8 Ute drivers competing in the 2013 season have raced at HiddenValley all eight times including Gary Baxter, Jack Elsegood and Kim Jane.

Althoughthis will be Longhurst’s first time racing a V8 Ute around the track, he hascompeted at Hidden Valley Raceway three other times in the V8 Supercar Series(2001, 2002 and 2004). It will be almost 12 years to the day since Longhurstlast hit the Top End track.

GlennMcNally will return to Hidden Valley Raceway for his first time since 2009,when he claimed third overall for the round. McNally will race against brotherRhys.

Rhyshas competed against a brother at every Darwin Round except for his Rookie yearin 2010. For the past two years, younger brother Jake raced in the Series andnow Glenn has made a comeback.

BenDunn will also return to the field for the first time this year, however willhit the Darwin track for his seventh time in a V8 Ute.

7.Kim “The Assassin” Jane was unlucky in his seventh appearance at Darwin lastyear when he hit the tyre bundle going into Turn One and rolled onto its roofduring Race Three. Jane made it out of the car and was rushed to the medicalcentre as a precaution but was deemed OK.

Jane’srollover caused the second safety car of the race. The first came whenBundaberg Racing’s Cameron McConville and Craig Dontas made contact at thefirst turn on the first lap. McConville retired for the race and was penalised15 Championship points for the incident.

9.Ryal Harris leads the ENZED Drivers Championship heading into this round by amere seven points ahead of Rhys McNally. Gary Baxter and David Sieders are onequal thirrd (216 points) only 17 points behind Harris, and Nathan Pretty is infifth on 209 points.

10.Cam Wilson will change race numbers from 14 to 24, to promote a 24-hour Go KartChallenge in November at his Gold Coast Karting Centre, and will try and set anew Guinness World Record for the greatest distance travelled in 24 hours. Hewill also be doing this to raise funds for Huntington Association, a hereditarydisease that his father was recently diagnosed with.

Thisis a very special round for Sieders – he will be hanging up his #8 for theRound and running under #7 in memory of his friend Rodney Crick who passed awaylast week. Five time Australian Truck Racing Champion and racing veteran Crick wasa close friend of the Sieders family.

Thedetermination of the Grids is determined as follows:

-Race One grid is determined by Qualifying.

-Race Two grid is determined by a random ballot drawn by the Race Onewinner.  The number that is drawn is the number of Utes that will bereversed on the grid for that race.

-The grid for Race Three will be a progressive grid from the finishing positionsof Race Two.

-The grid for Race Four will be determined by the highest aggregate pointsearned from the results of Race 1,2 and 3. (Qualifying points not included.) Inthe event of a tie, the highest grid position will go to the fastest qualifier.

Thenew qualifying format will also be run at this Round. The new format, similarto the qualifying system used in Formula One, features a 30-minute sessionbroken up into three individual segments.

QualifyingOne will include all 32 V8 Utes and after 10 minutes, the top 20 fastestdrivers will continue into Qualifying Two, for a shorter seven-minute session.The top 10 drivers from this session will then start Qualifying Three, a shortfive-minute session allowing for a one or two lap shootout. The fastest laptimes will then determine the top ten grid for the start of Race One, with thebalance of the grid filled as they drop off in lap time from each segment.

08/05/2013
Related Content
2013 SKYCITY Triple Crown  ›
Stay In The Know
Sign up to the Virgin Australia Supercars Championship Newsletter
This website uses cookies to improve your user experience. By continuing, you will be providing your consent to our use of cookies.Ok