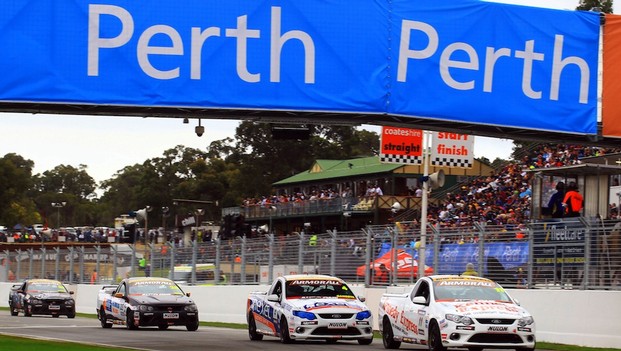 1. This is only the fourth time the V8 Utes Series has raced at Barbagallo Raceway in Perth in its 13-year history. The first was in 2008 and this is the third consecutive year since 2011.

This will be the second Round of the 2013 Auto One V8 Ute Racing Series – protected by ARMOR ALL – a key support category to the V8 Supercar Championship Series at Barbagallo Raceway.

2. The 2012 Round winner, Kim “The Assassin” Jane, holds the current lap record in a time of 1:07.810min. He set the record in Race Three last year, narrowly missing the race win to reigning champ Ryal Harris.

3. There are eight local drivers competing at Round Three including brothers Rhys and Glenn McNally, Todd Zani, Richard Bloomfield and Allan Letcher, who made television and V8 Ute history with his infamous seven-time rollover through the Chase at the Bathurst 1000 in 2009. Rookies Adam Marjoram, Matt Nolan and Rhett Noonan will join former Stealth Formula Ford driver, Peter Major who will debut in the Series.

4. This will be the third time brothers Glenn and Rhys have competed against each other in the V8 Ute Series.

Jake has since stepped out of the Series so Rhys and Glenn will be left to do battle for the McNallys at the event. Glenn will steer a Ford and Rhys a Holden. Brother Mark also raced and used to compete in the V8 Supercar Development Series.

5. Grant Johnson is the most successful driver in the V8 Utes at Barbagallo Raceway, having won the round almost every time he has raced at the event (2008 and 2011). He has won 3 out of the 9 races at the event, won the Armor All Pole Award once and held the Lap Record in 2008. Johnson is also the only Western Australian to win a V8 Ute Race at their home track.

6. Adam Marjoram debuted in Perth last year in the Auto One Wildcard and has returned this year as a full-time driver in the Series, along with three-time Bathurst winner (Bathurst 1000 1988 with Tomas Mezera and 2001 with Mark Skaife; 2009 Bathurst 12 Hour), Tony Longhurst, who was an Auto One Wildcard driver – twice first in 2011 at Sandown Raceway and again last year at Bathurst.

8. Milwaukee Racing’s Nathan Pretty is currently leading the ENZED Drivers Championship. Pretty led the field at the same event last year and went on to claim third overall for the year. Although he is yet to win a race at the circuit, the Victorian has been on podium every year he has raced a V8 Ute in Perth.

Pretty sits on 133 points, only 19 points ahead of Jesus Racing’s Andrew Fisher in second and local Rhys McNally on 113 points in third.

9. Ford has only won three out of the nine races at Barbagallo Raceway. Ryal Harris won two of these and Kris Walton the other. Ford is also yet to win the Round in Perth; Holden has won all three times.

10. A new qualifying format will be introduced at this Round. The new format, similar to the qualifying system used in Formula 1, features a 30 minute session broken up into three individual segments. Qualifying One will include all 32 V8 Utes and after 10 minutes, the top 20 fastest drivers will continue into Qualifying Two, for a shorter seven minute session. The top 10 drivers from this session will then start Qualifying Three, a short five minute session allowing for a one or two lap shootout. The fastest lap times will then determine the top ten grid for the start of Race One, with the balance of the grid filled as they drop off in lap time from each segment.

Friday May 3: Practice One, 8am

Race Three will be televised Live on Sunday May 5 as part of the coverage on Network Seven.

10/04/2013
Related Content
2013 Chill Perth 360  ›
Stay In The Know
Sign up to the Virgin Australia Supercars Championship Newsletter
We use cookies to ensure that we give you the best experience on our website. If you continue to use this site we will assume that you are happy with it.Ok