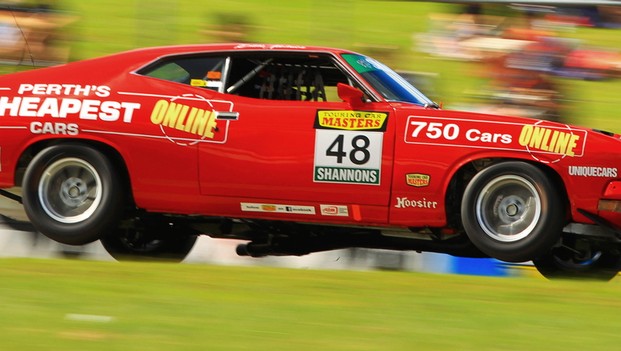 The seventh season of the Masters, the third visit to Barbagallo Raceway, and the second time Eddie Abelnica’s name has dominated series time sheets for a day, with the Perth’s Cheapest Cars Ford XB Coupe showing true pace and balance, while for reigning champion Bowe, and Whiteline Transport Camaro racer King, it was engine replacements being the story of the day.

Ahead of the first session, even before arriving at the circuit, the Bandit Chippers HQ entry of Bressington had called it a day after testing last weekend broke a conrod, leaving the team to rebuild the engine, then head for the local dyno mid-week where the engine soon showed it simply couldn’t continue, leaving Bressington a non-starter for Round Two.

Practice One’s opening lap saw early drama as an unexpected engine failure put Bowe into the garage, an engine replacement starting his Round Two campaign. For Abelnica, Richards and Bullas, it was a happier tale as the Ford trio delivered the early fastest times, with Miedecke’s Lubrimaxx Camaro looking strong. With only early laps in the bag, the confidence in the field appeared to grow as they recalled the Masters 2011 successes in the west, Walmsley, Almond and King were soon in the game, but no sooner than setting his fastest time so far, King’s #85 entry was in the garage, a leaking oil seal seeing the second engine replacement from the session. Abelnica held out, his 1:03.6320 enough to sit ahead as the weekend began.

In the hours before Practice Two, Mason’s Shelby with new sponsor WasteTech Engineering adorning the stunning #3 Mustang, was suffering from minor brake line concerns, but it was enough to reduce the second session’s entry list by yet another. As Mercer headed for the sand trap at turn one, Almond had his Porsche into the top three, while the return of Walmsley had the Masters veteran into sixth after a strong Practice One (fourth) showing in co-Savy Motorsport pilot Kassulke’s second machine, the #99 HQ Monaro.

For Vining-Falvey, the newest face in the series, the opening day of the Chill Perth 360 would be a learning curve, gaining greater understanding and connection with his Don Dimitriadis owned Mustang Coupe, and given limited experience in both the vehicle and on track, Vining-Falvey was keeping the team confident. Eyes were back on the #48 of Abelnica, the red XB affectionately known as ‘Elmo’ was still topping the time sheets, having set a 1:03.7086 on first pass, while his competitors lingered in the 1:04s.

Disappointingly for Gomersall, from eighth, his iseek Racing Torana SL/R5000 suffered gearbox failure close to the end of a strong stint, a routine change into third ending the #35’s session in the sand. Consistency would keep Abelnica atop the times as Practice 2 closed, the Perth’s Cheapest Cars team hoping to see success when it counts at the place that has brought both glory and heartbreak in Abelnica’s previous two visits.

“I came here confident last time, we had a poor meeting and I think I have memories of that but I like the track and I’ve also tasted success here in this series," Abelnica said.

“We’ve got a vastly different car to what we had last time, have done some recent testing which opened up some things to work on so a couple of changes are still scheduled.

“It’s good to be up there, but it’s only early days yet and this series keeps it wide open so it’s anybody’s weekend, with Bowe back and Almond’s Porsche being one to keep an eye on, but it’s always good to have the performance early on for a positive starting point."

The afternoon has kept the Masters crews busy in the paddock with engine and gearbox replacements including a brand new, untested engine now into the #85 Camaro of King, a second gearbox fix in two days for Gomersall, oil and brake line replacements, spring and suspension changes, with the common theme appearing to be looking forward to seeing what new tyres bring tomorrow.

18/04/2013
Stay In The Know
Sign up to the Repco Supercars Championship Newsletter
We use cookies to ensure that we give you the best experience on our website. If you continue to use this site we will assume that you are happy with it.Ok