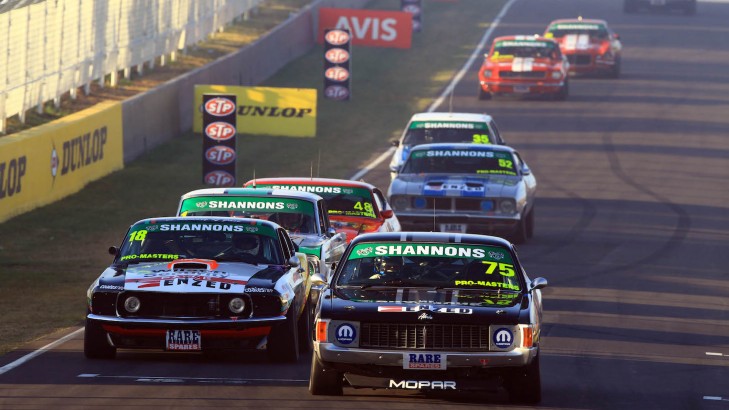 The ENZED Touring Car Masters will return to two favourite events in 2015 following confirmation of the series' calendar for next year.

TCM cars and stars will return to Symmons Plains in Tasmania and the iconic Muscle Car Masters Event in Sydney as part of an expanded eight-round schedule set for 2015, with a majority of rounds to be held at major V8 Supercars events.

The 2015 series starts in Adelaide at the Clipsal 500 and, following a return to Symmons Plains for the first time since 2010, will see rounds at Winton (May), Darwin's Hidden Valley Raceway (June) and Queensland Raceway (August) alongside the V8 Supercars - click here for the full V8 Supercars 2015 calendar.

Father's Day weekend will see a highly anticipated return to Sydney Motorsport Park and the Muscle Car Masters event before the annual trip to Mount Panorama and the Supercheap Auto Bathurst 1000 in October.

The series will conclude at the Phillip Island Grand Prix circuit for the third time in late November next year.

Seven of the eight scheduled rounds will see TCM return to the V8 Supercars program where the category is consistently rated one of themost popular support acts.

The return to Tasmania follows significant interest in the region thanks to the continued success of local heroes John Bowe and Greg Crick in TCM recently.

Further details about the 2015 ENZED Touring Car Masters Series including race formats, the series TV package and other details will be announced in due course.

The final round of the 2014 series will be contested this weekend at the Phillip Island Grand Prix circuit, with two of the three classes still up for grabs.

Mark King holds an unassailable lead in the ProAm class in his Chevrolet Camaro.

Click here for more information on this weekend's Plus Fitness Phillip Island 400, including ticket and camping options.

10/09/2014
Related Content
2014 Plus Fitness Phillip Island 400  ›
Stay In The Know
Sign up to the Virgin Australia Supercars Championship Newsletter
We use cookies to ensure that we give you the best experience on our website. If you continue to use this site we will assume that you are happy with it.Ok