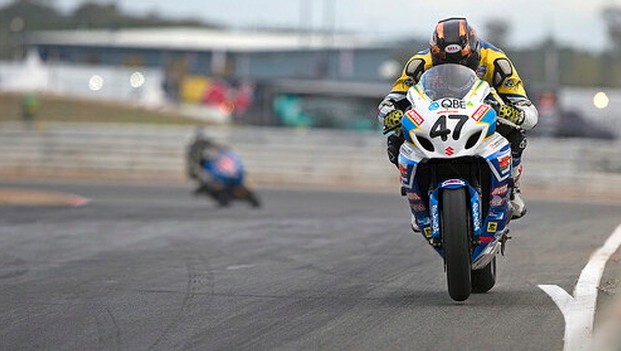 As a support series to V8 Supercars, the QBE AustralianSuperbike Championship (ASBK) officially kicked off today at SymmonsPlains.

BMW rider Glenn Allerton stamped his mark on the single AustralianSuperbikes Qualifying session this afternoon, posting a lap time half a secondclear of his competitors on his second flying lap of the 2.41km SymmonsPlains circuit. The Next Gen Motorsport rider was conscious of preserving histyres and psyching out his rivals, and felt confident enough to sit the firsthalf of the session out in Pit lane.

Team Suzuki’s Wayne Maxwell continues to improve his feelingwith the Suzuki GSX-R and finished second, 0.472 of a second behind Allertonand only 0.175 of a second ahead of old team mate Jamie Stauffer.

Rounding up the top five was Racers Edge Suzuki’s BeauBeaton who has returned to the Australian Superbike series fulltime. Beaton’srecent arm pump surgery combined with setup improvements on the Suzuki GSX-R provedto be working in his favour.

A special goes to Sophie Lovett for improving two secondsfrom the morning practice session on a track she hasn’t ever ridden on. Theonly female rider did get a slap on the wrist from race control during thesession for hair slipping out of her helmet.

Superpole kicks of at 7.50am tomorrow morning, which will befollowed by Race One at 12.30pm which will be televised as part of the V8 Supercarcoverage on the seven network at approximately 1.35pm.