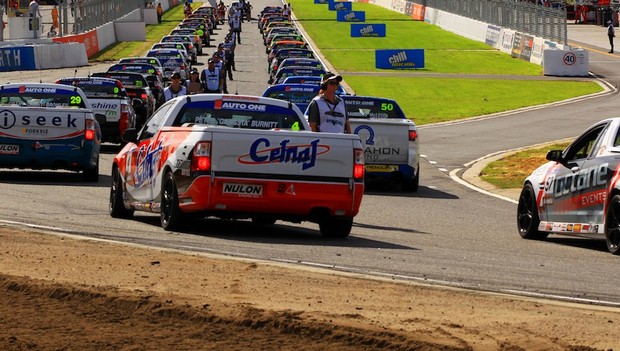 The 2013 Auto One V8 Ute Racing Series – protected by ARMOR ALL – will continue a telecast arrangement with Fox Sports, with all eight rounds of the series replayed on SPEED Channel throughout the year.

The Australian V8 Ute Racing Series has been televised on Fox Sports since the inception in 2001, and through SPEED since its foundation two years ago.

James Harrison, Channel Manager of SPEED, is looking forward to having the V8 Utes back for another year.

“V8 Utes are a favourite with all our SPEED viewers, there’s always plenty of action and some great new names coming through the series, which should make this year, one of the best. The V8 Utes continue to grow in entertainment and audience share, and are a great fit for SPEED,” explained Harrison.

Category Manager, Craig Denyer of SPHERIX, is excited to continue the relationship with Fox Sports.

“It’s great for fans, they now have more chances to view our races and it’s directly targeted to the motorsport audience, it’s also added exposure for our series and team commercial partners,” said Denyer.

The Seven Network has also confirmed an increase in the number of live races for the V8 Utes throughout the year. As part of the V8 Supercar telecasts, V8 Ute’s will receive two live races from all remaining rounds of the 2013 series, with the exception of Townsville, which will have the one live race.

“This year, the series will have 14 live races, and eight one hour post produced programmes to wrap up every series round on the Seven Network.  Combined with the replays on SPEED, fans will be able to access over 25 hours of television coverage of the series,” Denyer enthused. “In addition, over 80 million homes across the world can now access to V8 Ute racing through Motors TV and SPEED Channel Two in the U.S.”

“We are also producing a highlights DVD of the past 10 years of V8 Ute racing – the best races, the biggest names, and the heaviest hits. This will be a great snapshot of the best ever V8 Ute action, and be available for sale through Chevron Publishing by the end of the year.”

Round Replays will commence on SPEED (Foxtel Ch. 512) on 29th May and 5th June, be sure to check local guides.

The V8 Utes Series consists of 32 Ute field made up of 16 Ford and 16 Holdens. The Series has been in action since 2001 and is televised nationally through the Seven Network.

03/05/2013
Stay In The Know
Sign up to the Virgin Australia Supercars Championship Newsletter
This website uses cookies to improve your user experience. By continuing, you will be providing your consent to our use of cookies.Ok