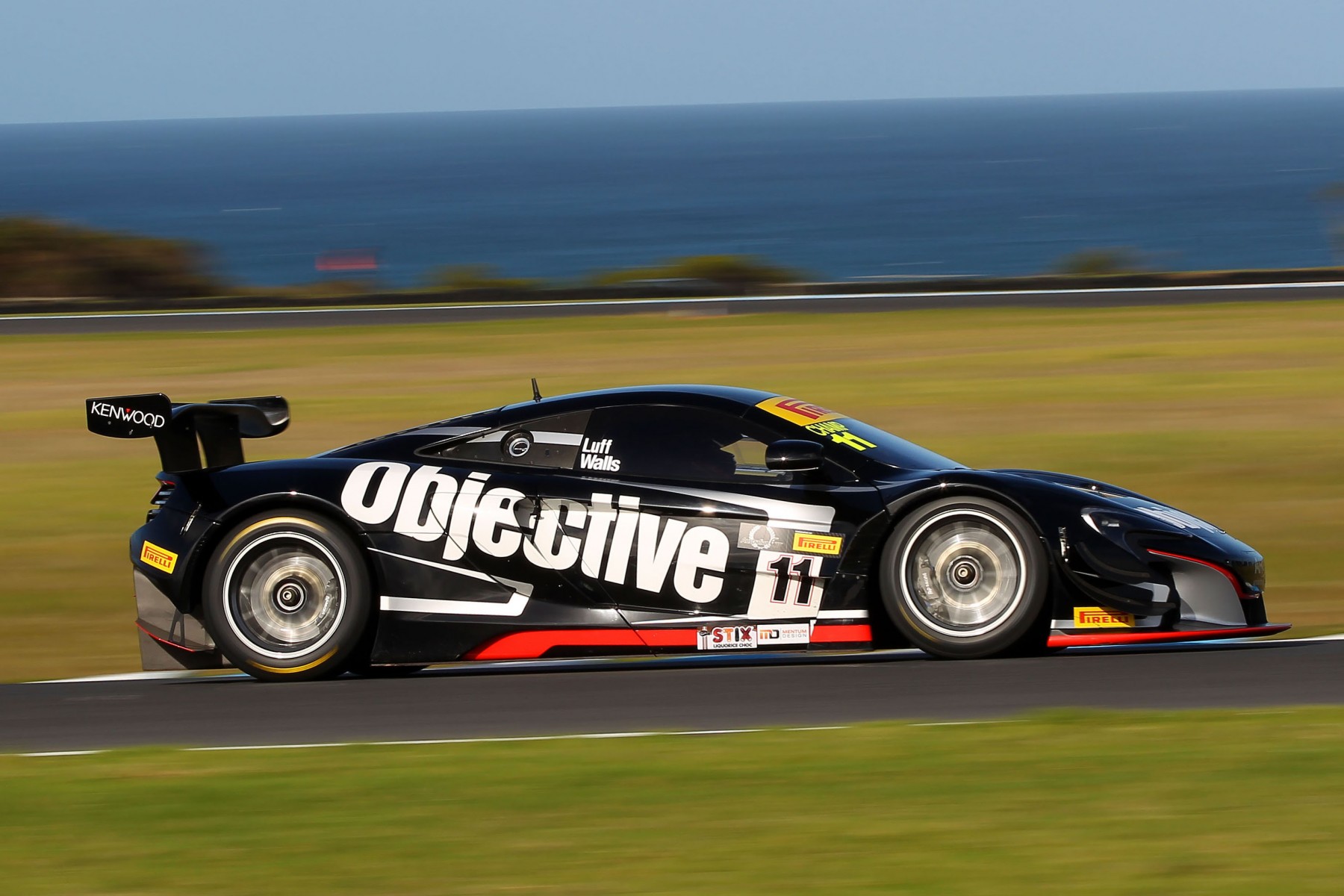 Tim Slade will return to the Liqui-Moly Bathurst 12 Hour next February and the experienced V8 Supercars driver says it will be a perfect way to kick start a new-look 2016 season.

Slade will switch from Walkinshaw Racing to Brad Jones Racing for the 2016 V8 Supercars season – but before starting work at his new team will join Objective Racing for the 12 Hour on 5-7 February.

The quartet will steer Walls’ stunning black McLaren 650S GT3 in a quest for a strong Bathurst result.

“We will test (the McLaren) for a day or two before the race and that’s all miles. Then you get plenty during the race and across the weekend as well.

“For sure it’s definitely beneficial for driving for the rest of the year, and especially at the start of it.

“The other thing is that it’s miles around Bathurst, which is invaluable. You can’t get enough miles around there.”

The 2016 Bathurst 12 Hour will mark Slade’s fourth attempt at the race – one where he has a strong track record.

He made his Bathurst debut in 2007, where he shared a Mini Cooper S with Trevor Keene and Adam Bretherton to finish 12th outright and second in class.

After several years away, he returned with Erebus Motorsport in 2012 and, sharing a Mercedes Benz SLS AMG GT3 with Jeroen Bleekemolen, Peter Hackett and Brett Curtis, finished second just over one minute behind the winning Phoenix Racing Audi.

He returned to the Mountain with Erebus the following year and his car remained in contention for the race throughout, prior to a late-race incident that caused damage and dropped them down the order to eventually finish sixth.

“I did the two years with Erebus but my first one was driving the Mini in 2007. It was my first year out of Formula Ford and I was racing in the Development Series. I wanted some laps at Bathurst and it was awesome fun.

“We went a little bit faster in the SLS in 2012 and got second place. I really enjoy the event and the cars – they are awesome to drive. I enjoy the longer distance racing and the strategy side of things and you couldn’t think of a better track to do 12 hours of it.

“It was obvious even between 2012 and 2013 that the event had grown a lot. Having watched it the last few years and seeing the entry list and the hype around it shows it’s just getting bigger and better.

“It’s going to be pretty cool to be doing it in an outright car and with a strong team and drivers.”

Despite several strong campaigns, a McLaren is yet to score a podium finish in the Liqui-Moly Bathurst 12 Hour with a fourth place result for Shane van Gisbergen, Andrew Kirkaldy, Klark Quinn and Tony Quinn in 2014 the best result yet for the famous British brand.

Van Gisbergen did, however, show off the raw speed of the car by qualifying second and setting a new lap record during the race.

Slade is looking forward to getting his hands on the Objective Racing McLaren and believes the car is capable of scoring a strong result.

“From speaking to the guys in the team, I think they (McLarens) are a little more difficult to drive than the SLS or an Audi, but having not yet driven the car it’s a question mark,” Slade said.

“Van Giz has shown that the speed is there – they won at Highlands and have had strong results everywhere he’s driven it. Our driving squad is very good and the McElrea team run a good show so I think we’re going to be good.

“Any outright car, despite the brand, will be in with a shot as long as the team and drivers are strong.

Slade will be in action at the Coates Hire Sydney 500 at Sydney Olympic Park this weekend.

Liqui-Moly Bathurst 12 Hour tickets will be on sale through the circuit Ticketek box office for fans attending the big V8 Supercars grand finale.