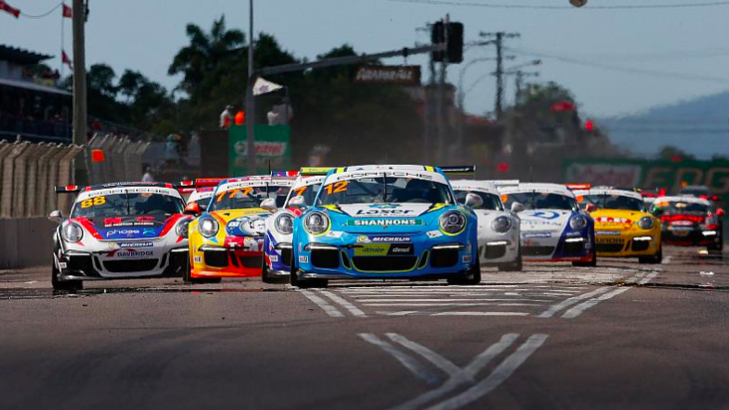 Porsche Carrera Cup Australia points leader Steven Richards is confident of a strong second half of the season following an unorthodox preparation for this weekend's Sydney Motorsport Park round.

Richards, who is tied on points with fellow front-runner Warren Luff, is today concluding a six-day Postie Bike journey from Melbourne to Gold Coast for the Laser Group Postie Bike Challenge - an initiative to raise awareness of mental illness and depression amongst the trade industry and male population for beyondblue.

Richards and his 21 fellow riders are finishing their 2000km journey today before the Victorian travels to Sydney Motorsport Park to defend his Carrera Cup points lead.

"This trip has been on the cards for 12 months. Many tradies experience tough times so Laser Plumbing & Electrical came up with this idea in support of beyondblue. We aimed to raise about $1500 each and we've managed to raise over $100,000 in total," said Richards.

"It has been a great journey with all kinds of weather - we've worn jackets and thermals to t-shirts - and have only experienced one flat tyre between us."

Though Richards' event preparation is unconventional, he is approaching this round like any other.

"We'll approach the Sydney event much the same as we did at Townsville. We have a good handle on the car at the moment and, with half the Championship still to go, we'll keep doing what we're doing and see where it takes us."

Richards' next round will be at the Wilson Security Sandown 500, where he'll not only steer the Porsche, but feature in the headline race as Red Bull superstar Craig Lowndes' co-driver.

Craig Baird sits third in the Carrera Cup Championship behind Richards and Luff, and will this weekend move past Rodney Jane to claim second on the all-time round starts list for the category with his 55th round start.

The Elite Class will grow this round with the inclusion of two newcomers - Scott Taylor, who has stepped up to the categorywith two seasons' experience in the Porsche GT3 Cup Challenge Australia,and Greg Taylor (unrelated), in thePorsche 911 GT3 Cup formerly driven by Dean Koutsoumidis in the opening two rounds.

The Porsche Carrera Cup is just one of the great categories running at the weekend, with the Australian Touring Car Masters - and Richards' father Jim behind the wheel, Australian GT and Radical Australia on the bill.

Tickets are available now for the Sydney Motorsport Park event, running from August 22-24.