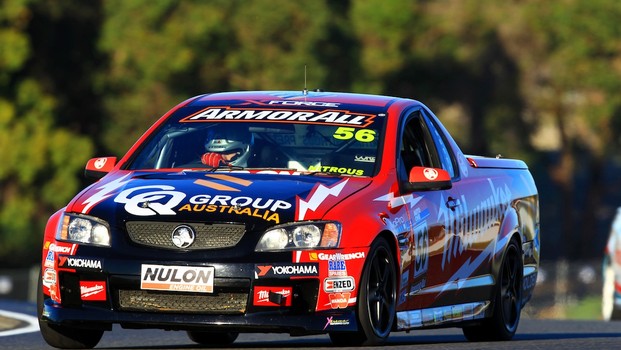 The new three stage V8 Ute qualifying format claimed its first high profile victim during Round Two of the Auto One V8 Ute Series - protected by ARMOR ALL - at Perth's Barbagallo Raceway this afternoon. Series leader Nathan Pretty suffered an engine failure on the out lap and will start dead last for tomorrow's first 14 lap race.

"It's very disappointing - we went through last year with no dramas and this engine is brand new, it's only one race old so it doesn't make sense, I haven't buzzed it or that sort of thing, my down changes are nice, so it's extremely disappointing that it happened on the very first lap of Qualifying. It's not going to put us down, we're just going to go change it and put the other one in and get the elbows out," Pretty said.

The slowest 12 drivers dropped out at the end of the first 10 minute Qualifying session, Qualifying Two was a seven minute session, which saw the next ten slowest drop out, with the fastest 10 then fighting out the ARMOR ALL Pole award in a five minute Shootout.

Sydney's David Sieders claimed the fastest time overall, by seven hundredths of a second from reigning champ Ryal Harris, with veteran touring car star Tony Longhurst the first of the Holdens, only two tenths off the pole time.

"I missed out on the Adelaide one, which is my pet one, this was a long time coming - I've tried hard to get a pole or a good result here in Perth but for some reason it doesn't happen, it's always eluded me however today we got it, so I'm happy," said an elated Sieders.

The New South Welshman had been practicing the new qualifying format and it all went to plan for him.

"We had an inkling of what it (Qualifying) could be like, we went out and did a simulation of the qualifying and it rolled exactly like that, we had Ryal playing rear gunner to us in the first two sections so I made sure he was in front of me in the last section," said Sieders.

Kris Walton's Rentco Ford was next, ahead of the big improver Stephen White in the Erebus Racing Holden who claimed his best result for the year in fifth, from Jesse Dixon, Gary Baxter, hometown hero Rhys McNally who was eighth overall in the Stratco Holden, from Perth's Peter Major and Bob Jane T-Mart driver Kim Jane.

Jane topped the timesheets earlier in the combined Practice sessions, which was lucky after he caused a Red Flag in the second session, excluding him from rejoining the track. He visited the same area during Turn One in qualifying, but was lucky to hit the grass and rejoin the field.

Pretty now sits in equal fourth alongside Kris Walton on 134 points. Gary Baxter and Rhys McNally are on equal second on 138 points and reigning champion Ryal Harris has moved into the top spot on the ENZED Drivers Championship Leader-board.

Driver's will need to watch the curbs in the races over the weekend, after five drivers were penalised including Andrew Fisher, knocking the front-runner out in Q2.

Race fans and teams praised the new format, which emulates the style of qualifying used in Formula 1, and which will be used at 4 of the V8 Ute Series rounds this year.

16/04/2013
Related Content
2013 Chill Perth 360  ›
Stay In The Know
Sign up to the Virgin Australia Supercars Championship Newsletter
We use cookies to ensure that we give you the best experience on our website. If you continue to use this site we will assume that you are happy with it.Ok