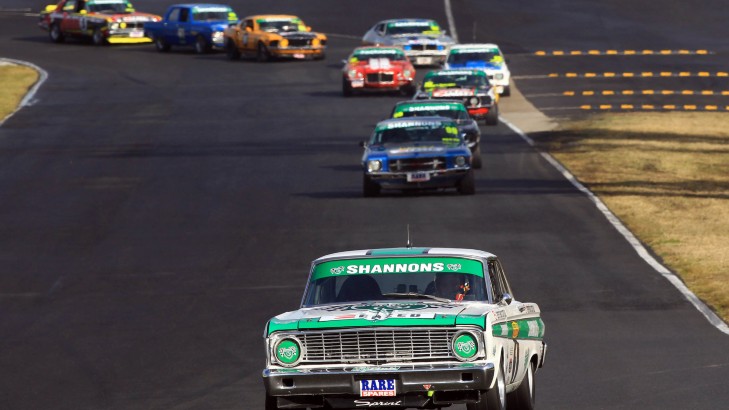 The final day of the Chill Perth 360 saw a busy morning in the Touring Car Masters paddock as engines were checked,gearboxes finished and setups refined ahead of Race Two at Barbagallo Raceway for Round Two of the 2013 season.

With the top eight reversed for Race Two, Mason and Crick took to the front row, with Les Walmsley and Andrew Miedecke behind, Jim Richards, Keith Kassulke, John Bowe and history-making Race One winner Mike Almond buried in the pack. As the lights went green,Miedecke bogged down, Crick smoked away from the grid, with Bowe and Almond getting fliers to commence theircharge to the front. Abelnica’s XB went wide, going side to side with Richard’s Sprint into turn one, with Bullas’ XAdropping two wheels into the dirt as the pack made the first run through turn four.

Muscle cars were going sideways on the run to the main straight, the battles clearly on across the classes. Walmsley wasimpressing, his HQ soon into second as his consistent weekend continued, while Bowe moved under Greg Keene’s Porschethrough the opening turns and Kassulke was on the charge and defensive to keep his XB clean. Miedecke took to theinside line for his next move, under Crick’s Charger with Almond vying in.

Out front, Steve Mason was still holding strong, his Shelby with the goods to keep his Class A rivals at bay as he found the linesand kept the horsepower pumping. Jason Gomersall was pushing his Torana, clearly past the earlier gearbox gremlins, lockedin a battle with Mark King and Wayne Mercer, the #35 SL/R 5000 and #85 Camaro swapping positions before King charged further upthe field. Kassulke was looking strong, making a move on Richards at turn seven.

Graham Alexander was looking strong, but soon found himself sideways through the sand trap, his HT Monaro finding the tyre walland bringing out the Safety Car, the #57 taken away in need of much work. Further heartbreak unfolded for the SavyMotorsport crew as Walmsley’s #99 HQ lost oil pressure and retired from the race to save yet another Masters engineexpiry.

Mason would lead from the restart with ten laps remaining, the fastest in the field now lapping just seconds off the leadingDunlop V8 Supercar times. Miedecke got the jump on the restart to lead the field away, Mason finally overcome, withKeene defending as Chris Stillwell’s Mustang looked to the find a gain. Almond wanted in up the front, filling Mason’s thenMiedecke’s mirrors with the #26 Porsche. Bowe versus Richards was on, the two legends racing once again as the lapsfell away, with Bullas and Abelnica closing in on the Keene/Stillwell stoush. Kassulke and Greg Crick went side by side to turnseven, Bullas and Abelnica’s dual was on again, side by side into turn one and through the esses, with Almond sharingtrack room with Mason.

Bowe and Richards were hot on the challenge, swapping passing opportunities, keeping Keene in on the fight. WhileO’Brien had dropped to the rear of the field, the #8 HQ was putting on a show, working hard to drive back to the field,taking turn seven sideways. Almond had found a way under Mason for second, now on the hunt for Miedecke in the lead,as Gomersall and Mercer continued to battle side by side in a drag race along the main straight. Bowe was now underCrick, and King had passed Stillwell to hunt down the coupe pair of Bullas and Abelnica.

Almond was lapping in the low 1min03s, his closest rival Miedecke in the 1min04s, clearly wanting another taste of victory, theyoung-gun charged on as Camaro versus Porsche unfolded, the horsepower versus the handling, the short circuit seeingAlmond take his advantage and the lead.

Richards was now all over Crick’s bumper, moving to the inside to capture sixth.Stillwell took a run through the dirt, Bowe was putting the moves on Kassulke as the XB continued to reel in the Shelby ofMason. O’Brien was coming back to the pack, showing performance certainly not lacking in the HQ. Kassulke and Bowewould capture Mason, their Class A power getting the power down along the straights, but Mason hadn’t made it easy forthe pair, using all his racecraft to keep the Shelby at the heart of the battle. And then it was over – Almond drove away tosecure back-to-back race victories for Porsche, Miedecke in second, with Kassulke strong in third, followed by Bowe,Mason, Richards, Crick, Keene, Bullas and Abelnica rounding out the 10, with Mason’s fifth securing him the Class Brace honours.

“That was a fantastic race and I was lucky to get a good start, then be up to fifth and kept it going to make the tough moves into third which wasn’t easy," Almond said. "Really it was then a matter of putting my head down to try and stay battling Miedecke and that went on for a while with our cars strong in different areas, but I got him under brakes. Clean, hard racing – that’s how it should be.

“I was thinking about it in the car, thinking ‘how great is this?!’ racing with Andrew (Miedecke), then looking in my mirrors for JB (John Bowe) and Jim (Richards) knowing they’d be making their way through in the reverse grid.

“It’s been a great weekend so far, there’s no doubt about that, and I think we’re showing why this series is so popular. A great track, a great car and a great weekend but Race 3 is still to come so anything can happen, we just want to finish it clean.”

30/04/2013
Stay In The Know
Sign up to the Virgin Australia Supercars Championship Newsletter
This website uses cookies to improve your user experience. By continuing, you will be providing your consent to our use of cookies.Ok