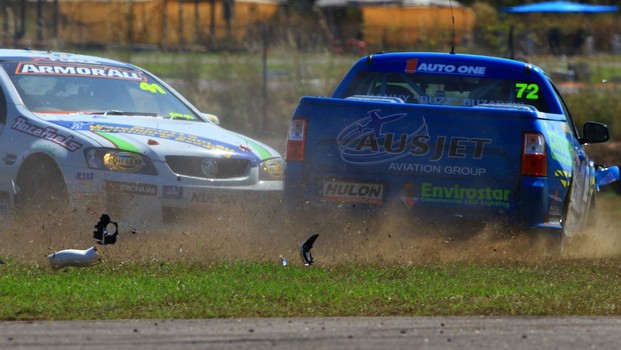 2011 V8 Ute Champion and current V8 Supercar Development Series driver Chris Pither claimed the ARMOR ALL Pole Award today and Race One at Darwin’s Hidden Valley. A reverse of the top 18 grid for Race Two, saw Reigning Champion Ryal Harris extend his series lead, with a stellar drive from 16th to first during Round Three of the Auto One V8 Ute Racing Series – protected by ARMOR ALL.

Pither’s Holden posted his fastest time in Qualifying, pipping David Sieders Ford by two thousandths of a second, and broke the Londonberry based drivers record in a time of 1min21.5078. The top 18 drivers in qualifying were separated by less than a second.

The Holden and Ford battle continued in Race One, Pither started on the front row alongside Sieders, sporting number 7 this weekend in memory of Australian Super Truck Champion Rodney Crick who passed away recently. Although Sieders lost his lead to Pither mid-race, he set a new lap record in a time of 1min22.26.

Gold Coaster Harris stayed in a consistent third for the entire race, ahead of Bob Jane T-Marts Kim Jane, who was feeling the pressure from Nathan Pretty, Rhys McNally and Jesus Racing’s Andrew Fisher who claimed fifth, sixth and seventh consecutively.

The battle was on for eigth position, with McLeod forced to relinquish the spot when he spun out mid race at Turn One. Kris Walton was the next to go when he received a tap from Auto One Racer Adam Marjoram, who was slapped with a five grid position penalty for the incident. Gary Baxter came home the victor in his Sage Automation Holden ahead of Rookie Elliot Barbour in ninth and Craig Dontas, who closed out the top ten in his Thirsty Camel Holden.

Glenn McNally and Gerard McLeod drew the front row for the top 18 reverse Grid Race Two. McLeod got off to a ripper of a start in his Macmahon Mining VE, leaving McNally on the line.

McLeod was in great form until a safety car was called after Jeremy Gray’s contact with Kris Walton sent him into the tyre bundle, then Peter Burnitt put his CETNAJ Ford into the sandtrap at turn 10.

Sydney’s Ben Dunn was all over McLeod and made contact with the rear of McLeod’s Holden, turning him around while Walton and Stephen White slipped through. “Whitedog” held out Walton, who went wide into turn one on lap eight after a massive lock up under brakes. Harris closed in on the Erebus Racing Holden on the second last lap after White got sideways under brakes to claim the race win and the SS Inductions Hard Charger Award ($500 cash) for passing the most amount of Utes, the reigning champ was ecstatic with the result.

“It was a dream run, obviously some of the other guys got caught up in front of me, but it’s about time I had a bit of luck and just tried to keep our nose clean," Harris said.

"I had a bit of an incident with Whitey (Stephen White) when I tried to come through but I backed off and gave him room. He’s great, he’s a good hard racer and it’s the first time I’ve been in a battle with him so it’s good to see how he operates and I think he’ll be up the front as the year progresses. We’re really happy with the new format and the result, and I  will start on Pole tomorrow so if we can stay out of trouble, we’ll have a good weekend."

Whitedog still posted his best ever V8 Ute result and was over the moon.

“It feels fantastic, this category is so challenging and so difficult to get good results and be competitive at the front, so in only our third round to have top three finish is just great  – it’s the same for everybody and we are just stoked,” White said.

“The Assassin” Jane had a great drive coming home in third in front of teammates Kris Walton, and Ryan Hansford, Rhys McNally claimed sixth ahead of Sieders, Baxter, Pither and rookie Marjoram, who rounded out the top ten.

Harris will start on the Pole tomorrow for Race Three at 8:30am followed by Race 4 at 12:20pm, which will be televised in a delayed telecast on Network Seven around 2:50pm (NT Time) – be sure to check your local guides.

06/06/2013
Related Content
2013 SKYCITY Triple Crown  ›
Stay In The Know
Sign up to the Virgin Australia Supercars Championship Newsletter
This website uses cookies to improve your user experience. By continuing, you will be providing your consent to our use of cookies.Ok