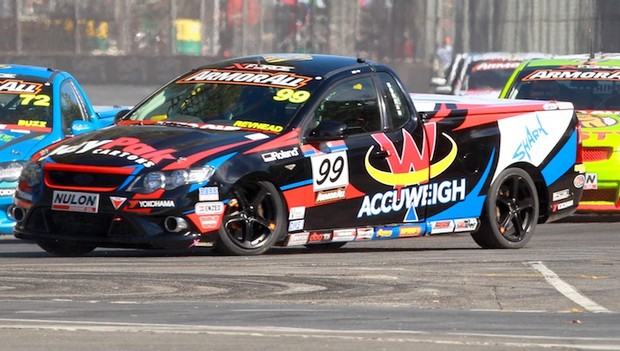 V8 Ute Rookie of the Year contender Rhett “Rev Head” Noonan is pumped for action on home turf when he takes to the track for Round 3 of the Auto One V8 Ute Racing Series – protected by Armor All – at the Chill Perth 360 at Barbagallo Raceway from May 3 to 5.

The former Formula Ford driver is hoping his home round won’t be the end of his 2013 V8 Ute Season campaign.

“I’m looking for a bit more help to get me through the rest of the year,” Noonan said.

“Ben (Dunn) said I can continue in his Ute if I can support myself.

“Accuweigh and Jaypak have been great supporters since my Formula Ford career and if we keep going for the season we will continue to run them on our car, we just need a few more dollars to get us over the line.”

The Piara Waters local is currently steering V8 Ute Veteran and former Waratahs Rugby Union Player Ben Dunn’s Ford, and although the V8 Ute Board Member would love to race this season he’d be happy to keep the Ute available to the youngster.

“Rhett’s only starting his career and it would be great to see him continue to fight for the Rookie title,” Dunn said. “He showed a lot of potential in his first round at Clipsal and hopefully he can persist through the season.”

Noonan’s car is run by Sieders Racing, which has a long-line of Rookie champions in the team including 2012 runner-up David Sieders (2010 Rookie), Andrew Fisher (2007 Rookie) and the team will also be joined by 2008 Rookie of the Year, Glenn McNally for the Perth Round.

Noonan was unlucky to have a DNF in Race Three at Adelaide, due to contact from Noel Edge at turn one off the start.

Richard Bloomfield was also caught up in the incident and was unlucky to clip Noonan, damaging the front end.

“I was tagged by Bloomfield (Richard) and someone else whilst I was going backwards so that was a bit of a scary moment,” Noonan said post-race. “I broke the diff in it, drove it back to the pits and the boys said it was all over.”

The young gun would not let the incident faze him though: “It will be business as usual. I’ve only raced at Barbagallo twice in the Formula Ford State Series. I’ve never driven a sedan there, but I’ve done heaps of laps in an open wheeler. We’re just looking to build on where we were at Clipsal and aim for those top 10, top 15 finishes, I can’t wait.”

Noonan is testing with the Sieders Racing Team tomorrow at Sydney Motorsport Park and will hit his home track on Friday May 3 for two practice sessions before the races over the weekend.

05/04/2013
Related Content
2013 Chill Perth 360  ›
Stay In The Know
Sign up to the Virgin Australia Supercars Championship Newsletter
We use cookies to ensure that we give you the best experience on our website. If you continue to use this site we will assume that you are happy with it.Ok