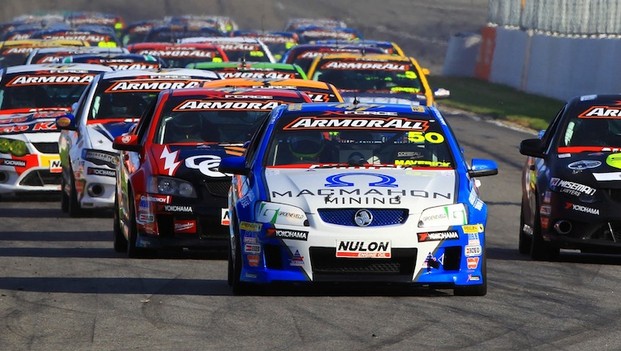 Perth based Rhys McNallywill start his Holden on the front-row tomorrow alongside Ford driver DavidSieders, who took out Race One before Nathan Pretty claimed Race Two at RoundTwo of the Auto One V8 Ute Racing Series – protected by ARMOR ALL – atBarbagallo Raceway, Saturday May 4.

Pretty started on the secondrow and got a great start off the line and pushed in behind teammate GerardMcLeod who started on pole alongside Jeremy Gray.

“I wasn’t going to hang around, I thought I’d let Gerry (McLeod) lead the firstlap, he let me go easily, I just watched my mirrors and watched them all havingfun behind me but I wasn’t hanging around to get involved in it, that’s forsure,” Pretty said.

Rhys McNally moved up 12 spots to finish in second, handing him the SSInductions Hard Charger Award and $500 cash. It wasn’t an easy feat for theWest Aussie, he had an intense battle by lap seven he was battling with fourother drivers (McLeod, Wayne Wakefield and Elliot Barbour) for second positionso was elated to take second.

“It was such a great feelingto come home like that in front of the home-crowd,” McNally said. “The STRATCOguys had their corporate box right near the last corner so I thought I’d put abit a show on for them. It was a really tough race so it was great to come homein second.”

McNally overtook the Macmahon Mining Holden of McLeod on the second lastlap, McLeod the victim of a tap from Elliot Barbour on the final lap, sendinghim off the track and out of the race.

Wakefield and Barbour were left to battle it out for third, which camedown to the chequered flag –for the former Bathurst 1000 Pole sitter it was agreat feeling.

“I’m back!” Wakefield said with a grin, “Finally it’s been a long hard road,even though I’ve only done three race meetings, but It’s a steep learning curvein these things but I had a bit of an advantage then, starting fourth inreverse grid but I’m taking it anyway, It was a tough race, McNally wasdropping oil everywhere and we were sliding all over the place at the end butit was an awesome race.”

The next battle was on for fifthand Gold Coast Karting owner Cam Wilson came out the victor ahead of Auto OneRacing’s Adam Marjoram in sixth, Jeremy Gray, Craig Dontas, Sieders and Harris roundingout the top 10. Marjoram had a great drive from p10 to finish in sixth.

“It was a really exciting race – I started 10th moved up to sixth andnever looked back, the confidence the home crowd is giving me is starting toflow on and this is the only track on the calendar that I know, so I don’t needto learn a new track so it’s all starting to gel together at the right moment,”Marjoram said.

Ryan Hansford was unlucky to get pushed off the track early in the race,causing a flat tyre and issues with his power steering, retiring the HawkinsTransport Ford.

Sieders and McNally will start on the front for tomorrow’s Race Threefrom Harris and Longhurst. The round decider televised live on Network Seventomorrow at 1:35pm (West Australian Time – Check local Guides).

26/04/2013
Related Content
2013 Chill Perth 360  ›
Stay In The Know
Sign up to the Virgin Australia Supercars Championship Newsletter
This website uses cookies to improve your user experience. By continuing, you will be providing your consent to our use of cookies.Ok