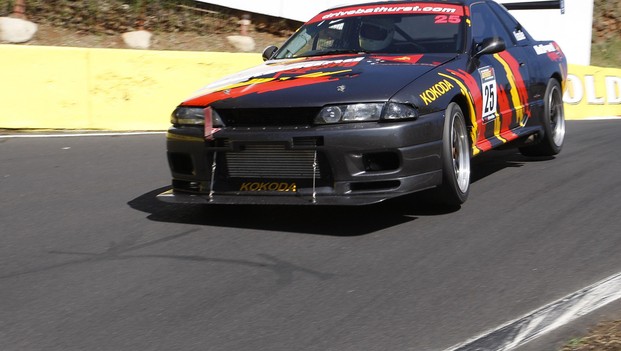 Having joined the Touring Car Masters in 2010, now the proud owner of both Ford and Holden muscle cars in the Masters ranks, Papua New Guinea-based racer Keith Kassulke has come to know the honours and heartbreaks of motorsport. Recently taking out the Class A Pro-Am round win at Hidden Valley Raceway, the only international face in the Touring Car Masters field flies in and out to re-join his Savy Motorsport prepared machines, and is making the trip to Australia once again, this weekend to return his Nissan Skyline R32 GT-R to the tarmac in Sydney.

In the northern heat of Darwin, Kassulke headed to the Top End with a focus on just one vehicle, his 1974 Outbound Racing Ford XB Coupe, looking for a strong performance to lift him further towards to the top of the Class A Outright series title standings, setting himself amongst the legends and statesmen of the sport, and cementing Kassulke’s position as one of the series’ strongest performers.

Opening the weekend, Kassulke was an early fixture in the timesheets, comfortably in the top ten after the first session, but Kassulke and his crew wanted more, changing the setup to avoid pushing into the hairpin, to return to the track for Practice Two where the #52 Outbound Racing machine set the pace, Kassulke topping the times ahead of competitors including Bowe, Crick, Miedecke, Bullas and Richards. Going on to qualify in the top ten, Kassulke had an air of confidence as the field took to the grid for the times that count, the three races.

Race One saw a strong start by the #52 Ford, Kassulke into seventh by the second lap, going on to make a pass under Bullas for sixth, finding a way through on the Camaro of King, to go on and use the final seven laps to not only hunt down the Tilley Falcon ahead, but play to his defensive strengths to keep the Chevrolet in the mirrors and come home in fourth.

The top fifty percent reverse grid rules would kick in for Race Two, putting Kassulke into seventh position, sharing row five with the Tilley Falcon, the second race of the weekend promising to be a battle from the green. Never a moment to pause, the 12 laps had the mighty Coupe battling for position at every turn, its power on the straight an advantage, but its weight always a concern with tyre wear in the heat of the day. Kassulke again battled with Class A counterparts Bullas and King, making a pass on Stillwell in the closing stages to claim fifth at the flag.

Race Three, the final race of the weekend, and on aggregate performance, Kassulke lined up from position five, Miedecke on the outside, Richards and Crick ahead. Taking on the opening corners of competition like they were the last, Kassulke and Miedecke made light contact as the duo went side by side towards the main straight for the first time. It was soon time to get past the blue oval of Bullas and hunt Crick’s Charger up ahead, but Miedecke would make his return to the battle, putting Kassulke back into sixth as the XB was left to hold off a freight train of muscle cars for the final eight laps of the weekend, Kassulke crossing the line for the final time in sixth.

A tough weekend would come to a close, Kassulke having done enough against his professional challengers to take out fifth outright for Round Three, along with the first place honours in the Class A Pro-Am classifications, a surprise achievement for the Papua New Guinean.

“I’m absolutely stoked! I had a pretty good weekend, with a few near misses, and some very slippery times in the last race, but I made it and I was very, very, happy to cross the line cleanly, even more so now with this accolade.

“This was my third visit to Hidden Valley, and I love it more and more each time I come here. The group of drivers that I race with are fantastic, and obviously I love all the cars, but of course I love my car more, and I love the category; the cars, the drivers, and particularly coming back here, it’s a great place to be and a real joy to be recognised as the top Pro-Am entrant.

“Queensland is not that far away, only three weeks, and unfortunately the XB has a few panel repairs that need to be repaired, but the Savy Motorsport crew will get into that pretty quickly and she’ll be back looking her best to hopefully perform at her best again.

“Going to Queensland, and with Brisbane being my original home town, I will have plenty of family and friends supporting me there, and after both of my cars were top three last year, we want to be on the podium again!”

Kassulke currently sits seventh in the Class A Outright points standings for the Touring Car Masters, and now turns his focus to another of his racing machines, this time it’s to be a 540 horsepower 1989 Nissan Skyline R32 GT-R that Kassulke will enter in Round Three of the NSW Production Sports Car series at Sydney Motorsport Park.

The previous outings for the Outbound Racing Skyline have not left great memories, with its 2012 Bathurst Motor Festival weekend ending in first practice when the engine expired, and returning to the Festival in 2013 without testing, the problems returned to cause a retirement after just three laps of the weekend at the mountain.

With Kassulke’s Savy Motorsport crew being kept busy across his three race entries, the Skyline has had further work completed on its power plant, including changing from the car’s original twin turbo to a single turbo system, both driver and team confident that this weekend will see a strong performance against a full list in the Production Sports series as Kassulke moves from muscle cars and classic exotics to tackle Lamborghinis, Porsches, Mitsubishis and more.

11/06/2013
Stay In The Know
Sign up to the Virgin Australia Supercars Championship Newsletter
We use cookies to ensure that we give you the best experience on our website. If you continue to use this site we will assume that you are happy with it.Ok