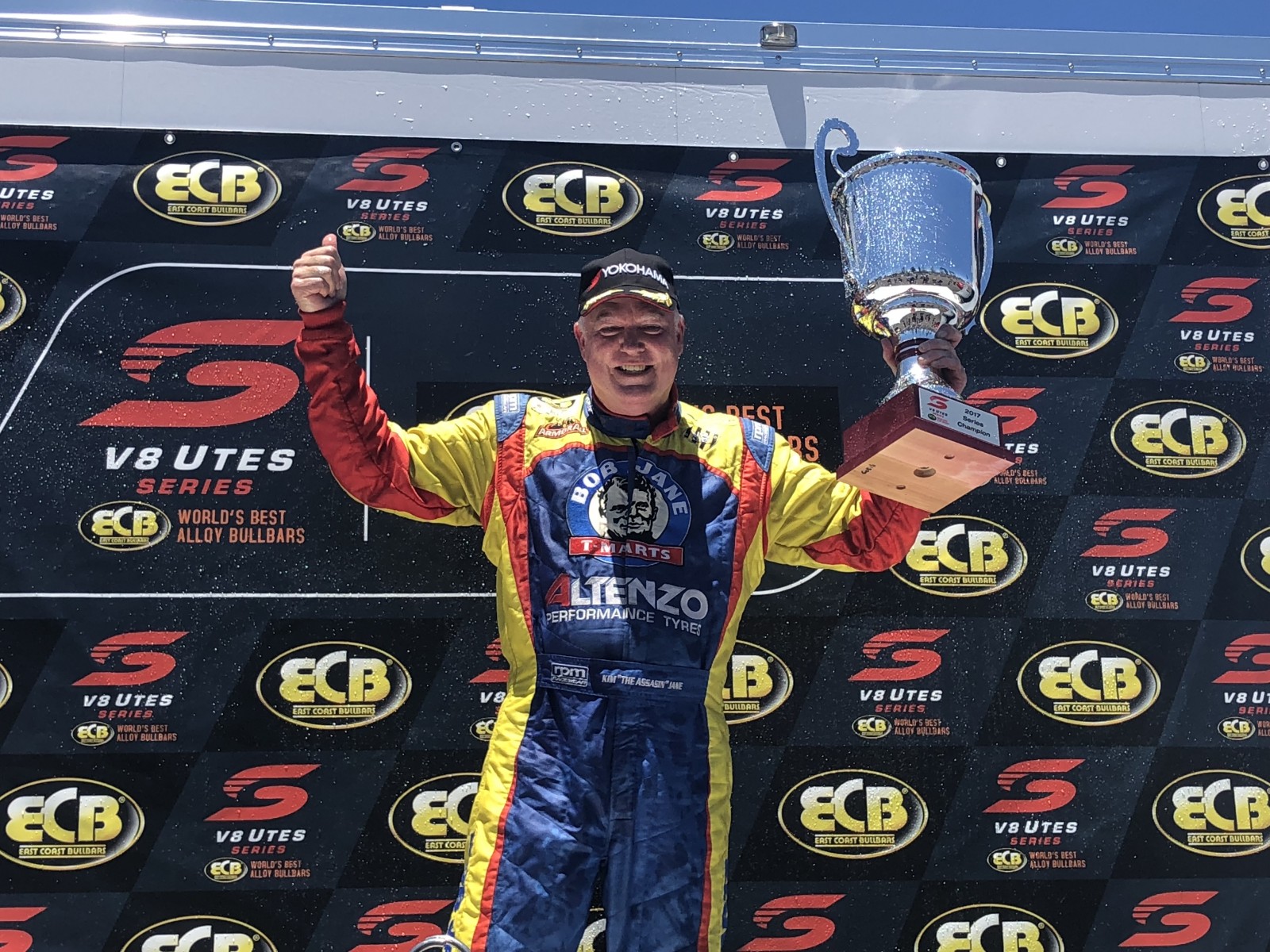 Kim Jane is the last-ever winner of the ECB Australian V8 Ute Racing Series, prevailing by just two points in a thrilling contest that went down to the very last lap of the series’ final race at the Coates Hire Newcastle 500.

After reducing Harris’ lead to 16 points in yesterday’s race, Jane gained another four points on his season-long rival when he won this morning’s reverse-grid race, with Harris finishing third behind Jeremy Gray.

The two title combatants started third (Jane) and sixth (Harris) on the grid for the third and final race, with debutant Matt Griffin on pole ahead of Michael Sieders.

At the start, Jane slotted into third while Harris moved up to fourth after contact with his Peters Motorsport team-mate Aaron Cameron.

However, officials deemed that Harris had been overly aggressive in his move on Cameron, and issued him with a 10-second time penalty.

Harris overtook Jane on the track before the end of the race, but the penalty dropped him to ninth; third for Jane was enough for him to clinch the title.

“I’m feeling a lot of different emotions at the moment,” Jane said.

“Obviously I’m ecstatic to finally win the title – it’s something we’ve all been trying really hard to achieve for so many years.

“This season we may not have had the resources of previous years, but all the crew still worked as hard as ever to make sure I had a fast car at every round.

“I knew we had to keep the pressure on Ryal and in the end it paid off for us. I’ve missed out on the championship by miniscule margins in the past and it’s amazing to finally win one.”

The V8 Utes veteran said he wasn’t aware of the penalty for Harris until the second last lap.

“I didn’t realise Ryal was being penalised until he overtook me, then the crew came on the radio and explained about the penalty," he explained.

"Even at the end of the race, it took a while for the times to come in and to know exactly how many places Ryal was going to lose.

“I’ve loved racing in the Utes, there have been lots of fun races and great rivalries so in some respects I’m a bit sad it’s all coming to an end, but at the same time I’m looking forward to the new SuperUtes era as well.”

Jane ended the weekend third overall behind Griffin and Sieders, who also finished first and second in Race 3.

“I’ve loved this weekend, a big thank you to Peter Ward and the team at Stoneman Race Tech for the chance to drive their Ute,” Griffin said.

“To come into a new category and win straight away is sensational – it’s a shame I didn’t start a bit earlier!”

Second overall for Sieders was his best result of the season.

“Being surrounded by people like my cousin (2016 Utes series winner) Dave has helped me with the learning process, and this weekend on the new track, everyone was on a level playing field,” Sieders said.

The V8 Utes era has now drawn to a close, with the new SuperUtes set to make their debut at next year’s Clipsal 500.