How V8 Utes went from ‘circus act’ to mainstay 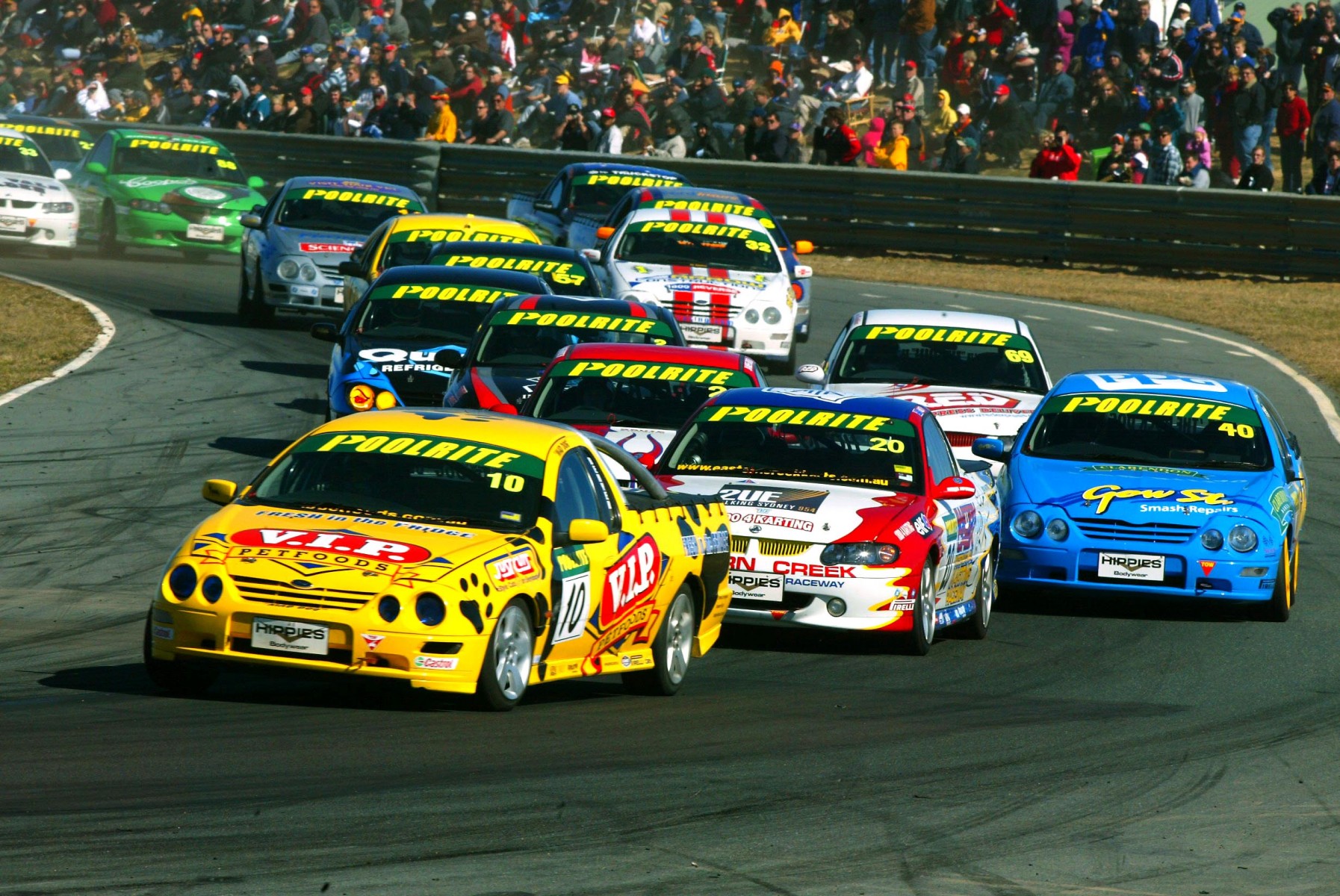 The final round of the ECB V8 Ute Racing Series in Newcastle this weekend also marks the end of the venerable Holden vs Ford format introduced in 2001.

In 2018, the new SuperUtes platform will be introduced with dual-cab, turbo diesel machines from Holden and Ford joined by the likes of Toyota, Mitsubishi, Mazda and Isuzu.

A capacity field of 22 Utes will send the existing format off at the Coates Hire Newcastle 500, with Ryal Harris chasing a fourth title and holding a 24-point lead over Kim Jane.

The V8 Ute Muster, as it was originally known, made its debut with nine production-based Utes at the 2001 Adelaide 500.

It ran under the V8 BRutes name on the Procar card of races before becoming a full-time Supercars support in 2004, taken over by Craig Denyer and Bill West following Procar's demise.

“Remember these are the years before Carrera Cup, before Touring Car Masters, before Aussie Racing Cars, before even the Development Series.

“I sort of came up with the idea along with Ian McAlister, who’s a Ford dealer from Young, and Paul Ryan, who was the Procar PR man at the time.

“The Aussie Ford and Holden Utes had just been re-released with the SS Commodore and the XR8 Falcon at the time, why don’t we have a V8 Ford/Holden Ute series and make it as entertaining as we possibly can, and as-standard production base as we possibly can?

“That’s really how it all started. Ross Palmer, who ran Procar, funded the development of the first Ute.

“I actually bought the first Ute, which became Grant’s [Denyer] first race Ute - and Wayne Park developed it, developed the Holden alongside it and we headed to Clipsal in 2001 with nine Utes.

“The crowd absolutely loved them.” 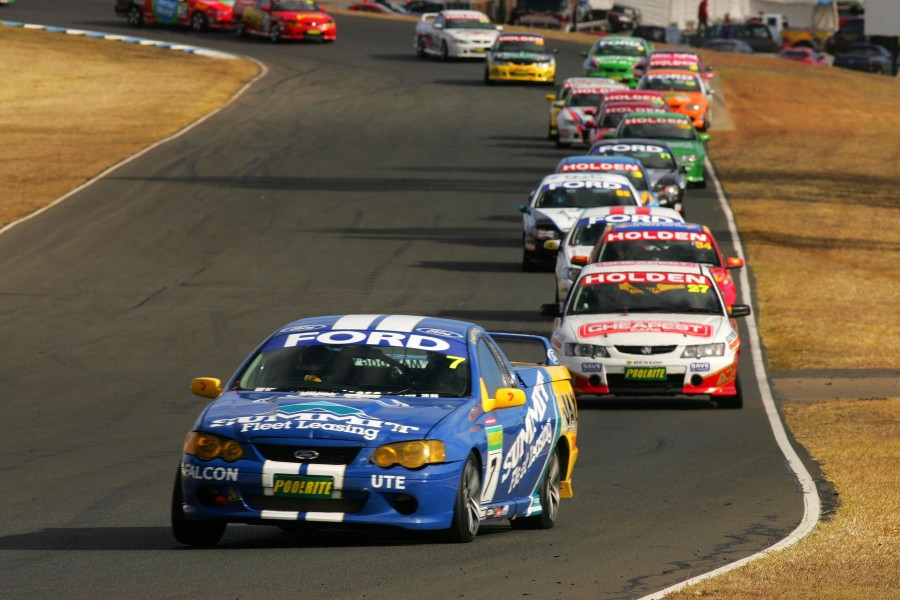 The wins on the maiden event were split by Rod ‘Redline’ Wilson, Damien ‘Ice’ White and Garry ‘Macca’ McDonald, while others in the field included Grant ‘Mad Dog’ Denyer, Charlie ‘Handlebars’ Kovacs and Nathan ‘Not so’ Pretty.

Denyer says the organisational focus was on growing its own identities using those driver nicknames, while a key to the series was its unique method of setting grids.

Forgoing qualifying sessions, drivers picked a number in a ballot that represented their Race 1 grid position, which was reversed for Race 2, with aggregate results combined for Race 3.

“We didn’t have too many 'name' drivers - we gave all of our drivers a nickname, to create our own stars, if you like,” Denyer said.

“[The grid format meant] everyone got a chance to run at the front, everybody got a chance to give some exposure to their sponsors and commercially, from a marketing perspective, that’s really what gave the series a real lift and it went from nine to 32 Utes in a very short period of time.

“Everybody embraced the whole concept. When the drivers and teams saw the fan reaction to the format, and the sponsor reaction to it as well, it really put to bed any of the kind of, I suppose, purist connotations about how motorsport should be run.

“We played it up a fair bit, the initial series was called the V8 Ute Muster rather than V8 BRutes, then it morphed into V8 BRutes and basically grew from there.

“The format gave everybody a turn at the front, so even if you weren’t necessarily a quick driver, you could start on the front row - if that’s where your grid draw was - and it gave them all a great chance at some television exposure.”

Denyer recalls a distinct shift in the series “after seven or eight years”, when “we realised that we probably couldn’t survive long-term just being the clown act at the circus”.

The series was becoming an attractive proposition for young drivers to race in a competitive environment, with reasonable budgets and strong commercial exposure.

After Wilson won the maiden series, Warren Luff stepped up from small production cars and took out the 2002 crown.

That was the year he started his run as a Supercars co-driver, joining Cameron McConville at the Lansvale Racing Team.

Luff doubled up in 2003 before making his full-time Supercars debut the following year with Dick Johnson Racing. 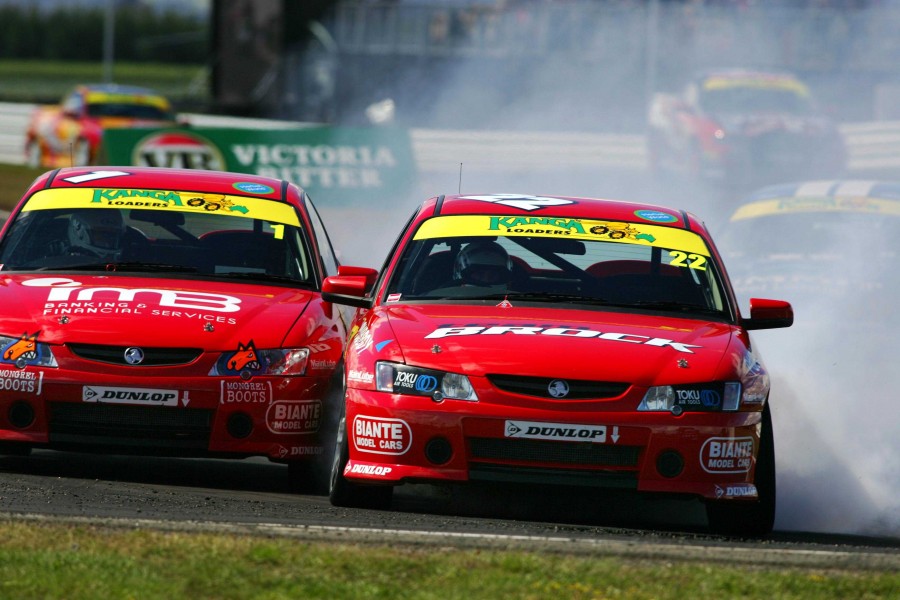 White - above outside team-mate James Brock - won the next two titles before stepping up to Super2, Marcus Zukanovic doing the same after winning in 2006.

“We probably had to clean it up a little bit more and become more serious as a true feeder category,” Denyer said.

“At that stage the Development Series was up and running, so we cleaned up a lot of the eligibility, a lot of the driving standards and made the series - while it still had fantastic racing and still had reverse grids - a little bit more of a serious racing category.

“If you won a V8 Ute title in those days, it was a fairly well-earned title, because it was very, very competitive.

“You can’t forget the names that have come through there and gone on. James Moffat was a V8 Ute rookie of the year, Luke Youlden, Chris Pither won two New Zealand championships and an Australian championship in Utes, Warren Luff, Damien White, Marcus Zukanovic, Dean Canto raced Utes for a while.

“So you’ve probably got half-a-dozen guys that are currently in the Supercars main game, if not full-time drivers but certainly enduro drivers that certainly came from the Utes school as well.”

Those younger drivers were joined for three seasons by two-time Bathurst 1000 winner Allan Grice, while McConville and the late Allan Simonsen also spent time as regulars. 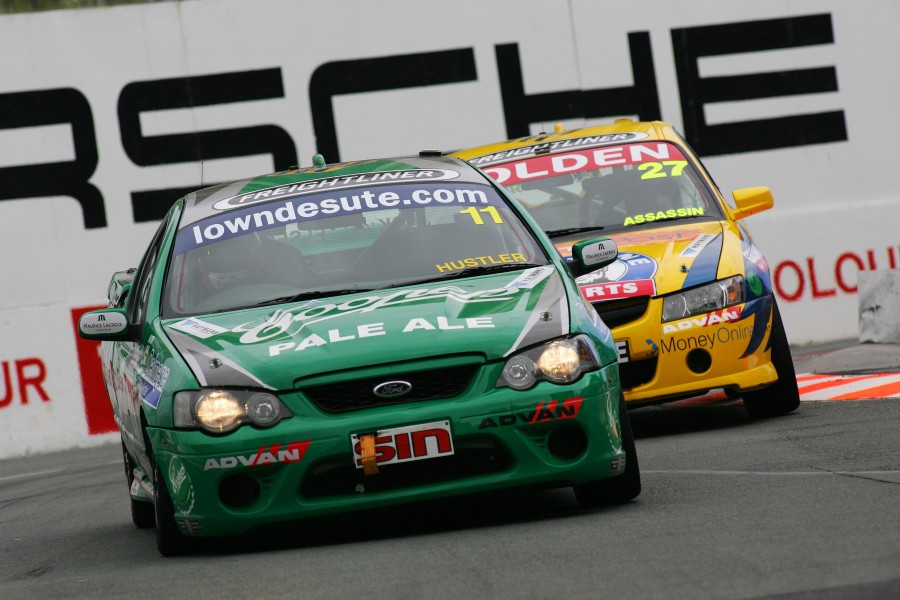 Former rugby league player and 2009 champion Jack Elsegood, above, and country music star Adam Brand were also mainstays, adding to the unique nature of the class.

“I think our core values at the time were that we had to be fan-friendly first,” Denyer explains.

“Number one, the series was all about the fans, what could we do to create the best-possible racing that the fans would entertain and be engaged with and be relevant?

“The vehicles made it relevant, they were essentially standard production vehicles that were modified just to be safe to go racing with.

“At one stage we had Grice, Brock, Jane and Moffat, with James Moffat, James Brock and Kim Jane. There was a fair bit to build from a PR and marketing perspective around the series.”

Interest in New Zealand led to a Trans Tasman Challenge against drivers from the NZ series that started in 2008 and continues this summer.

Talks around what will become SuperUtes in 2018 date back to the turn of the decade, based on how the road-car market was evolving and could further develop.

That has extended the life of V8 Utes in Australia slightly, with this year its 17th and last season.

“I think that probably even surprised us,” Denyer says of the lifespan of the class.

“I don’t think even we thought the Ute series would last 10 years, let alone the 17, pretty much that it’s lasted.

“It did have great longevity and I think part of the success of that was trying to keep it as simple and cost-effective from a competitor point of view.

“So that you could run on the key major events of Australian motorsport like Clipsal or the Gold Coast or Bathurst with a great television package that included live races, and race at a budget that you could afford to race at and be competitive at.

“The other over-rider is that it had to be fan friendly in every way. Balancing those two things are, I think, the reason it’s lasted and been so successful for so long.”