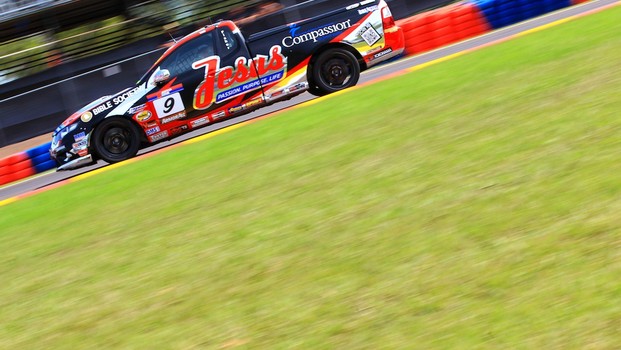 ENZED Drivers Championship leader Ryal Harris didn’t make it through Practice Two today after clipping a tyre barrier in the session, however still came home third fastest in the combined practice times for Round Three of the Auto One V8 Ute Racing Series – protected by ARMOR ALL – at Hidden Valley Raceway, in Darwin.

Overall fastest was Andrew Fisher from rookie Elliot Barbour, Harris, David Sieders, Gary Baxter, Kim Jane, Nathan Pretty and Craig Dontas. Harris was a little disappointed to not get in all of the laps but his first thought was looking after the Tapout Ute for the rest of the weekend.

“The Ute hast plenty of pace, we had a gearbox problem in Practice One and just then got caught up in some traffic – had plenty of pace however I just turned in a little too early coming into main straight and clipped the tyre barrier. It felt alright but I didn’t want to risk it so I came in. Qualifying is where it counts and we’ll have good rubber and we’ll go out and hopefully claim the ARMOR ALL pole award,” explained Harris.

Fisher’s time in his Jesus Ford’s was 1min21.67 and he’s feeling confident for a better round result than he did in Perth (Round Two).

“We have a lot to come back from, I’ve done a couple of tests but until you get back to the track you don’t know if you’ve got it back together, we’re still not quite sure what happened in Perth but now we just have to put it behind us going into Qualifying tomorrow. We know we’ve got good pace in the Ute and I’m driving well here so bring it on!” said Fisher.

Nathan Pretty is back on the Championship charge posting the top time in Session Two.

“I was happy with our pace in Practice Two, to be two-tenths faster than Elliot Barbour. We were off the back foot after the engine failure in qualifying during the last round, however the four race format this weekend will give is a real chance to claw back up the points board.”

“It sounds pretty cool, I watched it at Barbagallo and it looked exciting. I’ve watched Formula One do it quite regularly, so I might have to try and get some tactics from there. I’m definitely aiming to be on podium. The guys have put their faith in me to get a result and bring the Ute home straight. I’ll be trying my hardest to do that and have fun at the same time,” said Pither.

The V8 Utes will hit the track again in the morning for Qualifying at 8:30am, which features a 30-minute session broken up into three individual segments.

Qualifying One will include all 32 V8 Utes and after 10 minutes, the top 20 fastest drivers will continue into Qualifying Two, for a shorter seven-minute session.

The top 10 drivers from this session will then start Qualifying Three, a short five-minute session allowing for a one or two lap shootout. The fastest lap times will then determine the top ten grid for the start of Race one, with the balance of the grid filled as they drop off in lap time from each segment.

Qualifying begins at 8.30am local time.

Race Two will be televised live on Network Seven, so be sure to check your local guides. Race Four will also be televised Live on Sunday.

20/05/2013
Related Content
2013 SKYCITY Triple Crown  ›
Stay In The Know
Sign up to the Virgin Australia Supercars Championship Newsletter
This website uses cookies to improve your user experience. By continuing, you will be providing your consent to our use of cookies.Ok