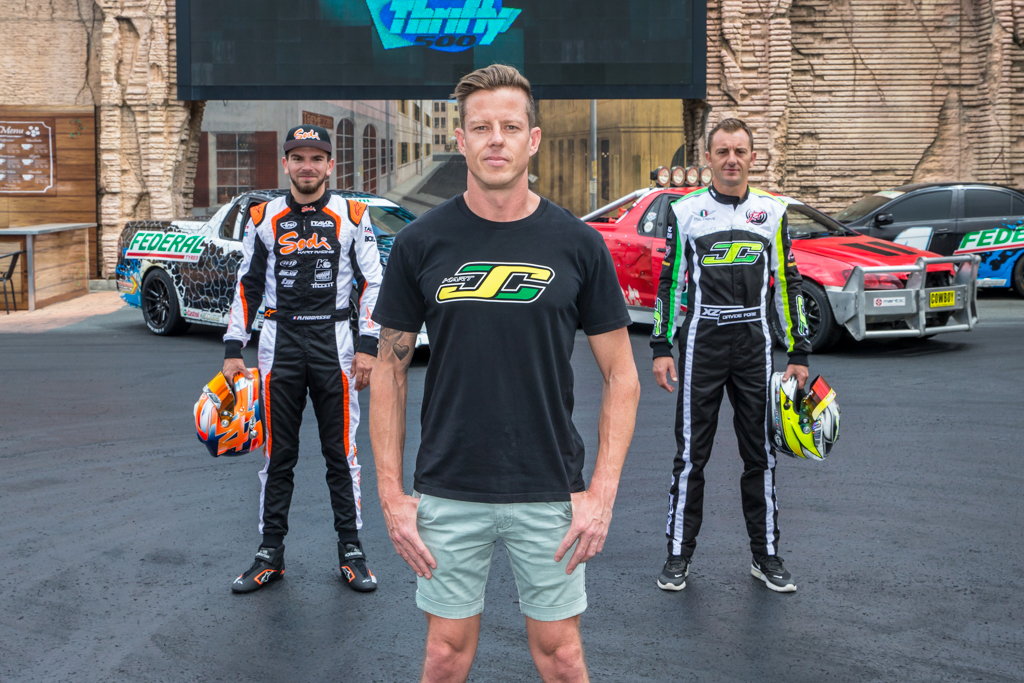 Supercars star and two-time world karting champion James Courtney has greeted European racers Davide Forè and Anthony Abbasse ahead of this weekend’s Race of Stars on the Gold Coast.

The Italian and Frenchman have arrived Down Under for the annual event held at the Xtreme Karting Complex in Pimpama from tomorrow.

It leads into an 11-day celebration of motorsports with the Vodafone Gold Coast 600 Supercars to follow on the streets of Surfers Paradise from 25-27 October.

Ahead of the racing, the international drivers were guests of the Hollywood Stunt Driver Show at Movie World where they got to experience first-hand one of the Gold Coast’s most popular tourist attractions.

Forè, a five-time world champion, will be driving for Courtney’s karting team at the weekend’s event – a partnership that sees the two former teammates from the ‘90s re-unite.

For Courtney, his involvement in running the JC Kart team is a way of contributing to the sport that he has enjoyed so much.

“When I was a youngster racing karts, the European drivers were almost like gods to us,” he said.

“Davide was my team-mate when I was based in Europe and won two World Karting Championships, so for him to now drive for my team is pretty special.

“I’m looking forward to seeing him aboard a JC Kart when practice starts tomorrow.

“The JC Kart team is my way of giving something back to the sport that has provided me with so much over the years and opened up the opportunities for me in my career. “This weekend is going to be a great showcase for the sport of karting here on the Gold Coast.”

In July, Supercars and Karting Australia announced a partnership program to groom Australia’s best up and coming talent.

The second stage, a Junior Development Program, will identify 30 of Australia’s best young drivers and develop their skills through the top level of Australian karting.

Abbasse is the defending Race of Stars Champion and is excited to be back on the Gold Coast.

A number of countries are represented among the list of more than 220 drivers in the seven categories of competition this weekend.

Practice for the event begins tomorrow with qualifying and the heat races on Friday ahead of the finals on Saturday.