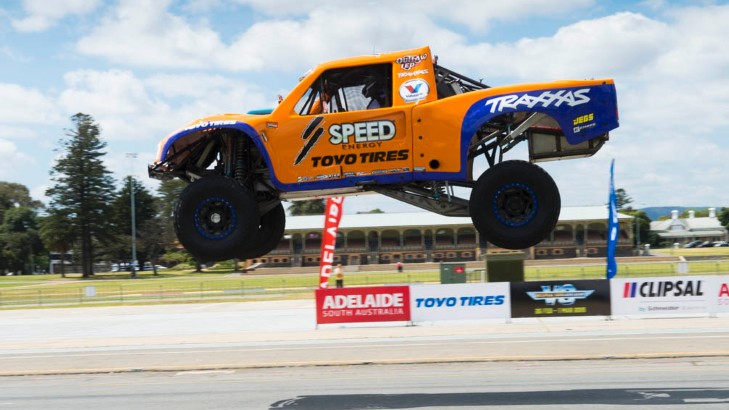 Touted as the world's newest and most exciting form of racing, the 2015 Clipsal 500 Adelaide will be the first time these 600 horsepower V8 trucks will compete for points outside North America.

Owner and headline driver, Robby Gordon provided an exhilarating preview for Clipsal 500 fans today when he took V8 Supercars driver Scott Pye and South Australian Tourism Minister, Leon Bignell for a spin in his 600 horsepower V8 truck, launching it 40 meters through the air on Pit Straight in what will be a teaser to the action-packed entertainment on offer at next year's event.

"The growth of the Stadium Super Trucks Series has been incredible and for us to take our Series outside North America for the first time is a really big deal so we were very selective with which event we chose. The Clipsal 500 is one of the biggest and best entertainment events in Australia so for us it was a perfect fit," Gordon said.

"Our series has a big following in the States, and with up to 15 high powered off-road trucks racing side by side hitting speeds of 240km, launching five metres into the air and 40 metres down the track, it's definitely going to blow the minds of Australian fans."

"We introduced utes to the motor racing scene back in 2001, which regularly rates as the second most popular category for Clipsal 500 fans in post-event polling. Stadium Super Trucks was a huge hit at the X-Games, and we expect they'll be one of the most exciting categories to race around Adelaide's iconic street circuit in 2015," Warren said.

First developed in 2013 from a previous series in the 90's, in 2014, Gordon took the 13 race series to some of North America's biggest markets including Texas, Detroit, Toronto, San Diego, Las Vegas and Los Angeles and the X Games in Austin.

Competition on track is set to be fierce as the trucks literally fly through Victoria Park, featuring drivers from a variety of disciplines and backgrounds. Gordon, the first American to win a stage at the Dakar Rally and a NASCAR veteran of 396 sprint series races is the headline driver in the series, which has also seen Indycar driver Arie Luyendyk Jnr, motocross rider Jeff Ward, Olympic snowboarder Nick Baumgartner and NASCAR driver Justin Lofton compete.