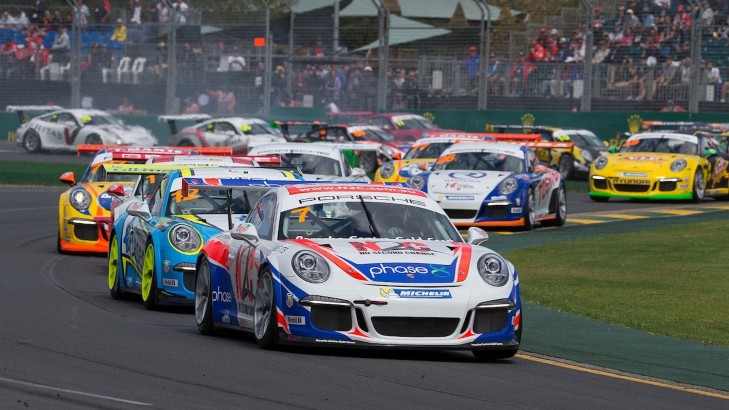 Carrera Cup will hold six of its eight rounds alongside the V8 Supercars in 2015.

The Clipsal 500, Townsville 500, Sandown 500, Supercheap Auto Bathurst 1000 and Gold Coast 600 events are all on the bill, as well as the Formula One Australian Grand Prix, which features as a highlight for the Porsches and also sees the V8 Supercars compete as a support category.

The championship will also visit Sydney Motorsport Park alongside V8 Supercars and venture to the picturesque Phillip Island circuit as part of the Shannons Australian Motor Racing Nationals. Confirmation on the location of the Pro-Am event will be confirmed at a later date.

This impressive event schedule is one reason why Porsche Carrera Cup Australia is considered the most premium motor racing product in Australia, according to Porsche Cars Australia Director of PR and Motorsport, Paul Ellis.

"This Carrera Cup calendar outlines many exciting aspects of the 2015 season. Not only will we see Porsche racing at the best venues in Australia, but we will also receive great exposure from our presence at six signature events in 2015," said Ellis.

"From our on-track presence, professional presentation and high level of exposure for our teams and partners, Porsche will continue to provide a premium experience for those involved in Carrera Cup.

"I'd like to thank our out-going Motorsport Manager Cam McConville for brokering such an impressive calendar and welcome his successor Kurt Sakzewski to the role for what will be a sensational year of Porsche Carrera Cup racing in Australia."