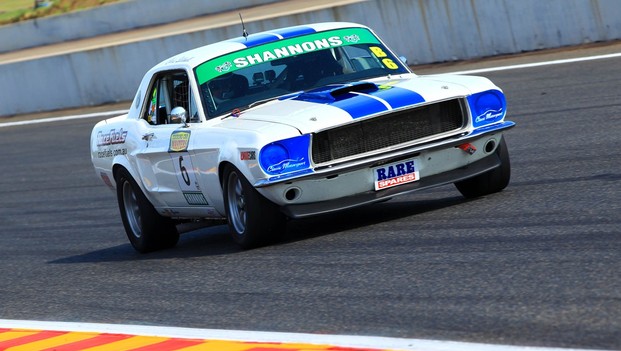 In a drama packed session for the Masters, reigning champion John Bowe has taken another pole in the north, making it five from six pole starts at the SKYCITY Triple Crown, while reigning Pro-Sportsman Champion Chris Stillwell is leading the charge for the Class B contenders as the field takes its next step forward, the top ten meaning this weekend is anyone’s game as the heat and the muscle combine for an all in show, top end racing in the Top End.

The session opened with heartbreak for Steve Makarios as his GTHO Falcon spun down the straight at full pace, hitting the brakes from top speed, the wheel studs sheering sending the left rear wheel past the sideways Falcon, which ended the session sideways into the wall off turn one. As the field prepared to put in their early fliers, there were lockups, wheels into the dirt, the classic machines using all the kerbs for the fine line to find those minor advantages to seek the head of the grid.

Five minutes in and Bowe was at the helm, running under 2012’s lap record pace and spot on for an impressive qualifying turn out, another early indication the Masters will keep getting better with age. For Hidden Valley debutant, Cameron Mason, his Camaro took a spin exiting the hairpin, Gomersall was pushing on as he sought even better times from his SL/R 5000, then Steve Mason was first on sight of the fresh oil at turn six, his Shelby Mustang not pulling up at the turn and ending his session in the tyre wall as the red flag was called.

On the session restart, the field returned to the hot track as pit lane again became the busy place to be. Keene and Mercer were soon in their own off-track runs, more victims of the oil slick. Turn one had cars four wide as more Masters joined their fellow qualifiers from the lane.

With minutes remaining, only four cars remained on the circuit, with Bressington’s HQ rejoining the field to make it five, but most of the field would return to the paddock knowing their early laps would have been their best, the session closing with Bowe on top with a 1:14.92, his challenger from years past, Greg Crick to share the front row, with Michael Almond, Jason Gomersall, Andrew Miedecke, Brad Tilley, Chris Stillwell, Mark King, Greg Keene and Keith Kassulke rounding out the top ten to start Race 1.

“I love this place!" Bowe said.

"I think I was fortunate though as Crick and I got clear lap before red flag and oil went down, so I don’t think necessarily indicative. Honestly, Almond is potentially the quickest over race distance, the heavy muscle cars and tyre deterioration we always have here could mean a one lap wonder, but it’s always nice to have pole and go from the front.

“I can already feel the difference in tyre degradation by the fact that I found 2.5 seconds just by changing the tyres, so the tyres used yesterday and the ones we’ll put on for the race, they’ll become second hand pretty quickly.

“Greg Crick and I are good mates, and this will be the first time we’ve been on the front row together in probably 30 years so with the heat, tyres going off and a very tough field, the racing will definitely be interesting.”

Crick said it had been a good qualifying session, and was glad to have recorded a time in on the out lap.

"Les (Small) had made changes overnight that made it better than expected and took me my surprise, having a lot more grip than I thought," Crick said.

"My lap was pretty conservative, the car has a bit more in it so it will be on from the start and it’s going to be tough but fun racing with the Porsches coming through, Miedecke not far off, so many strong race pairings to come through.

“We’ve got so much support here in the paddock, and we’re even online now (Greg Crick Motorsport on Facebook) so the fans are all around wanting to see the Charger because there’s just something about them that the Aussie muscle car people love, so to get this one up on the front row is more than pretty good.”

Chris Stillwell credited his result to a recent trip overseas.

“I went to the US recently to the Skip Barbour Driving School for Advanced Road Racing to see if I could learn a trick or two and I think it’s worked," Stillwell said.

“We spent the first practice sessions managing our speed, probably running around 85-90 percent to imprint some of the lessons I’ve learnt before going up to full speed in qualifying so we’re more than happy with the result.

“I was lucky to find a spot and get a quick lap in before the interruptions, we bagged the time and we’re very happy. It’s interesting to see some of the cars moving up the field that were consistently in the middle of the group so that’s good for the category and it’ll be a great show.”

22/05/2013
Related Content
2013 SKYCITY Triple Crown  ›
Stay In The Know
Sign up to the Virgin Australia Supercars Championship Newsletter
This website uses cookies to improve your user experience. By continuing, you will be providing your consent to our use of cookies.Ok