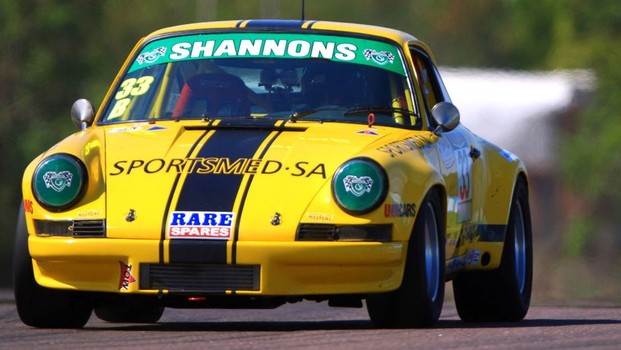 As the Touring Car Masters took to the grid for the opening race of Round Three of the popular classic series at the SKYCITY Triple Crown, John Bowe took his Mustang to the prime position, joined on the front row by long-term friend and challenger Greg Crick. From positions three and four would be the Torana of Jason Gomersall paired with the Camaro of Andrew Miedecke, with a strong set of names and machines taking their places on the tarmac, promising the action would be on across the field.

Missing from the starting grid was Makarios whose qualifying dramas would put him out with no custom wheel studs available to get the strong Synergy powered Falcon back on track for the weekend, while for Bressington, his HQ had also been called to retirement with on-going engine concerns that had plagued the crew since last round.

Off the line went Bowe, but it was Greg Keene’s Porsche making an immediate charge from ninth to fourth by turn one, the SportsMed entry almost a local here in the Territory, and ready to make an impact on the muscle cars ahead. With Brad Tilley under Greg Crick, Keith Kassulke pushing forward, Chris Stillwell took to the inside wall to take his Mustang towards the head of the pack, while Mark King went to the outside to hold position from Gomersall.

Crick’s Charger was on exactly that, a charge, going back under Tilley’s Falcon to reclaim second position at turn three, Garry Treloar made a move on Tony Karanfilovski, and it was side by side battles across the pack heading into the turn six hairpin. Kassulke was ready to take on Stillwell, Steve Mason moved to the inside of Karanfilovski, while Amanda Sparks’ 911 was off at turn one in her freshly rebuilt entry on her return to the series.

Miedecke, Stillwell and Cameron Tilley were locked in battle, as the Sprint of Jim Richards began to close in on the challenge for the top ten. As Wayne Mercer stepped his Falcon wide through turn two, out front, Bowe had pulled a 1.5 second gap, the battles behind allowing the reigning Champion to focus on the open track ahead. Cameron Mason and Gary O’Brien went side by side along the straight, Mason off at turn one, into a slide he couldn’t catch but soon returning to the tarmac to start his recovery mission, while Chevrolet versus Porsche saw Miedecke shooting out from the slip stream on the run to turn one to take seventh from Keene.

Gavin Bullas had impressed from the start, firing his XA Falcon five position up to be at the heart of a Kassulke, Miedecke battle as the laps began to fall away. Gomersall found himself under pressure from Stillwell, Steve Mason was feeling the challenge from Mercer along the fast straight, and O’Brien was now looking to catch Treloar’s Charger as it quite literally fired out of the corners. Wilson was back in business, and working to keep the new spec power plant of O’Neill’s Porsche at bay, with Cameron Mason now closing in.

Richards had found the move, sweeping around the Gomersall Torana on the run out of turn three, with King, Kassulke and Bullas forming a freight train of muscle cars, Kassulke wanting more, pulling out to take King for fifth at the most popular passing opportunity of the valley, turn one as the laps ticked over to mid race. The fight for the top ten placings continued with Gomersall, Cameron Tilley, Stillwell, Karanfilovski and Steve Mason all driving hard to seek the next move forward.

Gary O’Brien’s Holden HQ had been running strong, but on lap seven, began to drift back, the GTS now cruising around the circuit as his competitors powered on past, clear issues but the determination to finish would win out. As Treloar took a spin into the grass at the first corner, a regular sight at the valley track returned, a small grass fire began to burn as the Masters roared on past to tackle the final four laps. Miedecke had taken Bullas for sixth to be on the bumper of teammate King, but Bullas soon fought back to return four Fords to the top five.

After an earlier off, Sparks was recovering well, her Porsche having regained four positions to be back on the verge of the top 15. Bowe’s Mustang still had control, closing in on the struggling O’Brien HQ as he widened the gap to Crick in second, Brad Tilley in his famous sideways, full throttle, full lock action still with the pressure on the second-placed Charger. Disappointment for Karanfilovski, the gearbox giving in to see the Falcon retire at pit exit, but on track there was no moment to rest as the Masters field powered on to the chequered flag with Bowe now more than three seconds ahead.

Crick took to the defensive line to hold the Falcon of Brad Tilley to third, while brother Cameron Tilley was still all over the rear of the Steve Mason Shelby on the final run to turn one. As the flag fell, Bowe would take his fourth win in a row at the valley circuit, Crick holding off Brad Tilley for second, Kassulke, King, Bullas, Richards, Miedecke, Keene in ninth taking our the Pro-Sportsman race victory, while Stillwell rounded out the top ten to place the Pro-Sportsman classed Mustang next to Keene’s Porsche on the front row for tomorrow’s reverse grid Race Twp.

The Touring Car Masters will be back on track at Hidden Valley Raceway with Race Two from 11:10am, and the Race Three finale from 2:20pm live across the country on the 7 network as part of the glamour and action that is the V8 Supercars Skycity Triple Crown.

07/06/2013
Related Content
Bowe Takes Pole, Stillwell Leads  ›
15/06/2013
2013 SKYCITY Triple Crown  ›
Stay In The Know
Sign up to the Virgin Australia Supercars Championship Newsletter
We use cookies to ensure that we give you the best experience on our website. If you continue to use this site we will assume that you are happy with it.Ok