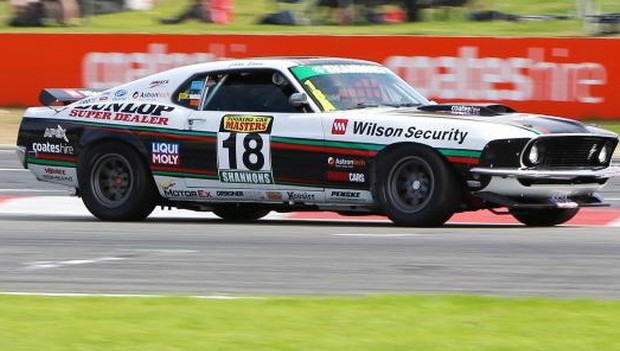 Bowe is the winningestdriver in the category with an enviable record.

From 117 race starts hehas 51 wins, 25 pole positions and 13 lap records. The two-time reigning TCM Champion is also the current points leader after the first two rounds of the2013 Championship.

Last year at HiddenValley, Bowe claimed pole position and went on to win all three races.

Round One of the Championship was held at Sydney Motorsport Park in February, as part of theTopGear Festival and Bowe dominated the weekend, claiming pole position andthree wins from three starts to the delight of the TopGear stars and the hugecrowd.

After just one lap ofthe opening practice session the normally bulletproof ‘Stang suffered an enginefailure, sidelining Bowe for both practice sessions. Undaunted by this earlysetback, Bowe qualified on the front row, second fastest. In the three racesBowe finished second, fourth and eleventh respectively to end up third on thepoints ladder for the round.

Arriving in Darwin forRound Three, and with 36 laps of racing ahead, Bowe has just an eight pointadvantage over long time rival Jim Richards, with Andrew Miedecke also ready topounce on the Class A points leader.

Prior to heading toDarwin, Bowe said: “I am really looking forward to this weekend in Darwin. Thefans are very enthusiastic and love the Touring Car Masters and it’s a greattrack to race on.

“I’ve enjoyed a fair bit of success upthere and hopefully we can repeat our good Darwin form from last year. Jimmy(Richards) and Andy (Miedecke) are very close to me in points, so it shouldmake for a great weekend of racing. It would be fantastic to repeat last year’sperformance and make the long trip to Darwin very special.”

10/05/2013
Related Content
2013 SKYCITY Triple Crown  ›
Stay In The Know
Sign up to the Virgin Australia Supercars Championship Newsletter
This website uses cookies to improve your user experience. By continuing, you will be providing your consent to our use of cookies.Ok