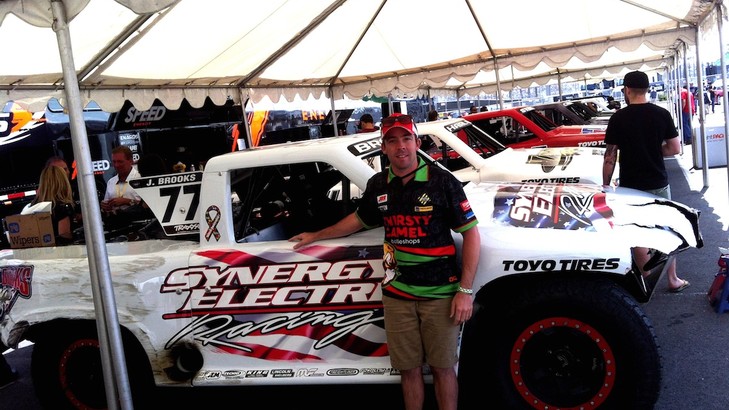 “It’s the 40th running of the event and I wanted to do some research to see similarities between Australia and the US," the South Australian said.

"I also came over here to try and negotiate a couple of positions for Aussie V8 Ute Racers to come and race the SST (Stadium Super Trucks) series at the XGames."

The long-time V8 Ute Racer met up with key organisers of the event during his time over there including Former NASCAR and Indy 500 competitor Robby Gordon, the founder of the Stadium Super Trucks, who loves the B8 Utes series – but felt the category "needs some jumps".

Dontas was excited to hear the enthusiasm the V8 Ute Racing Series had outside of Australia.

“It’s great that the American crew know what we do over here," Dontas said.

"I also caught up with Chris Hecht, the communications manager of the Series and he would welcome any Aussies to come and join the Series."

V8 Ute Category Manager, SPHERIX’S Craig Denyer believes, “there is a lot of interest in light truck racing at the moment, which is very timely considering the proposed new evolUTEion V8 Ute platform in 2016. It would be great to think that there might be an opportunity for Aussie and American racers to cross over and race in both countries.”

Dontas has the 2014 ARMOR ALL V8 Ute Driver’s Championship title in his sights, currently sitting second in the points, with the second round to be held as part of the Perth 400 at Barbagallo Raceway, running from May 16-18.

“I’m not getting ahead of myself, there is a long way to go until the end of the Series, but our aim is to stay consistent and we should be able to hold onto our current position,” said Dontas.

Tickets are available now for the Perth event, which has a range of categories supporting the V8 Supercars, with the Dunlop Series, Aussie Racing Cars, Super GT and Historic Touring Cars also running across the meeting.