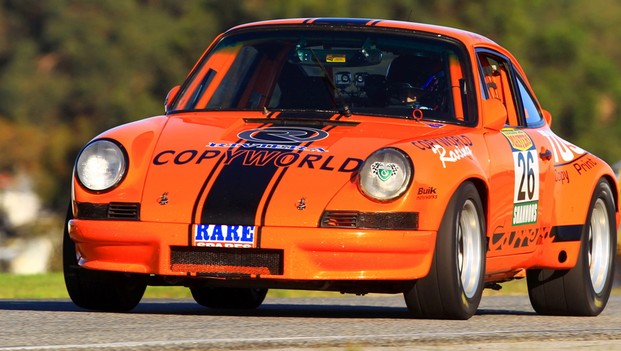 After a season away from the challenging tarmac of Barbagallo Raceway, the Touring Car Masters were back at full noise for morning Qualifying as Michael Almond charged his Copyworld Racing Porsche to the top of the timesheets, maintaining consistent pace in the fresh entry to Class A (Outright), while Chris Stillwell’s Mustang was again on the pace, dominating the times of the Pro-Sportsman entries.

Having been well placed at the helm during opening practice, Abelnica led the full field back on track and was immediately on the pace, with the top three soon into the 1min03s and looking comfortable as they became the hunted as the muscles and exotics pushed hard, two wheeling through the corners, and getting the power down with fresh rubber in the warming conditions.

Disappointingly for new-comer Vining-Falvey, the session would end too early as his Thunder Road Racing Australia Mustang Coupe became unsettled, returning to the pits to find a hole in the sump, the Savy Motorsport team left to assess the options of continuing. Alexander looked to be cruising as the Corio Auto Parts Monaro glistened on track, while Walmsley, Kassulke and Freestone, all having softened their setup ahead of qualifying, were hoping to be strong, Walmsley’s wheels.com.pg Monaro again featuring in the top five.

Richards and Keene were side by side as they pushed on to find a golden lap, sadly for Keene, a fuel issue meant the #33 Sportsmed Porsche was back to the pits, a hoped quick fix seeing a strong weekend yet to come. Reigning Pro- Sportsman champ, Stillwell’s Mustang was comfortable inside the top ten, a new engine and new cam profile giving more grunt across the rev range, the series Director happy with his two flying laps.

Pit lane was busy with classics, but on track it was still the #26 Porsche of Almond heading the times, and happy with an impressive six lap stint, returning to wait out it as Richards, Abelnica, O’Brien, O’Neill and Mercer remained on circuit, all looking to move ahead. The new 3.6 litre power plant in the lighter Copyworld Racing 911 had done its job earlier than expected, Almond securing his maiden Touring Car Masters pole position just days after celebrating his birthday, and just two weeks after capturing his maiden round victory in his Copyworld Racing Porsche GT3 Cup challenger, the delight evident on one of the young faces of the series.

“It’s very exciting," Amond said. "I didn’t quite expect this, but I had been told (Barbagallo is) Porsche friendly and that looks to be the case. The car felt strong through turn one and the twists, so it was head down, get a good gap, and put in the good times.

“Porsche is the only thing I know, I’ve never raced any other car, and the ‘73 earlier model and the later model I race have similar characteristics and complement each other, so I think that helps me to progress quicker than normal.

“We’ve taken a little weight out since the class change, and the different specs of the car in Class A have certainly helped us. I had been feeling a little pressure, but now that I’ve got pole, that feeling has subsided, but now I’m a bit nervous with names like Bowe and Richards next to and behind me, so I need to do all I can to try and stay up the front because I’ve got experienced drivers right on me.”

Ahead of this afternoon’s race, there’s no doubt Bowe will be wanting to take the lead early on after the Dunlop Super Dealer/Wilson Security Racing machine headed out to Qualifying, with fellow Master Steve Makarios keeping a close eye on the new engine, the team now confident of a reliable and strong weekend for the dual champion, while for Almond, it’s a new starter motor going in to ensure his weekend continues on the right track.

23/04/2013
Related Content
2013 Chill Perth 360  ›
Stay In The Know
Sign up to the Repco Supercars Championship Newsletter
We use cookies to ensure that we give you the best experience on our website. If you continue to use this site we will assume that you are happy with it.Ok