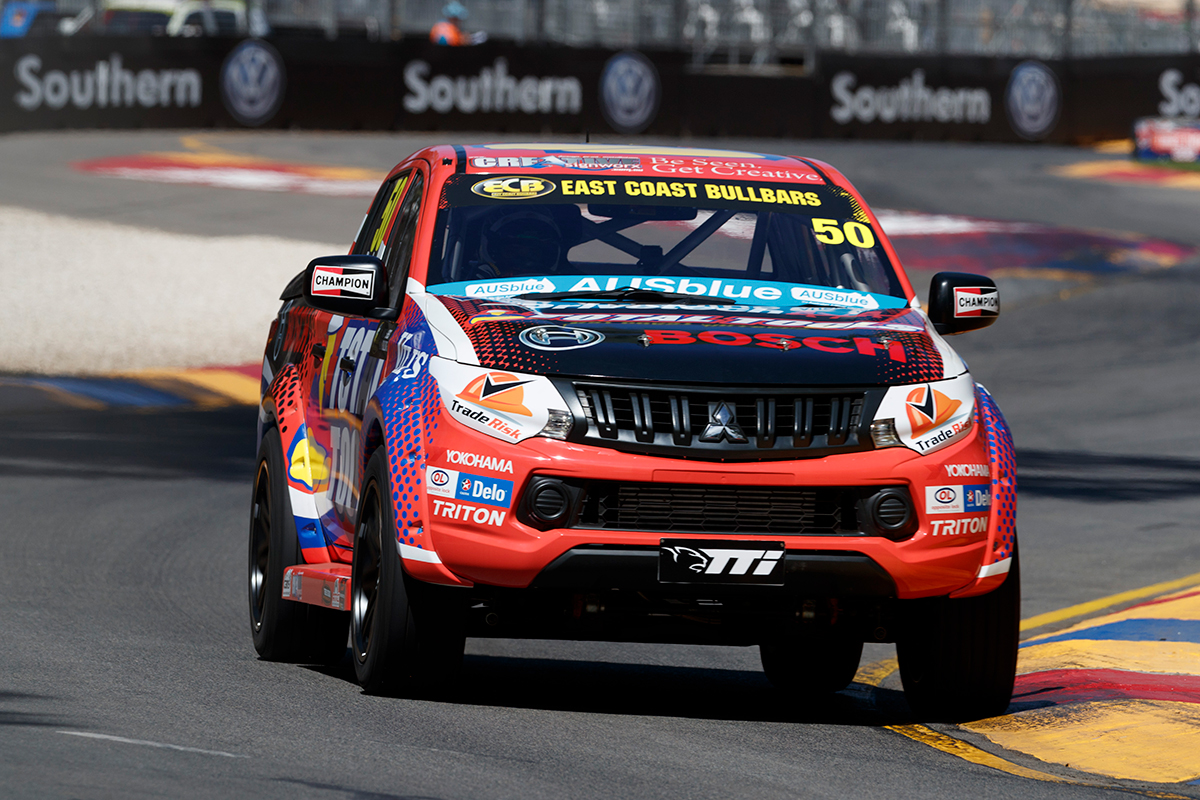 The former V8 Utes regular is racing one of the factory-backed Team Triton entries run by the Sieders Racing Team, Dakar Rally winner Toby Price in the other for the bulk of the campaign.

In the first event with the turbo-diesel machines in Adelaide, a jammed turbo in the opening race set the tone for Dontas, who ultimately finished 10th, sixth and fifth in his Total Tools-backed entry.

The Mitsubishis were among the SuperUtes at Victorian circuit earlier this month for a test ahead of the second round of the series at the Winton SuperSprint on May 18-20, which Dontas found massively positive.

“Basically from Adelaide to Winton it was day and night,” Dontas told Supercars.com.

“We achieved a huge amount of performance, but it was more about reliability and drivability.

“[SuperUtes engine expert] Craig Hasted has done an amazing job rejigging the engine characteristics, in terms of engine internals and sumps, they did their homework away from the track.

“We worked through a program of turbo mapping and drivability, and we turned the car into more of a racecar then what we would have achieved in six months off track.”

Price’s Triton enjoyed a smoother run in Adelaide, and sits second in the points behind the Sieders-run Toyota Hilux of Craig Woods.

Barbour is expected to stand-in for Price when the latter’s off-road racing commitments clash with SuperUtes rounds.

“If anything Toby will be more competitive and we'll be too, so both the red rockets will be somewhere firing up the front.”

Ahh nice to be back in my other office #teamtriton

Dontas believes the package has more to offer, as the field grows to six brands at Winton with the debut of the Isuzu, stating that "there's no doubt the Triton is probably at the lower end of the performance scale."

“I still think we've got work to do on the performance, in terms of making the car a little bit faster, but I think our car is one of the better handling vehicles,” Dontas added.

“Winton will be another event where we'll be learning and once we get to Townsville it'll be more about racing and the championship.

“We always knew the first year we were going to learn a heap, as it's a brand new start-up category, with new manufacturers and not a lot of information.

“There's no doubt we'll be competitive, as from where we were time-wise at the test day we're on par with the Hiluxes, so I think we'll be there.

“I think we're probably going to need some further upgrades to get more performance out of the engine. It's not just about us going further, it's about getting the other manufacturers all moving forward as well.”